America's Providential Heritage In a Godly Inspired Rule of Law "Freedom is never more than one generation away from extinction." Ronald Reagan 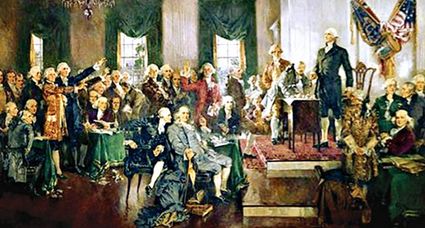 With great excitement and full understanding of God's Providence of his voyage, Columbus proclaimed:

“It was the beginning and the end of this enterprise that it should be for the increase and Glory of the Christian religion.”

In America's very first covenant, “The Articles of Confederation,” Christian principles were laid out clearly as teachings from the Bible. Our founders and early Christian leaders sought to incorporate our legal and political principles which were in complete harmony with Scripture.

“All Scripture is inspired by God and profitable for teaching, for reproof, for correction, for training in righteousness: that the man of God may be adequate, equipped for every good work.” II Timothy 3: 16-17

Even in our earliest history, our founders sought to place Christian principles as essential in the legal and political systems of civil government. Thanks to the Pilgrims and the Puritans, they were truly an example of living out the truths of Biblical principles in law and government.

The Articles of Confederation could truly be called our “First Constitution.” It was framed during the War for Independence by the Continental Congress in 1775. The references to God in the Articles are clear:

a. proclaiming that God governs the world

b. proclaiming the Lordship of Jesus Christ.

The papers of the Continental Congress are filled with references, such as “the Divinity,” “the Lord of Hosts, ” “Creator of All,” “Supreme and Universal Providence,” and "Jesus Christ."

This month we wish to embrace the U.S. Constitution and its relationship to the Bible. You can understand that the Constitution gave us the Rule of Law adequate to secure the American Federation. The world had never seen such a thing as individual self-government, with union, lived out in a nation.

James Madison was so passionate about what he called “the capacity of mankind for Self-government.” The passion was demonstrated in our Constitution where religious and civil liberties were secured. Our Founders gave us the first truly Christian Republic. Can we keep it for our children and grandchildren? The answer is evident. We cannot keep it unless we have the Christian character and unless we embrace this U.S. Constitution.

Maintaining the character of American Liberty requires the faith of Biblical Christianity and an Education that embraces our true History, and preserves the Constitution as the Rule of Law.

Ronald Reagan said, "Freedom is never more than one generation away from extinction. We didn't pass it to our children in their bloodstream. It must be fought for, protected, and handed on to them to do the same, or one day, we will spend our sunset years, telling our children and our children's children, what it was once like in the United States where men were free."

As we study and embrace our Constitution, let us pray for the judges and the courts of our nation, to embrace and rule by this Rule of Law. Americans have been so tempted to take the Constitution for granted. It cannot last unless we understand this document and take the responsibility for its continuance. This Constitution has been a beacon for people from all over the world, dreaming of freedom.

The Constitutional Convention took place from May 25, 1787 to September 17, 1787 and George Washington was elected President of the Convention. In less than 100 working days, they produced our Constitution. This Constitution, in the Philadelphia Convention, was framed by delegates from 12 of the 13 colonies.

“We the People of the United States, in order to form a more perfect Union, establish Justice, insure domestic Tranquility, provide for the common defense, promote the general Welfare, and secure the Blessings of Liberty to ourselves and our posterity, do ordain and establish this CONSTITUTION for the United States of America."

Article II - Established the power of the Executive Office. The President will hold the term for 4 years. He (or she) must be a natural born citizen, 35 years old, and a 14 years or longer resident. The President shall be Commander in Chief of the Armed Forces, head of the President's Cabinet, etc.

Article III - The Supreme Court was created September 10, 1789, with John Jay as the First Chief Justice. All judges are appointed by the President, with the advice and consent of the Senate. The Judicial powers of the United States are vested in the U.S. Supreme Court.

Article IV - Dealt with the Relations with The States: Public Acts, Records, Proceedings, Rights of Citizens, New States to be admitted, how states are formed. Each state was promised the Republican form of government.

Article V - The Congress, whenever two-thirds of both Houses shall deem it necessary, shall propose Amendments to this Constitution, or, on the Application of the Legislatures of two-thirds of the several States, shall call a Convention for proposing Amendments.

Article VI - The Constitution proclaims this to be the Supreme Law of the Land, and the Judges are to be bound by the Constitution.

Article VII - The Ratification of the Conventions of nine states, shall be

sufficient for the Establishment of this Constitution between the States so

By July, 1788, the President of the Continental Congress announced that the required number of States had ratified the Constitution. The ratification of the Conventions was done with consent of the states present the 17th day of

Article I - Proclaims Freedom of Religion, Speech, Press, Assembly, and to

The Constitution gives us the Right to Worship as we wish without interference of government. It gives a publisher the right to publish the news, and to voice his own opinion, that of free speech.

Article II - Gives us the well regulated Militia being necessary to the security of a free State, the right of the people to keep and bear Arms, shall not be infringed.

Article III - Provides for the care of soldiers.

Article IV - Gives us security from Unwarranted Search and Seizure.

Article VI - Deals with Criminal Cases and the Rights of Accused Persons. 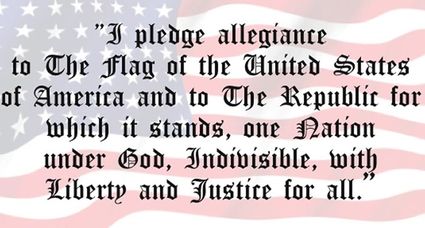 Article IX - Deals with the enumeration of rights to make sure that they are not construed or denied.

Article X - Provides that the powers not delegated to the United States by the Constitution, nor prohibited by the States, are reserved to the States respectively or to The People.

Could everyone reading this article today, take a moment and make a personal pledge:

"I pledge allegiance to The Flag of the United States of America and to The Republic for which it stands, one Nation under God, Indivisible, with Liberty and Justice for all."