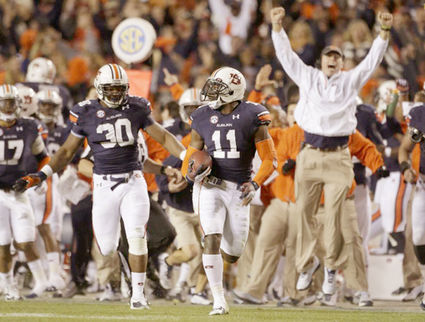 On November 30, 2013, the football world was shocked into reality and the BCS race to the national championship was shaken to its knees as the underdog Auburn Tigers miraculously pulled another miracle out of "Malzahn the Magician's" hat. A new but similar bumper sticker will proudly adorn millions of Auburn cars after the Tigers' Chris Davis returned a missed 57 yard field goal attempt by Alabama's Adam Griffith, from nine yards in his own end zone, for the touchdown that ripped the heart out of the Bama Nation. With no time on the clock the kick sailed slightly right and short to Davis, who had just been substituted by Malzahn for the regular safety on field goals. This was one of many moves that Coach Gus Malzahn and his staff made to keep Auburn in the game against a far superior Alabama team. The Alabama field goal team must have all watched the flight of the ball instead of covering their defensive responsibilities, because by the time Chris Davis reached the fifty yard line, there were no Alabama players in sight, only Auburn players running backwards and forwards escorting Davis to the promised land. Auburn fans flooded the field at Jordan-Hare Stadium - Auburn 34 - Alabama 28.

With the game tied 28-28, Alabama's T. J. Yeldon made a nice run into Auburn territory and headed out of bounds to stop the clock and give Alabama one last heave by A. J. McCarron to the goal line. In an unbelievable set of circumstances, the officials ruled that the clock expired before Yeldon's foot touched the ground out of bounds. That would have sent the game into overtime. A conference incurred where Coach Nick Saban was adamant that there was still one second on the clock when Yeldon went out of bounds. The play was reviewed by the replay officials who finally agreed that the double zeros had not come up as the play ended. There is no 1/2 second or 1/4 second available on any game clock. So, Saban won the worst argument of his career. One second was put back on the clock. Millions upon millions of people watching the game in person or by television were prepared for All-American and Heisman Trophy candidate A. J. McCarron to throw one in the end-zone and hope one of his guys would come down with it. However, Coach Nick Saban sent out his back-up kicker, who does have better distance than the regular kicker, Cade Foster. Adam Griffith had only tried a few field goals in his career at Alabama. But, whose to question Nick Saban!!! If you can possibly find a tape of the ball game, you can look back and understand why this writer has been saying that Gus Malzahn is a better "game day" coach than Nick Saban.....

As bad as Alabama played, there is no doubt in my mind - Alabama would have won the overtime. But because of Saban, there was no overtime.

Now, what does this do to Alabama and what does it do to Auburn. The loss will probably send Alabama to the Orange Bowl, a game that few will be interested in. The win puts Auburn in the SEC Championship Game in Atlanta against the very stingy defense of the Missouri Tigers, who won the Eastern Division with a methodical romp over the late, great Johnny Manziel. That could be the end of the line for this team of destiny, the Auburn Tigers. But, quite frankly the end of the line should have been against LSU, Mississippi State, Texas A&M, Georgia and Alabama. The Tigers are still standing tall!

What if Missouri beats Auburn. Missouri will go to the Sugar Bowl as SEC Champions and Auburn will have to lobby for a good bowl game. Missouri has an outside chance to reach number two in the BCS.

What if Auburn beats Missouri? The picture is not as clear. Alabama's loss to Auburn will knock them out of the national championship picture and out of the top three in the BCS standings. Auburn will move up to number three. This leaves Florida State undefeated and only Duke to play in the ACC Championship Game next week. Ohio State, the number three team for several weeks, and still undefeated, will move to number two behind Florida State. Michigan State will play Ohio State in the Big-Ten Championship Game. The Spartans are sporting a 10-1 record and the best defense in the country. Ohio State barely escaped with a 42-41 win over an average Michigan team (7-5) on October 30. Michigan State is not a threat to overtake Auburn in the BCS standings because of strength of schedule. A loss by Ohio State to Michigan State will put Auburn at number two and in the National Championship Game against Florida State. Even a "bad" win by Ohio State over Michigan State could slide Auburn into number two because of strength of schedule.

First things first! Auburn must beat Missouri in Atlanta for any of this to make any difference. A loss to Missouri or a decisive win by Ohio State on Pearl Harbor Day will end the "Team of Destiny's" chance for a shot at Florida State.

From whence they came (3-9) to a chance to play for the national championship is a miracle unlike any this writer has seen in following college football for over 60 years.

The statistics for the Auburn-Alabama game are very close. The only two that matter are: Auburn, 52 rushing plays for 296 yards - Alabama, 35 rushing plays for 218 yards. If Alabama had rushed 52 times, Auburn would not have been in the ball game. The other is the fact that Alabama missed four field goals, any one of which could have won the game.

The Alabama national dynasty is over. What will be the outcome of this on the state level is yet to be determined. Malzahn's "Team of Destiny" plays on. What can Coach Gus Malzahn do next year that will top this year. He has set the bar high. At this point, Auburn people have no thought of next year. They are floating on the clouds of 2013...a year that will live in infamy for the Alabama Nation.

On Saturday, December 7th at 11:00 A.M. a new and different television show will premier in Montgomery, Alabama on Fox-20. THE SPORTS PAGE will be hosted by former Auburn quarterback, Charlie Trotman, former Alabama State football star, Ricky Cotton and former football coach, Ed Jones, who is presently the Sports Editor for The Alabama Gazette. The 30 minute program will feature interviews with prominent sports figures from around the country along with dynamic video of teams and coaches here in the south. This new and innovative program is being produced by Eddie Harris, who is a member of the Fox television crew that brings professional football into your homes each Sunday, and a former member of the production crew at WSFA TV here in Montgomery and Rich Walker, who has taught television production for many years here in Montgomery High Schools.

The theme of the show will primarily focus on college football. However, there will be coverage of high school and professional football and other sports as time and interest allow.

THE SPORTS PAGE will lead the viewers into the biggest college games on Saturday. You will be entertained by the best footage and best sports commentary in Alabama. This program will be "Football Year Round".

As the BCS National Championship picture begins to formulate and the two top teams are chosen, THE SPORTS PAGE will keep you up to date on "America's Favorite Pastime". Nowhere but in the south do people follow college football with the passion of a religious experience.

Join THE SPORTS PAGE every Saturday at 11:00 am for the best in sports.