2014 is here and the Alabama Legislature will shortly be meeting to consider what bills will and will not pass. This is an election year so I really don't think that our representatives and senators will tackle too many controversial bills and I will bet that they will adjourn early enough this year to get home and begin to politic. I guess this is a good thing because they will not be considering more laws that are not needed but appear only because of special interest groups who can afford to hire lobbyist.

Montgomery has a new representative, Dimitri Polizos, who is also the owner of the restaurant, Mr. Gus'. He is not a lawyer, which in my opinion, is one of the things wrong with the legislature today; too many lawyers! He was a county commissioner for many years and I got to know him as a conservative who supported law enforcement and who was very fiscally responsible. I know that he will continue this way of thinking at the State House.

The new Alabama-NRA gun bill has been in effect since August and most of the snags have been worked out. It appears that many people think that just because they have applied for a concealed carry permit, they should be issued one. There have been literally hundreds of people who have applied and blatantly lied on their application about simple things such as being arrested in the past. It is pretty simple, if you have been convicted of a felony or a domestic violence charge, you are forbidden by State or Federal law from possessing or owning a firearm. If you have had mental problems in the past, you will be turned down. If you have a disqualifying conviction, the only way to have a pistol permit issued is to get a pardon that restores your firearm rights. If you have a conviction under state law you must apply for a pardon through the Alabama Department of Pardons and Parole. If you have a conviction under a municipal code, you must apply for a pardon through the mayor of the city in which you were convicted.

If you show an arrest for a charge that may disqualify you from possessing a firearm and the background check shows no disposition, you will be required to go to the clerk of the court in which you were charged and bring back a disposition of that case. We will not issue you a permit until we receive that disposition showing the case was either nol-prossed or you were acquitted of the charge. No matter what, do NOT lie on the application. That alone is enough to deny your application!

We are also required to issue permits to persons who are 18 or older. Be aware that if you are under 21 years old and have received a permit, there are 39 states that will NOT honor the permit. You can and probably will be arrested if you are caught in one of these states. The following states will NOT honor any handgun license or permits issued to a person under the age of twenty one:

Check the Alabama Attorney's web site for states that reciprocate with Alabama. Even though Alabama honors all other states permits, several will not honor Alabama's permits. Do not get caught unaware because chances are that you will be arrested in those states. 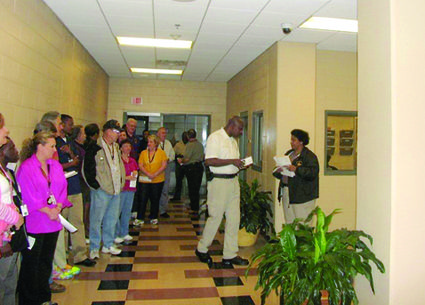 The Montgomery County Sheriff's Office is now accepting applications for our next CITIZENS ACADEMY. The Citizens Academy was established in 1997 to educate the citizens of Montgomery County on how the Sheriff's Office operates and to promote public safety among or community members. Classes are designed to be interesting as well as informative. Citizens are given an opportunity to ride with a Deputy on patrol, tour the County Jail, train on the Firearms Training Simulator and volunteer at events that are sponsored by the Sheriff's Office. To qualify for our Citizens Academy you must be a resident of Montgomery County; be at least 21 years old; pass a criminal background check and attend weekly classes.

The Citizens Academy is a FREE 6 week course that meets on Monday evenings from 6:00 P.M. until 7:00 P.M. at our office located at 115 S. Perry Street. All material will be discussed during the meetings an