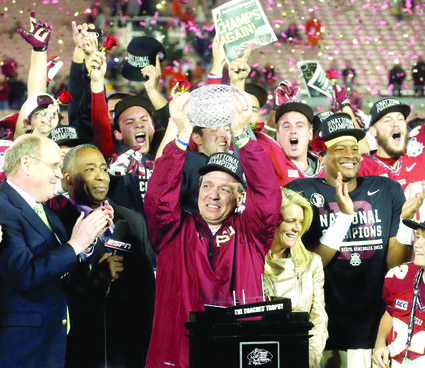 Coach Jimbo Fisher holds up the Coach's Trophy after winning the BCS Championship in Pasadena, surrounded by his team and fans

For 59 minutes and 47 seconds Auburn outplayed the number one team in the nation in the 2014 BCS Championship Game in the Rose Bowl. But Jamies Winston earned his Heisman Trophy by taking his Florida State Seminoles 80 yards in one minute and six seconds to complete a two yard pass to Kelvin Benjamin with 13 seconds left on the game clock, tearing the heart out of the Auburn Nation.

Trey Mason had just put Auburn back in the lead 31-27 with a brilliant 37 yard run where he had to break several tackles to get free. The clock read 1:19. Auburn had just won the national championship. Not true! Auburn only had to keep Florida State's receivers in bounds and run out the clock. They succeeded for one minute and six seconds, but Winston threw a high pass in the end zone to 6-4 Benjamin who was well guarded by 5-11 Chris Davis. Benjamin went higher than Davis could go. Game over! Winston was magnificent at the end. With the clock running down and Auburn in control, Winston completed 6 of 7 passes, most where the receiver could get out of bounds to stop the clock.

As hard as it was to swallow, Auburn people can be proud of how hard the Tigers played. Auburn lead 21-3 until Auburn missed a field goal. Then FSU drove for a touchdown at the end of the half to cut the lead to 21-10. Auburn would not dominate the second half as it has done all year. FSU outscored Auburn 24-10 and had the Tigers on the ropes twice, but they fought back like champions every time. I guess you could say, Auburn didn't get beat. They just ran out of time. They should have never been in the National Championship Game. Auburn was a 7-5 or 8-4 team before the season. However Coach Gus Malzahn worked his magic and took the Tigers all the way to the top. That's why I call him "Malzahn the Magician". As in any game there were some plays that I thought hurt the Tigers. Running wide against the Seminoles lost yardage every time. Too many passes were attempted when a give to Trey Mason would have been the better choice. Mason gained 195 yards. He was good for 60 more which would have won the game for Auburn. I knew that I would have to say it some day. Malzahn was outcoached by Jimbo Fisher. Fisher made the adjustments at half-time that put a stop to quarterback Nick Marshall breaking loose on the second phase of the read option. Marshall played a great game obviously and had the Tigers in position to win. Unfortunately he does not play defense too. Marshall threw for two touchdowns and ran for one. Auburn is a three head monster on offense but only two heads were effective.

Credit should be given to Coach Ellis Johnson, whose defense kept the number one offense in the country at bay for all but 13 seconds. The defensive line put pressure on Winston all night. Special blitzes with the linebackers, safeties, and corners were responsible for several sacks of Jamies Winston which rattled him for a while. Nobody had ever done that to him. Dee Ford and Nosa Egue were especially effective from their defensive end positions.

Jamies Winston struggled most of the night but was near perfect on the last desperation drive which won the game for Florida State. He complete 20 of 35 passes for 237 yards and two fourth quarter touchdowns.

All-American kicker Roberto Aguayo's second field goal accounted for the only points by either team in the third quarter as both defenses took charge after a frenetic first half. The powerful seminoles trailed by 18 points in the second quarter and 21-10 at half-time. However, they picked up momentum in the third quarter with solid defensive play and improvement by Jameis Winston who was fighting a case of big game jitters. Auburn was relentless on defense in the first two quarters. The Heisman Trophy winning freshman completed only 6 of 15 passes in the first half on his twentieth birthday. With Florida State's win, Winston became the first freshman to win the Heisman Trophy and the national championsip. I tip my hat to him. I had underrated Winston.

Winston really had a rough time in the first-half. He even had a fumble caused by Dee Ford which led to a four yard touchdown by Tre Mason. To put it mildly Winston was rattled by the fierce Auburn defense. He did collect himself in time to lead a 66 yard scoring drive late in the first half to cut Auburns' 21-3 lead to a manageable 21-10 lead. In my opinion, that's where Auburn lost the game. When you have your boots on the enemies neck, never take your foot off.

After trailing for the first time in any game since September 28, Florida State needed a big finish to become the first team to come from a half-time defcit and win the BCS title game.

Nick Marshall, Winston's counterpart, looked sharp during the whole game. Auburn was the nations top rushing team, but Coach Gus Malzahn showed that the SEC champions could fling it as well, Auburn gained 232 yards of offense in the first half. Mason caught a 12 yard TD screen pass in the first quarter and Melvin Ray caught a 50 yard touchdown pass over the middle in the second quarter.

Florida State faced its first half-time deficit of the season. Auburn missed an easy field goal which turned out to be the difference in the final score. But, on the next possession, Auburn's Angelo Blackson swatted the ball out of Winston's hands. Marshall then finished a short drive by turning the corner on Florida State's defense for a score. That was the last time Marshall could be effective in the second phase of the read option. Fortunately Florida State did not stop the first phase, which is the hand-off to Tre Mason.

The successful fake punt right toward the end of the half probably won the game for Florida State. Moments later Winston made a 21 yard run. Devora Freeman scored on the next play, trimming the Auburn half-time lead to 21-10. More importantly it gave Winston and the whole Florida State Nation the momentum that was so evident in the second half.

The first half was a joy to watch. Not so much during the second half. Hail to the victors. Florida State was the best team in the nation for 2013, and they proved it January 6, 2014 in the last BCS Championship. The Rose Bowl, what a venue for the last BCS game. A four team play-off will start next year. Auburn and Alabama have a chance to get in the top four. We anxiously wait for the first kick-off in September!

AS FOR AS THE BCS, THIS GAME WAS A PERFECT ENDING TO A IMPERFECT SYSTEM! WAR EAGLE ANYWAY!!!