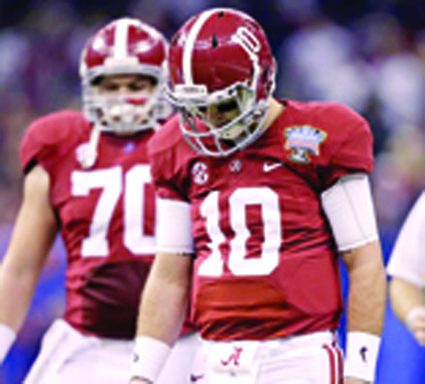 "Oklahoma has a 'pretty good football team', but we will win because we're Alabama". This was the general consensus of the majority of Alabama people heading to New Orleans for the Sugar Bowl this year. That attitude was reflected by the football team and the Alabama coaches as well. Some were concerned being down 31-17 at the half, but Alabama would come back with a vengeance in the second half and pull out the victory in Alabama style...Well it didn't happen! Why?. The rest of this column will be devoted to that answer.

Alabama had beaten a good LSU team and lost to a good Auburn team. That's 1-1 against good teams. So, this was not a great Alabama team, but it was a good Alabama team. Guess what? Alabama was playing a good Oklahoma team in the Sugar Bowl. Everyone overlooked that except the people from Oklahoma. More about that later.

As good as Coach Nick Saban is, he has a flaw in his coaching skills. He is not a good game manager. A. J. McCarron is a good game manager. McCarron is not a great passer. He is not even a good runner. McCarron is a great quarterback. Some people think that a great passer is a good quarterback. Some people think that a great quarterback is a great passer. Not true! A great quarterback is a good football player with a good football mind, the mental and physical toughness to lead his team to it's maximum performance. A. J. has done that for three years and lost only two games. Unfortunately they were the last two games he will play in a Crimson Tide uniform. Many people were upset that McCarron didn't win the Heisman Trophy. The New York Athletic Club is not going to give the Heisman Trophy to a great game manager. They are going to give it to the best football player of the year. I am proud that A. J. McCarron came in second ,even though it was a distant second. Guess who came in second in 1997? Peyton Manning. McCarron is not a great professional prospect according to the experts who make their living evaluating players. He has been projected to be chosen in the third or fourth round. The last two games could hurt him some, but not much. They have studied him for three years.

McCarron did not lose the last two games. He was asked to win them with his passing instead of with his ability to manage the game.

Now, let me discuss the one flaw that I see in Coach Nick Saban's coaching resume. His understanding of offensive football is not the best in the nation, even though, at this point he is considered the best college football coach in the country. His record confirms this consideration. He can hire the best offensive and defensive coordinators in the world. Presently Kirby Smart, Defensive Coordinator is paid more that all but a few head coaches. He is worth it. Doug Nussmeir has been the offensive coordinator for two years. His salary is unknown to me, but I suspect that he is not looking for a higher paying job. During every game I see Saban in Smart's ear all during the game. I guess Nussmeir is in the press box. I never see Saban jawing at anyone but the players when Alabama is on offense.

The Auburn game and the Oklahoma game were prepared for in similar fashion. We will not go into what happened in the Auburn game except to say that two very good teams played and Auburn won. What made Coach Nick Saban and his staff think that the best way to beat Auburn and Oklahoma was to ask A.J. McCarron to throw Alabama to victory. There is always a weakness in every good team. The coach's job is to figure that out and exploit that weakness with the game plan. What would have won both the Auburn game and the Oklahoma game for Alabama?.....A heavy dose of T.J. Yeldon, Kenyan Drake and Derrick Henry. As bad as Auburn's secondary was, their linebackers were the worst in the conference. The game plan should have been-make first downs with the running game and a few throws from McCarron which would have kept Auburn's high powered offense on the bench. That did not happen. Agreed, T. J. and Kenyan have put the ball on the ground a few times. Drake fumbled three times and lost all three for the season. Yeldon dropped five and lost four. Henry has not played enough to be judged. Whatever beef Coach Saban had with Kenyan Drake is probably justified, but it may have cost Alabama two games. Drake is a better running back than Yeldon, and where has Derrick Henry been all year? He looks better than Yeldon or Drake. These three players running behind a very good Alabama line would control the ball against any team in the country. Coach Saban and his offensive staff decided to win both games with McCarron. If you know football, you figure that out!

Now, let's concentrate on the Sugar Bowl. Knowing what has just been explained above let's see what happened with Oklahoma. First of all Oklahoma had a very good football team. Their offense was similar to Auburns but not as complicated. Trevor Knight, the Sooner quarterback was slippery and adept at running the read option as well as the roll out pass. He hurt Alabama with both, taking a 31 -17 lead at the half. Of course Cade Foster missed a field goal just before the half. Why Coach Saban stayed with Foster for three years is a mystery to me. He is never effective in the big games. I'm not blaming Cade Foster. He is just a player trying to do his best. I blame the head coach. Saban has seen him in big games. He just ain't got it! Furthermore he hardly ever kicked off into the end zone for an automatic touchback that would make the opponent start at the 25 yard-line. You go figure that one out.

I have watched Oklahoma all year. I saw them beat Notre Dame, TCU, Texas Tech, Kansas State and Oklahoma State I also saw them get blasted by Texas and Baylor during a time that their quarterback, Trevor Knight was hurt. Still, Oklahoma brought a 10-2 record into the Sugar Bowl having played a tougher schedule than Alabama. Alabama brought an 11-1 record into the game having played an easy schedule with only LSU and Auburn with a chance to beat them. This may have hurt Alabama in the long run but what hurt the most was not taking their strength, the running game, and over powering Oklahoma. Oklahoma had been battle tested in almost every game. The linebackers and secondary are used to being thrown on. That's what they do in the Big Twelve Conference. They throw, throw, and throw. Name me a running back out of the Big Twelve Conference who has distinguished himself with great numbers.

So, why have a game plan that called for more throwing than Alabama has done all year. It makes no sense. If Alabama had pounded Oklahoma with the three backs mentioned above, the Oklahoma offense would have been on the sidelines anxiously waiting to get on the field. That's just a decision that was made in Tuscaloosa that was the wrong decision. Give credit to the Alabama coaching staff for making a change at half-time to go more to the run and bring in big Derrick Henry to carry the load He almost brought Alabama back, but, the game was lost in the first half when the original game plan was followed. Derrick Henry is a true freshman. He is 6-2, 235 1bs. Where has he been?

The "coaches"were concerned about his past blocking skills. That can be easily be solved by getting a new pass blocking coach or just give him the ball and he won't have to worry about pass blocking Alabama was just too good to have the season end like this.

There is an old Chinese proverb that says "To him that gets the glory, the same shall receive the fire in defeat". To be fair to Nick Saban, I thought this was one of his best coaching jobs until the Auburn game. Now, I have to wonder. A 10-2 record is pretty good everywhere except at Alabama. Maybe all the talk of going to Texas was a distraction. Maybe at 63 he is losing some of his go power. Coach Paul Bryant died at the age of 69. Coaching is a young man's game. With a new contract of over $7 million dollars, Saban is expected to do better than 10-2 and lose to Auburn.

I've gotten a little off track. Let's sum up the Sugar Bowl and be done with Alabama football until recruiting season:

Alabama had four turnovers. Yeldon fumbled on the eight yard line going in. That would have been 7 points. McCarron was intercepted twice in the first have that lead to 14 points for Oklahoma. So, add 7 and take away 14, that's 21 and Alabama would have been leading at the half 24-17. That shows you what turnovers do. Instead, Oklahoma was leading 31-17. Alabama actually won the second half after they switched to the running game. Alabama had a 14-7 advantage until the last desperation pass play where McCarron fumbled after being sacked resulting in Oklahoma's last touchdown. So the score of 45-31 was not indicative of how close the game was.

Everyone is aware of Nick Saban's four national championships. Most coaches spend a life-time in coaching and never win won. He calls his method of coaching "The Process". So far it has worked very well. He has also won four SEC titles, which ties him for 6th all-time; Coaches with more are Paul Bryant , Johnny Vaught, Vince Dooley, Steve Spurrier and Bob Neyland.

Nick Saban is in a class of coaches that only comes along in a lifetime. He will be initiating the process once again, and will again be in position to win another championship. Coach, just don't take any more bids to the Sugar Bowl.