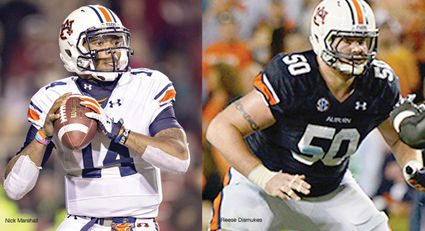 The Auburn road back to the national championship to redeem a lapse of the mind on defense against Florida State last year, became muddy at best just before the SEC Media Days in Birmingham in mid-July. THE LEADER of the Auburn offense was stopped in Georgia for having his windows tinted too dark, which is a traffic violation in Alabama and Georgia. Before completion of a warning ticket, the alert police officer smelled something "funny". It wasn't so funny to Nick Marshall, the Heisman Trophy hopeful quarterback for the Auburn Tigers. Shazam! The undeniable leader of the Auburn offense was found to have 1/2 ounce of marajuana in his possession. How did that get there? You know that the team leader would not risk the entire season for himself and his Auburn teammates over a little "weed". Oh, yes he would! Oh, yes he did!

Coach Gus Malzahn took a chance on a junior college quarterback who had been dismissed from the Georgia Bulldogs for activities that indicated that he may have a flaw in character. 'Malzahn the Magician' took this character in August of 2013 and turned him into the starting quarterback in three weeks. He also turned him into a model citizen admired by all Auburn people. Malzahn took Marshall's shaky past and turned Marshall into the future of Auburn football.

Coach Malzahn did the only thing that he could do with only a few days notice. He struck Marshall's name from the players he would take to Media Days. He was replaced by senior tight end C. J. Uzomah, who represented Auburn in a way that all Auburn people would be proud of. So, the first step in Nick Marshall's campaign for the Heisman was to be banned, deservedly so, from SEC Media Days. How does that look to the people who decide on the Heisman? They are definitely not looking for a dope smoking trouble maker. What other punishment Coach Malzahn has in store for Marshall may never be known. There will be more punishment. Malzahn's sudden rise to the top of the college football world was built on attention to detail and disciplined players.

Prior to this selfish and self centered action by Nick Marshall, I had predicted that if he had as good a season as last year, he would be a candidate for the Heisman no matter what Auburn's record was. I must retract that prediction. How many times can a person be rehabilitated? It depends on the person and the rehabilitator. Marshall must have a year better than last year, and he must lead the Tigers to the four team play-off if he is to be mentioned in Heisman Trophy discussion. I like him. I hope he has a fantastic year. I hope that he has learned more than this; if you gonna' smoke dope in your car, don't have anything wrong with you car!

The key to Auburn's season is the performance in a leadership role of Nick Marshall and the ability of center Reese Dismukes to get the offensive line into the right blocking schemes before the snap of the ball. That is difficult as fast as Auburn runs their offense. The offensive line is solid. There should be little drop off despite losing the best offensive lineman in American, left tackle Greg Robinson to the NFL. Despite losing Tre Mason early to the NFL, Auburn is deep in running backs with more speed than Mason. The wide receivers are the best in years.

Now, for the defense. It was bad enough to get Auburn into the national championship game last year. Coach Ellis Johnson has better players this year with more depth at each position. Johnson got away with having no linebackers last year. He has about three this year. That is good. The secondary will be better even though losing Chris Davis to the NFL will hurt. The defensive front is much better. The kicking game is again solid.

How will the Tigers take on the 2nd toughest schedule in the country? Here is the way I see it in August...

AUGUST 30 - The Razorbacks from Arkansas will try to root up Pat Dye Field with a heavy ground game. Coach Bret Bielema likes to outmuscle everybody like he did at Wisconsin. It didn't work so well last year. He suffered through a 3-9 season. They may "beat on" Auburn for a half, but they can't match the speed of the Tigers.

SEPTEMBER 6 - The San Jose State Spartans come to the Plains with no chance to win but will go home with a good paycheck.

SEPTEMBER 13 - Auburn has an open date and should have two wins under its belt. This is a great time for a break. Depending on how the first two games go, Malzahn can make any change he may deem necessary to take on the meat of the schedule.

SEPTEMBER 18 - Auburn goes on the road for the first time to Manhattan, Kansas. Coach Bill Snyder will have his Kansas State Wildcats ready to claw the blood out of the Tigers. They have some weapons and could give Auburn a tough go of it. It's a Thursday night nationally televised game. That usually favors the home team. Thursday presents an unnatural travel schedule. Auburn is better but, watch out! Bill Snyder is a solid football coach.

SEPTEMBER 27 - Louisiana Tech will come through Mississippi for Auburn's homecoming game, but they won't go through the Tigers as easily. They can score, but it will be a happy homecoming. Auburn should be 4-0 by sunset.

OCTOBER 4 - LSU at Auburn is better than LSU in Baton Rough, but not much. If Auburn can pick up where they left off in the fourth quarter of last year's game, Auburn can win this one. LSU will be favored and they should be. One group of Tigers will be happy. I just don't know which one. Had you rather have Guz Malzahn coaching your team or Les Miles?

OCTOBER 11 - Auburn's second road trip is to Stark-Vegas, Mississippi. Coach Dan Mullens has his best team waiting for the Tigers. He will remember having Auburn defeated last year except for a last minute clutch pass from Nick Marshall to C. J. Uzumah with seconds left on the clock. That's when Marshall became a quarterback. Whether the Bulldogs win or not, they will beat you up. Auburn will be a slight favorite, but after LSU, this could be a trap game.

OCTOBER 18 - Another great time in the season for an open date... Auburn needs to heal from LSU and Mississippi State. With some injury luck, Auburn will be facing a gaunlet of games the rest of the season with enough players to make a play for a top bowl game, if they miss out on the SEC play-off.

OCTOBER 25 - South Carolina comes to the Plains with a full load of cannon balls. Steve Spurrier is a great game coach. If this game was in Columbia, I would definitely pick the Gamecocks. But it is in Jordan-Hare Stadium and that gives the Tigers a chance to win. The defense will have to stand tall in this one. Spurrier will have a good offensive plan. It's a toss-up in August.

NOVEMBER 1 - Oxford, Mississippi is the site of Auburn's third road show. Ole Miss could have only one loss by the time the Tigers arrive. They could even be undefeated as so many experts have predicted. Coach Hugh Freeze has had two excellent recruiting years and a lot is expected out of the Rebels this year. After 7-6 and 8-5 seasons, I am prepared to give Ole Miss a 9-4 season in 2014. Freeze and Malzahn are very good friends. Unless Auburn is badly beaten up, I don't see Freeze beating Malzahn any time soon.

NOVEMBER 15 - Auburn people everywhere will have Georgia on their minds. This shapes up to be one of the best games of the year. It could also determine who plays in the SEC championship. Georgia is loaded, offensively and defensively. They have great skills at running back. They have a quarterback named Hutson Mason. Mason has been sitting behind Aaron Murray for three years. He had a great spring. The 6-3, 205 lb. senior is ready to prove that he is better than Murray. Georgia should win, Auburn could win.

NOVEMBER 29 - When Auburn arrives in Tuscaloosa, I fully expect Alabama to be 11-0. Auburn should be in that neighborhood as well. This will determine the SEC championship just as last year. Auburn may not be in it, but they can say who is. Malzahn's Tigers can score on anyone. But, can they keep Kansas State, LSU, Mississippi State, South Carolina, Old Miss, Texas A&M, Georgia and Alabama from scoring more?

If Auburn is to duplicate last year's success and play for a championship, they must have schedule luck and injury luck. I don't see Auburn going through this schedule unscathed. But, I picked them 8-4 last year. That's how much I know!