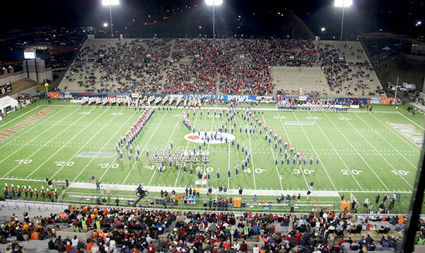 The proliferation of bowl games has been a favorite of mine. There are too many and next year there may even be more. The NCAA sanctions every bowl game played. ESPN will televise any bowl game within a thousand miles of the Continental United States. Why? ESPN makes money. The NCAA makes money. The participating schools make money for themselves, and for their affiliated conference. The independent teams like Notre Dame and Brigham Young really make money. The professional gamblers in Las Vegas and other book making locations make money. The advertisers evidently make money or they would not sponsor the games. So, with all of these people making money, why not add to the number of bowls that were played this year?

What can be done about this problem? This writer is establishing a new website to combat the NCAA, www.cutbowls.com...you can fight this also. If the NCAA does not sanction a bowl game, it will not be played. ESPN and other networks can not televise a game that does not exist.

The bowl season that has just ended was the worst. There were thirty-eight bowls played using up 1,560 hours of television time. That is almost 67 days. That does not include the national championship game at "Jerry's World". With 38 bowls, there obviously has to be 76 teams participating. There are 128 Division I football playing schools being quasi-officially governed by the rules and regulations of the NCAA. Every school in the FBS (D-1 classification...the Auburns, the Alabamas, the Ohio States, the Wisconsins, etc.) that played in a bowl this year, were all sanctioned by the National Collegiate Athletic Association (NCAA). The fact is that only fifty-two schools in Division 1 did not go to a bowl, approximately 40%. This obviously means that 60% of all Division 1 schools were in bowls this year.

Picking on the NCAA has always been popular especially here in Alabama where Alabama and Auburn have been hit very hard in the past with serious NCAA probations. Probation usually means that a team can not go to a bowl game during the probationary period. Sometimes, it can mean that a team can not participate in any televised game for this period of time. Also, the number of scholarships in the sport on probation can be seriously reduced. In the 80's, SMU was hit so hard that the program had to be discontinued. That is what has been referred to as "the death penalty".

The most egregious mis-use of power by the NCAA occurred in the Penn State affair three years ago. Mark Emmert, president of the NCAA saw a chance to make a name for himself and the NCAA by being on the "right side" of the sex scandal that occurred while "squeaky clean" Coach Joe Paterno was in charge of the football program. The former assistant coach that perpetrated the illegal sex acts on young boys in and around the facilities governed by Coach Paterno, the Penn State athletic director and the Penn State University president was a "hero" to the Penn State program and its fans. Coach Jerry Sandusky was the long time defensive coordinator who helped Paterno win two national championships. I believe that "Joe Pa" knew something long before the story broke because he terminated Sandusky, who quietly rode off into the sunset, but kept coming back to the shower room at the football facility. This was clearly a criminal case and not a NCAA probationary case. The only thing that the NCAA could authoritatively do to punish Penn State was with the regulation regarding "lack of institutional control". Emmert realized later that he had over-stepped his boundaries in this case. The NCAA allowed Penn State to participate in a bowl game this year. All sanctions will be lifted as of this fall. The NCAA has over-stepped its bounds in many cases and has done little or nothing in others.

Picking on ESPN is something new for me. It only occurred to me this year that this sports network would televise "THE TEXAS COW PATTY BOWL" in Amarillo, Texas. It is all about the money. Unfortunately that's the world we live in. Does it make this right? No. Does this make it wrong? No. It's just business. The bowls to a football fan is like the liquor stores are to an alcoholic. How many liquor stores do we need in America? I don't know the answer to that question. We must have enough because there are plenty of drunks causing havoc in their own families, and causing the deaths of innocent people on the streets and highways of this country.

Now, the bowls are not killing people, or causing undue hardship on families of football fans, but they are causing people to spend less time with their families during the holiday season. The ultimate fan may be with his family physically, but he could be like me. The obsession to watch football is so strong with some fans that it will actually cause them to skip dinner with the family in order to watch Utah State play the University of Texas at El Paso (UTEP) in the Gildan New Mexico Bowl. I'm not sure what a "gildan" is. Maybe I don't need to know. It hasn't hurt me so far not to know.

This bowl game addiction is growing like an infectious disease. In 1990 there were 19 bowl games. In 2000 there were 25. Last year there were 34. This year, 38. The number of bowl games have actually doubled since 1990. Where is the saturation point? I think that we arrived at it this year. I probably watched some or part of 35 bowls this year. My obsession may be a little stronger than most, but it will not be by much. I'm bowled over, bowled out and bowled under. This madness has to be put in reverse. The NCAA only requires that a team have at least six wins to be "bowl eligible". Fresno State played Rice in the Hawaii Bowl with a 6-7 record, the only team with a losing record in the lineup this year. Now they are 6-8 because Rice ate their pineapples.

What is the solution? May I offer an opinion? I saw hardly 2,000 people in the stands at the Hawaii Bowl. That was the least attended bowl game of the year. In others, the stands were less than half filled. Even the inaugural Camellia Bowl in Montgomery had an attendance of around 20,000, approximately 80% of capacity. It is not my intention to say that we never need a new bowl game. The Camellia Bowl for instance was a resounding success. My intention is to say that we must cut out some games that are really embarrassing for the participants, the local bowl committee. It should be embarrassing to the NCAA.

The NCAA can require the teams in its organization to have six wins in order to be eligible for a bowl game. I believe that they should institute a rule that the participating teams, fans, local residents and the bowl committees must sell at least 90% of the tickets, with at least 80% of capacity in attendance. After two consecutive years not meeting this requirement the NCAA will no longer sanction that bowl game. This would allow the "bad" bowl games to "expire" over time due to their own poor performance. This should start this year. Now, there may be some legal issues with the NCAA trying to enforce a regulation on an organization like the Camellia Bowl for example. This bowl is like all others. It is basically a privately owned organization in conjunction with the City of Montgomery. The Camellia Bowl committee picked a perfect day for a minor bowl game this year; December 20, the Saturday after the Army/Navy game. Kudos to the Camellia Bowl Committee. To accomplish anything as complicated as I am proposing, we will need an ace in the hole. One always needs an ace in the hole. Gotcha' covered cowboy. We have five aces in the hole, ESPN, ABC, NBC, CBS and FOX Sports. These are the people we have to convince to play ball with the NCAA. The NCAA would never be bold enough to take on the bowl system without somebody really tough backing them up. ABC, NBC, CBS, are not, and will not be a problem. These are networks that are extremely concerned about the quality of their programming. They would not telecast the "Cow Paddy Bowl". Fox Sports is not a big player in the bowl games. ESPN on the other hand is where the problem began, and where the problem exits today, and where the problem will be in the future. Don't get me wrong, I love ESPN. I remember laughing with my friend Jim Fyffe about the fact that we needed to hurry home so that we could catch the soccer match between Brazil and Mexico on ESPN. That was the best that ESPN had to offer in the beginning. Now if they telecast a football game, I will likely watch it with interest.

What needs to happen is that enough people with enough influence put enough pressure on the NCAA to seek an agreement with ESPN. The agreement that is necessary is that certain restrictions be placed on all bowl games in existence today, and all bowl games that will seek sanctioning in the future. It is not a factor in the business interests of ESPN as to whether the attendance at the games are good or bad. If they can "sell the game", their money is in the bank. However, the NCAA and college football should be embarrassed by lack of local participation in the games and the lack of interest of the fan bases of the participating schools. In the "good ole days", in order to receive an invitation to a bowl game, a school had to have a very good football team, but more importantly, they had to have a great fan base that would buy tickets and spend money for a week in the host city. ESPN could care less about the quality of the team or the draw that the team will bring to the host city. They will know before anybody whether that game can be sold. It's just a business deal to them. If the bottom line looks good, the product can be had.

The only teams with "six win seasons" that were not in a bowl game this year were Old Dominion, Temple, Middle Tennessee, Ohio U, and UAB. That is insane. From Fresno State (6-7) versus Rice (7-5) in the Gildan Bowl to the semi-finals of the first national championship tournament in history. What a trip; Sixty-seven days?

Finally it is over. Ohio State won the first four team play-off by beating Oregon 42-20. Now we can start talking recruiting!