Small Game Are A Great Way To Keep Everyone Active In The Outdoors, Regardless Of Age. 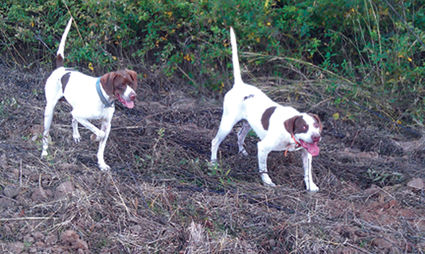 Ladies and gents, the end of deer season is nigh upon us. We're in the home stretch of what's been an up and down season, with weather changing nearly every day. I've seen just about every season of weather Alabama's got in the past couple of months, and let me tell you, we've had a feast or famine hunting season to go with it. But don't you worry about the end of deer season, for our friends in the northern zone. While the rest of us lucky sons of guns in the southern zone get our 10 day extension at the start of February, you fine folks get to keep going with small game season! If knocking down some of that honey-do list isn't occupying all of your time, it's a great way to stay out of the house and in the woods!

It may not have the same allure as deer hunting, but small game are a great way to keep everyone active in the outdoors, regardless of age. With its low-cost entry point and simplicity, you can count on some good times with everyone while chasing after rabbit, squirrel, possum, and raccoon. Through February 28th, we can hunt those varmints all across the state with a standard hunting license.

As always, the rules are 8 a day, 8 in possession for rabbit, squirrel, and opossum. For raccoons, on privately owned or leased land, there's a 5 per person limit, while there's a 5 per group rule for open permit – public land. Of course, for rabbit, possum, and raccoons, you can run dogs, but not during the daytime or after 3 AM in areas of spring turkey season. A simple .410 or .22 can do the job nicely without gashing your bank account too deeply.

Shoot, while you're out there, you can take shots at crows, blackbirds, beavers, groundhogs, and nutria without a bag limit, during daylight hours. As long as you practice your basic hunter safety, there's still plenty do without having to chase after deer. For the more adventurous types, you can even cook the game you hunt down. I hear you can make a mean meal out of squirrel!

And I've talked about it many times before, but hog hunting is a year-round venture, and there's never a bad time to get after those pigs. You better believe they won't take a break from rooting up your plots, trashing your roads, and generally making a great nuisance of themselves. I say let's not give them a break either!

If you're like me, you'll take any reason you can get to get out into the woods, and it doesn't just stop with small game either. After February ends, I'll probably be out there, working around and trying to set myself up for turkey season, my favorite season of them all. There's plenty of stands to take down and move, feeders to fill, and land to walk, so don't be shy about getting those boots worn in.

I know I'm a broken record, but take any chance you can get to get outside and active in the outdoors. For folks like me, it's therapy all on its own; home away from home. There's plenty left to be done, and though we're at the end of one season, there's plenty more reason to stay out there. Be safe, and go get'em!