Names To Remember In February, 2015

On Sunday, February 1, 2015, the last vestige of the glory days of Sidney Lanier High School came to an end. Legendary basketball coach Bill Joiner fittingly passed away as the half-time of the Super Bowl began at the age of 83. What a fitting way for him to go. As the coach in the pressbox for Coach Bobby Wilson's great football teams of the same era, Bill would scramble down the stadium steps as fast as his old bad knee would allow in order to give Bobby and the rest of the Lanier coaching staff a clear, concise report on what he had seen in the first half. He usually had another coach with him because he was so busy relaying the offensive plays down to Coach Wilson that he did not have time to make a lot of notes. Coach Joiner would point out what was working in the first half and what was not working. Then he would make a recommendation to Coach Wilson as to how he should conduct the second half. His recommendations were not always followed to the letter because Bobby Wilson was just as stubborn as was Bill Joiner. For the most part Coach Wilson would follow Coach Joiner's scouting report.

This process must have been very good. Lanier won the first three state play-offs initiated by the Alabama High School Athletic Association, 1966, '67, and '68. Coach Joiner would later become the head football coach for five successful seasons starting in 1969. But, Coach Joiner's football coaching is not why the Gazette is publishing this story.

What happened between championships in 1949 and 1962? Bill Joiner was signed to a football scholarship to Ole Miss by the great Johnny Vault. Coach Vault would ultimately win a national championship for the Ole Miss Rebels. After his freshman season, Bill was not as interested in football as he was his beautiful girl friend, Joyce Jones. So, he gave up a great chance to become a famous football player and came home to Montgomery to marry that pretty gal. He also missed his family and friends. Think about it...Oxford, Mississippi was a thousand miles away in 1949. Nevertheless, Bill Joiner came home and made plans to make Joyce his lifetime partner. This he did. To Bill that was a bigger accomplishment than being a star football player.

Time passed...a well known businessman in Montgomery named Ernest O'Connor owned part of the Montgomery Rebels baseball team, and had known Bill Joiner for a long time. Bill had actually played for O'Connor on his GAELS baseball team. O'Connor helped a lot of boys back in the day. He was especially fond of Bill because of his talent and because of his demeanor. What many don't know is that Joiner was one of the best all-round athletes in Lanier history...Football season was approaching in the summer of 1950. Ernest O'Connor called the football coach at Troy who was also the athletic director. This is what he said, "Coach, I got a boy here in Montgomery that can make yo're football team, yo're basketball team and yo're baseball team. Do you want him? Sight unseen, name unknown, Bill Joiner had a scholarship to play football at Troy, just forty-five miles from Montgomery. O'Connor called Bill on the phone and told him to "have his bags packed and be sittin' on the front steps at six o'clock in the mornin'. You are going to Troy on a football scholarship." Bill usually did what Ernest O'Connor said. He lettered at Troy, three years in football and one year in basketball. He coached several years in Florida before getting the job he wanted, head basketball coach at Sidney Lanier.

When Bill had saved up enough money through his stamp and bubble gum machines, and what he could put away from his coaching salary, he looked for a business opportunity. Pal Shoemake, a civilian employee at Maxwell Air Force Base and Bill's brother-in-law, John Wright, a retired Air Force Colonel opened a door. They started talking about a retail sporting goods store. Thus, Olympia Sporting Goods was formed. At the zenith of that business there were five locations around Alabama and a large staff on the road selling Olympia in the summer of 2014, Bill's health gradually deteriorated. After several hospitalizations in 2014 and in January of 2015, pneumonia ended the life of a wonderful father, a successful businessman and the best basketball coach in the history of Alabama high school basketball. His friend, Coach Jack Powell from Eufaula might argue that point.

What legacy did Coach Bill Joiner leave? Four state basketball championships from 1962 - '67, a record in nine seasons at Lanier of 235 wins - 43 losses. The Lanier Gymnasium bears his name. The trophy case at Lanier is filled with Coach Joiner's work. As a football coach, he developed kids into men for five years making the play-offs in 1972. One of his boys is Johnny Davis, the best fullback to ever play at Lanier, the best fullback to ever play at Alabama and an NFL fullback for eleven years. Johnny also owns a Super Bowl ring because of his efforts as the fullback for the San Francisco 49'ers. Johnny knows how much he owes to Coach Bill Joiner. At the funeral Thursday, February 4, a sweet message was on display from Johnny Davis. This writer was at the Joiner residence on Tuesday night, February 2 when Coach Winfrey "Wimp" Sanderson of Alabama called to express his regrets to the family. For all the honors, all the trophies and all the wins credited to Coach Bill Joiner, the real tribute to him are the people that he influenced in some way. They were not always players or coaches, but people that came to know him down through the years. Many people were just too far away to make it to the funeral. So, we will end this story with a list of ordinary people who have accomplished extraordinary achievements, at least in part, through something that they learned from having known Bill Joiner, the man. There is no need to explain what they have done. Suffice it to say they are at the top of the food chain in our walk on this road to happy destiny. As they filed by to pay their last respects, it occurred to me that this is a parade of champions. The coach would have been proud: Coach Steve Savarese, Coach Alvin Briggs, Pete Farrior, Coach Floyd Mathews, Jimmy Speigner, Coach Dan Washburn, Huston Waters, Dr. Lewis Gayden, Coach Ken Blankenship, Coach Charles Lee, Rodney Burgess, Phillip Young, Charles Jinwright, Mike Haigler, Buddy Hardwick, Buddy Morgan, Meade Guy, Coach Craig McKissick, Mary George Jester, Coach Dan Lewis, Coach John Tatum, Coach Mike Turk, Coach Bobby Spaett, George Thomas, Ben McDavid, Jackie Bushman, Coach Doug Barfield, George Germanos, Richard Fulmer, Billy Moseley, Judge Randy Thomas, Coach Slade Rhodes, Charles Savage, Coach Bubba Lewis, James Anderson, Coach Ellie McKissick, Don Clark, Steve Shiflett, Coach George "Snoozy" Jones, Coach George Harrison, Pete Pummer, Bill Schaum, Paul Brantley, Ashby Cook, Jack Fowler, Coach Randy Ragsdale, Coach Clayton Bush, Charles Moody, Johnny Robertson, Bobby Norman, Mickey Griffin, Jeff Blitz, Coach Larry Chapman, Coach Terry Posey, Coach John Bricken...

For the fifth straight year, Nick Saban has captured the number one recruiting class in the country. He has done it six times in the last eight years. How does he do it? What does it really mean for the future of Alabama football? These are the questions many people are asking. Nobody has ever dominated the national scene as much as Saban's Alabama team in the last seven years: Three national championships, six top five finishes, qualifying to play in the first NCAA National Championship four team play-off, dozens of Alabama players being drafted in the first and second rounds of the NFL draft, being named "Coach of the Year" multiple times and generally considered the number one college football coach in American.

Coach Nick Saban has several things going for him before he ever initiates his recruiting plan:

1. Alabama is the most nationally known football power in the South.

2. This has been the case since Alabama first won the Rose Bowl in 1926.

3. Alabama has been to the Rose Bowl four times, the last in 1946 before the Rose Bowl entered into a permanent agreement with the Big Ten and PAC 12. Otherwise, Alabama would have been invited more.

4. The winner of the Rose Bowl was generally considered the national champion because they tried to invite the best two teams in the nation.

5. Until Alabama was forced to forfeit many of Coach Stalling's wins, Alabama was third in wins in the country behind only Michigan and Notre Dame.

6. Alabama has more alumni groups in more cities than any other team in the country. This does not hurt the recruiting effort.

7. Alabama has been a successful draw for the radio and TV industry since the 1952 Orange Bowl where they defeated Syracuse 61-6.

These first reasons have nothing to do with Nick Saban. They are built in values available to who ever is the coach at Alabama.

8. Nick Saban has a good plan for recruiting. He wants to dominate a geographical area that circles Tuscaloosa in 500 mile radius.

10. Nick Saban is a very intelligent person. He can fit into any circumstance. He can be rough and even rude to the media and they love it. He can be gracious and entertaining in speaking engagements. He came to Alabama with the understanding that he would only do seventeen speeches each year. If he can not tie each speaking engagement with recruiting, he generally will not accept it.

11. Nick Saban is a "humble" fatherly figure when he goes to a prospects home. He can fit in any situation.

12. Nick Saban is a handsome, charming man to the mothers of the prospects he visits.

13. Nick Saban is a strong disciplianrian figure to the father of the prospects he visits, assuring them that he will do whatever it takes to help their son get his degree.

14. Nick Saban assures the family that their prospect will have a good chance to play in the NFL if he applies himself in the process that Saban preaches about constantly.

15. The Alabama facilities are second to none, which is a big selling point to a recruit and his family.

16. Saban is passionate and relentless in pursuit of the top players in the country. He will outwork his competition in almost every case.

17. Nick Saban is a great salesman when he is selling Alabama football. 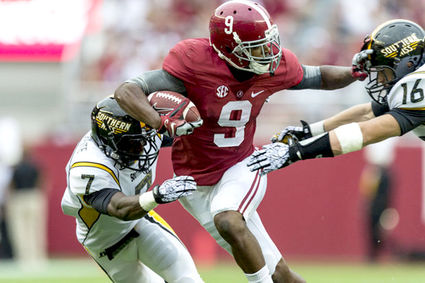 This should be enough to convince our readers of the reason for Nick Saban's success as a recruiter at Alabama.

The consensus of rating services had USC a close second, Florida State third and a surprising fourth place for Tennessee. Coach Butch Davis is making noise. Auburn finished strong to place in the top ten for the fifth straight year Other top ten finishers were UCLA, Ohio State, LSU, Georgia and Clemson, not necessarily in that order. This rating system is not scientific, but can be counted on to be accurate enough for discussion for the next twelve months. Other schools argue every year that the recruiting rankings are not accurate, but Coach Nick Saban's record for the last seven years is 84-11. It must mean something!