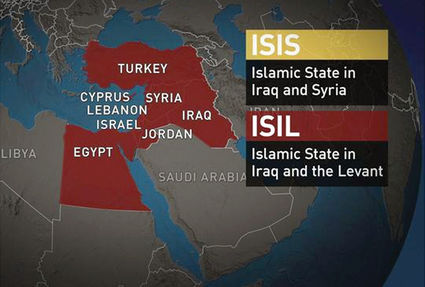 (Photo: NEWS CENTER) Government officials use ISIL, which refers to the Levant region.

Levant - [the region of] Syria, Sham, and the Eastern Mediterranean. Historically, the region was known by a variety of names, of which the first recorded to apply to the whole region was Canaan. The Levant is a geographical term that refers to a large area in Southwest Asia, south of the Taurus Mountains, bounded by the Mediterranean Sea in the west, the Arabian Desert in the south, and Mesopotamia in the east. It stretches 400 miles north to south from the Taurus Mountains to the Sinai desert, and 70 to 100 miles east to west between the sea and the Arabian desert.[1] The term is also sometimes used to refer to modern events or states in the region immediately bordering the eastern Mediterranean Sea: Cyprus, Palestine, Jordan, Lebanon, and Syria.

Over the past several months, I have become increasingly embarrassed, and to be quite honest, ashamed of the majority of people running this great country of ours, Democrat and Republican. With every passing day, another item makes its way to the forefront of the news to further anger and disillusion most of us who pay attention to what is going on in the world around us. With that in mind, here is a not-so-complete list of some items that bug me right now.

– I am ashamed that our current administration allowed the release of details of an upcoming potential operation to recapture the Iraqi city of Mosul. Really, guys? In violation of at least three principles of war as clearly stated in our own Joint Doctrine and Sun Tzu's Art of War, there is no excuse for this shameful violation of standard rules of conducting war. Heads should roll.

– I am ashamed of the administrations continued use of the term ISIL as opposed to ISIS. The difference may be subtle but it is there nonetheless. Look it up. One has to do with a region void of Israel. Guess which?

– I am ashamed that the State Department Deputy Spokesperson, Marie Harf, actually believes the way to defeat the enemy is a robust jobs program in their home countries. While the entire world laughs at her ignorance, she doubled down on her stupidity by announcing that her ideas, albeit contrary to thousands of years of proven military doctrine, are "too nuanced" for the rest of us to understand. I suggest she take a couple of folding tables over to Mosul, set up shop for a job fair and let's see what happens. For what it is worth, the first commander of Strategic Air Command and the architect of the bombing of Japan in WWII, Curtis LeMay said, "If you kill enough of them, they will stop fighting." Gonna have to agree with him.

– I am ashamed that we have an administration that refuses to identify Christian and Jewish victims of Islamic violence but happily mentions the Crusades and even the deaths of the "Muslim" three college students in Chapel Hill, N.C. Identify the victims as they are. Yes the 21 Coptic Christians were "Egyptian Citizens" as described by the administration, but they were first and foremost, Christian, and according to their captors, they were killed for that reason alone.

– I am ashamed that after the death of Army Maj. Gen. Harold "Harry" Greene in August of 2014, the White House did not send any officials to his funeral (Yes Defense Secretary Chuck Hagel attended but that was his frappin' job) yet they did send three officials to the funeral of Michael Brown in Ferguson, MO. For what it is worth, no White House officials were sent to former British PM Margaret Thatcher's funeral either. Hmm.

– I am ashamed that we have an administration that believes it is acceptable to tell our enemy what we will and will not do on the field of combat. To tell them point blank that we will NOT send in ground troops is to tell them there are now a countless range of options that they do not have to contend with or worry about. Sun Tzu 101 again. Never tell the enemy what you are going to do unless there is a good strategic or operational reason for doing so.

– I am ashamed that after the "Arab Spring" and other uprisings in the region, we still have no clearly defined, measurable and attainable political objectives (thus, our military objectives become questionable). The press continually harps on strategies but as I have written before, those are totally useless without being tied to viable objectives. Let's have a national dialogue on our strategic objectives. Then we can talk about operational and tactical objectives and then the strategies to coincide with them.

– I am ashamed that after reading the most recently released National Security Strategy that, well, uh, read it for yourself. Be sure to have a vomit bag close by. Do these guys, uh, just read it. Be sure to have a lot of "Strategic Patience" though.

– I am ashamed that a large percentage of American students in some of our more prestigious institutions of higher learning actually believe that the United States is the biggest threat to world peace; even more so than ISIS. Wha-what???

– I am ashamed that the Seattle Seahawks lost to the New England Patriots. Okay, not really.

– I am ashamed that during time of war, our administration released five enemy Taliban leaders. These men were the equivalent of the Nazis Wilhelm Keitel, Wilhelm Frick, Arthur Seyss-Inquart, Alfred Jodl, Ernest Kaltenbrunner who was each tried at Nuremberg. Not only did we release these five men, we released them for a known deserter and likely paid money as well. By the way, 9 months after his release the administration has still yet to release the findings of their investigation. Transparency? Right.

– I am ashamed that we have politicians, ON BOTH SIDES OF THE AISLE, who think that our national debt of $18,000,000,000,000 and growing is not worthy of correction. None of these so-called men and women are willing to step up to the plate and do what is necessary to reverse this trend. After a year where the United States took in record tax revenue, over $3 trillion, yet we still came up $500 billion short. Criminal. BTW, our most recent budget has called for $3.99 trillion in spending for the fiscal year beginning Oct. 1. It also estimated that tax revenue would top $3.53 trillion, resulting in another $474 billion deficit, albeit the lowest since 2008.

– I am ashamed that our new Secretary of Defense, Ashton Carter, has decided that his first real action worthy of his new job is NOT to outline, define and articulate clear tactical, operational and strategic objectives and strategies for dealing with ISIS, but rather to push forward with allowing transgender people to serve in the military. Really? Right out of the chute, so to speak? This is like having your baby playing in the middle of the freeway. The most important thing is to get your baby out of the road. Period! Instead you are worrying about what he had for breakfast that morning. Yeah, his breakfast of maple syrup covered M&Ms and cat food may be an important issue that needs to be addressed and dealt with appropriately but most importantly, you have to deal with the immediate and more dangerous threat first. Again, the issue here is not transgender service but the administration's overall strategic focus and the ability to prioritize and effectively deal with identifiable threats.

Folks, the list goes on and on. Although I believe this still to be the greatest country on Earth and I would rather live nowhere else, we have to get our collective act together in order to reverse some of this craziness within our midst. I am sure some of these issues likely bother you as well. "Get me outta here, Percy!"