On July 16, 2014 under the leadership of the US Department of Treasury Secretary, Jacob J. Lew, in an apparent response to Russia's attempts to destabilize the eastern Ukraine as well as its advances in and occupation of the Crimea, broad-based sanctions were levied against Vladmir Putin's government. These sanctions targeted financial services, the energy sector, select areas of the Russian arms industry and identified institutions directly related to the undermining of the Ukrainian government or the "misappropriation" of Ukrainian property.

Executive Order (E.O.) 13662 specifically imposed sanctions or targeted US persons from providing new financing to the Russian financial institutions of Gazprombank OAO and VEB and two energy firms OAO Novatek and Rosneft. In all, eight arms firms were identified, "Luhansk People's Republic" and the "Donetsk People's Republic" were also targeted. These two entities asserted governmental authority over parts of Ukraine without the authorization of the Ukrainian government and Aleksandr Borodai, a self-declared "prime minister" of the Donetsk People's Republic was identified for "threatening the peace, security, stability, sovereignty and territorial integrity of the Ukraine." Lastly, the Feodosity Enterprises, a key shipping facility in the Crimean peninsula and four key Russian government officials were designated by the Treasury department.

Needless to say, this step by our Treasury Department was aggressive and was intended to build upon previous actions to coerce the Russian government to turn away from actions in Crimea and Ukraine. The intent of going after financial and energy sectors within Russia was supposed to increase economic isolation within that country for those companies that want to have access to American economic power. Because previous sanctions worked about as good as a condom run through a cheese grater, Under Secretary for Terrorism and Financial Intelligence David S. Cohen said, "Because Russia has failed to meet the basic standards of international conduct, we are acting today to open Russia's financial services and energy sectors to sanctions and limit the access of two key Russian banks and two key energy firms to US sources of financing and to impose blocking sanctions against eight arms firms and a set of senior Russian officials."

Although E.O. 13662 did not block or withhold property or interests of the identified banks or energy firms nor prohibited transactions beyond the E.O. (although they can be expanded later), the E.O. did specify that persons within Russia's financial services sector may be hit with sanctions. In a nutshell, the medium and long-term lending window to these banks, greater than 90 days, is shut down. Pretty serious stuff if you are looking to secure investments for your products. But let's just take a quick look at some of these companies identified and part of what they do.

The Treasury Department's approach to arms companies was a bit different and actually blocked the assets of those identified companies. Because of their failure to act according to the previous E.O. 13661, their assets within the US were immediately frozen. These companies are:

Kalishnikov Concern – Producer of military weapons. Can you say, "AK-47?"

As for Russian individuals targeted, these four men were also identified and blocked by the Treasury Department.

Oleg Savelyev – Russian Prime Minister for Russian Affairs. Responsible for the integration of occupied Crimea into the Russian Federation.

Sergei Neverov – Deputy Chairman of the State of Duma of the Russian Federation.

Responsible for initiating legislation to integrate the annexed portions of Ukrainian region of Crimea into the Russian Federation.

Igor Shchegolev – Aide to the President of the Russian Federation.

LEROY JETHRO GIBBS (NCIS): RULE 39 – THERE IS NO SUCH THING AS COINCIDENCE.

At 1031 UTC, on the morning of 17 July 2014, Malaysian Flight 17, a Boeing 777- 200ER, registration 9M-MRD, rolled down the runway at Amsterdam's Schiphol Airport and took off for its scheduled flight to Kuala Lumpur International airport in Malaysia's Capital City.

Now, before anybody goes Democrat on me, I am not saying this accident is President Obama's fault. It isn't. Not even close. That being said, when you look at the E.O. 13662 in detail, and I recommend everyone interested to go to http://www.treasury.gov/press-center/press- releases/Pages/jl2572.aspx and reading it for yourself, you cannot help but look at who was targeted by the Treasury Department and wonder. Things that make you go, "Hmmm." Initial intelligence identified the missile that knocked down Malaysian Fight 17 as a BUK surface-to- air missile. This air defense system was known to be operated by pro-Russian insurgents in the Battle taking place in Shakhtarsk Raion at the time of the shootdown. Oddly enough, the missile that shot down the Boeing 777 was built by the Almaz-Antey company. The same company that showed up on the sanctions list the day before.

If you ask me what I think I will tell you that although I am not blaming anybody for anything, I have to admit it is highly suspect that this airplane was shot down the day after these fairly strong sanctions were levied against Russia. Highly Suspect. Do I think the Russians, Vladmir Putin in particular, would authorize something like this as a show of force? Yes.

They've done it before. Just look at Korean Flight 007 back on 1 September 1983. The Russians clearly understand that they can act ruthlessly and nothing is really going to happen to them. Ever. Do any of you think the UN is ever going to do anything? Only if the Russians adopted a Blue Star of David on their flag.

Putin is a tough guy. Heck, he used to be in charge of the KGB for crying out loud. 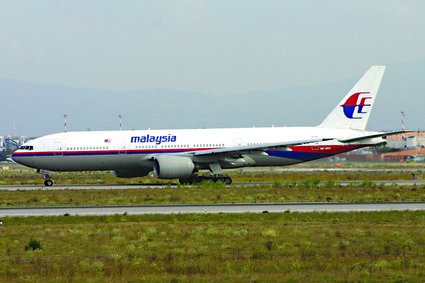 When I think of Putin, I think of the Russians who turned back the Germans in WWII and in my opinion had the most to do with the German defeat by causing over 70% of all German casualties. I admire that toughness. I respect it. And when a guy like Putin comes across a man he clearly has no respect for, why would he not test, in his mind, the lesser man's resolve? I find it disappointing that nowhere in the news media, still to this day, that nobody has put forth the idea that the shoot down was retaliation for or in response to O.E. 13662. If it has, I missed it.

To me it is clear. Out come sanctions against Russia and less than 24 hours later, down falls a flaming B-777 and out pop fingers pointing in all sorts of directions. To me, right now I am going to rest my head on Leroy Jethro Gibbs' Rule 39. There is no such thing as coincidence.