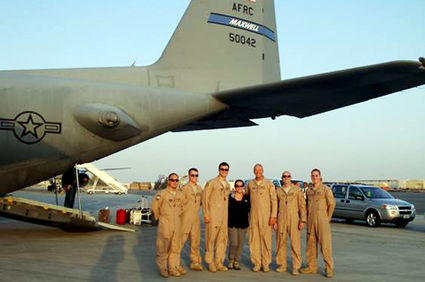 U.S. Representative Martha Roby (R-AL) pictured with members of Maxwell-Gunter's 908th Airlift Wing and their signature C-130 aircraft while the unit was flying missions in support of U. S. operations in Afghanistan.

WASHINGTON, D.C. – Eight C-130 aircraft will remain with the 908th Airlift Wing at Maxwell-Gunter Air Force Base in Montgomery, according to recently released Air Force plans.

The Air Force Report on C-130 Force Structure reinforces a temporary November 2012 decision not to move forward with a plan to transfer the aircraft away from unit. After scrutiny from Rep. Roby and other members of Alabama's Congressional Delegation, the Air Force elected not to transfer the existing aircraft as planned, but instead assigned an additional eighth C-130 to the unit.

The President's Fiscal Year 2013 Budget Request originally called for relocating the aircraft operated by the Maxwell-based 908th Airlift Wing, citing the need for greater efficiencies. Congressional leaders, led by U.S. Representative Martha Roby and including U.S. Senator Richard Shelby, U.S. Senator Jeff Sessions and U.S. Representative Mike Rogers, met directly with the Secretary and Chief of Staff of the Air Force to question the cost saving benefits of the plan, and successfully inserted into the 2015 National Defense Authorization Act a requirement that the Air Force conduct and publish a thorough cost-benefit analysis before moving forward.

That analysis, published as the Air Force Report on C-130 Force Structure, includes the eight Maxwell C-130s as its "most efficient basing alignment" through Fiscal Year 2020. Under the report, the national C-130 fleet will be reduced by an additional 20 aircraft over the next three years.

Rep. Roby, who has been engaged on the C-130 issue since learning of the Air Force's initial plans, said the report confirms some good news for Montgomery and allows those associated with the 908th greater certainty.

"The Air Force's report confirms what we had suspected all along: relocating Maxwell's C-130s didn't meet the Air Force's cost-savings goals," she said. "By requiring the Air Force to conduct and provide an actual cost-benefit analysis, we were able to stop an arbitrary reshuffling of aircraft that would have disrupted the important mission there at Maxwell.

"Our Alabama delegation has been highly engaged on this issue over the past few years, and it is nice to see our teamwork pay off. I appreciate the diligent work of Senators Shelby and Sessions, as well as my colleague here in the House, Rep. Mike Rogers."

The 908th has a stellar record of performance and has been awarded the Air Force's Outstanding Unit seven times.

"The 908th Airlift Wing is an important asset for our country and for Alabama. I'm proud to know the men and women of the 908th and to advocate on their behalf. This unit has flown all over the world in support of our various missions, adding great value to our military efforts. I know because I've flown with them and seen firsthand their professionalism in theater. Alabama is proud to be home to the 908th, and I hope this news from the Air Force provides them and their families greater certainty."

The bill, H.R. 2029, totals $76.6 billion, increasing critical funding for veterans programs and for military construction accounts, while remaining in line with the strict spending restrictions of the House Budget Resolution.

• $33 million for new school construction to repair and replace aging schools at Maxwell Air Force Base;

• $7.6 million for a new Squadron Operations Facility at Dannelly Field.

U.S. Representative Martha Roby (R-AL), who sits on the Appropriations Committee, said funding for these projects was badly needed and overdue.

“I am pleased our Appropriations bill contains funding for these important Alabama-based projects,” Rep. Roby said. “The schools on base at Maxwell and on post at Fort Rucker are in disrepair and badly need replacing. Our military families deserve quality on-base education facilities, and these projects will go a long way toward improving what we offer.

“I’m also glad we can construct a new Squadron Operations Facility for the Alabama Air National Guard out at Dannelly Field. They need the space, and it further enhances our operational assets there.”

On the Veterans Affairs side, the bill:

• Directs funding to modernize the electronic health record system to improve the accuracy and timeliness of treatment; and

Rep. Roby took issue this week with the White House’s threat to veto the bill over what it claimed are “cuts” to veterans spending. Rep. Roby derided such claims as “political gamesmanship” since the bill actually increases spending for the Department of Veterans Affairs by $3.6 billion.

“Only in Washington, D.C., will a $3.6 billion increase on behalf of our veterans be called a ‘cut,’” she said in an impassioned speech from the House floor.

“It’s being called a cut because it’s the only way to shift the blame away from this Administration’s failure to our veterans back to the Republican-led House.

“This is cynical and it is shameful, and I believe that the American people can see straight through it. I hope the President will reconsider this position because there is no place for political gamesmanship when it comes to our military families and our veterans.”

Rep. Roby also worked to include language in the Committee Report instructing key policy reforms to improve medical services offered by VA. The Roby report language calls on VA to:

• Improve access to the Veterans Choice Program by allowing veterans to receive care from private providers if the needed service is not offered by the Veterans administration within a driving distance of 40 miles;

• Continue enhancements of the proven Patient Centered Community Care program, or PC3, which connects veterans with local non-VA providers to cut down on long wait times;

• Report to Congress the tools and resources currently available to the Secretary of Veterans Affairs to intervene at especially-troubled medical centers to improve them.

Rep. Roby said her intention with report language is to lay the groundwork for a major legislative effort that would compel the Secretary of Veterans Affairs to intervene at perpetually failing VA medical centers. The long-troubled Central Alabama Veterans Health Care System was recently reported as having the worst average nationwide for delayed patient appointments.

For further bill details, including a breakdown of the various bill components, visit: http://appropriations.house.gov/news/documentsingle.aspx? DocumentID=394141