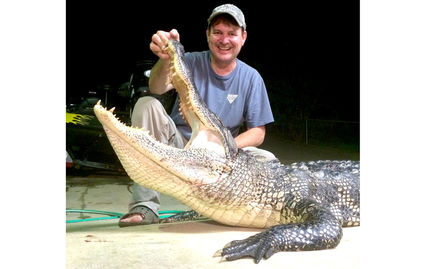 Summer's rolling along, and the weather's been plenty hot! True to Alabama, we can count on plenty of heat and humidity in the coming days, as it's always been. But this year, one thing that will be different is gator hunting.

Now, the alligator hunting permit registration permit began June 2nd, and will run all the way through July 14th. Now, you get to put in for the lottery for permits for each zone at http://outdooralabama.com/registration-instructions, just like always. However, instead of allowing as many entries as you like for $6 each entry, this year you can enter only once per zone for $22 each entry.

Now, that's not too many permits to pick from, with only 260 permits being offered, in total. However, if you don't get lucky this year, try again next year, as the system for choosing who gets a permit involves a preference point system. Meaning, for every consecutive year you apply for a permit, the more likely you are to get a permit.

Hunting times for the zones are 8 PM till 6 AM from August 13th to August 16th, then August 20th to the 23rd in both Southwest and West Central zones. The Southeast zone is 8 PM to 6 AM August 15th until September 7th. Lake Eufaula runs all the way from sunrise on August 14th until sunrise on October 5th, with no restrictions on day or night hunting outside of initial start and final end times.

Now, if you're lucky enough to get that permit, you're gonna have to take a mandatory training course. More info on that can be found at Outdoor Alabama, such as times and locations for the courses given.

Capturing alligators is a bit of tricky business. You can use hand-held snares, snatch hooks on a rod and reel, harpoons with attached line, and bowfishing equipment. No bait is allowed. After you've gotten the gator, you've gotta bring them along the side of the boat, and restrain them with a noose or snare. Once restrained, the gator must be immediately dispatched with a shotgun or bangstick, with appropriate ammo. As always be sure to check out the regulations and requirements on Outdoor Alabama's website.

So, you've landed and dispatched a gator. Next step is the check-in station. Once you've attached your Temporary Alligator Possession Tag, you can move the gator and get it back to your vehicle. Head on over to the pre-designated check station for your zone, and make sure to get there within the proper hours. Once there, the folks will get your permanent tag on the gator. As always, more information is available on the Alabama Outdoors website.

That's the basic gist of gator hunting, and it's an interesting hunting season that's popped up in the Alabama summer. We've made great strides in getting the alligator population back to non-endangered levels, but gators are gators. They're becoming a nuisance to folks on and near the water, so it's time to properly manage the population. With the full support of the outdoors community, we can maintain the balance between proper game populations and our tradition of hunting, and this is just one example of how that balance can be successful on both fronts. So get your applications in, get your boats ready, and go get'em!