"Pressed Between The Pages Of My Mind" 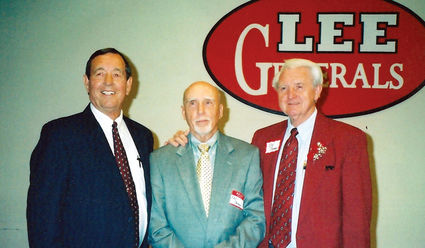 Pat Garner, on the left, was inducted into the Robert E. Lee Hall of Fame in 2006. In 2010 when Ed Jones, far right, was inducted, Pat and his wife Sandy hosted a reception for Ed at their home which was attended by many of their teammates. Eely Jackson, center, from Big Canoe, Georgia celebrated Ed's induction ceremony with Pat. Jackson also played on Lee's first team.

Montgomery and Troy lost a favorite son on the last day of April this year. Coach Pat Garner lost a somewhat short battle with lung cancer and bone cancer. He was 77.

Coach Garner certainly knew how to live. He also knew how to die. His life was so full of activities that he never got bored with daily living. His faith in God was strong enough to carry him through the death of his first wife Jane Marie Helms Garner, (the mother of his five children), a serious heart attack ten years ago, much sickness in his last years, and the last battle of his life, while his wife Sandy provided comfort and care throughout that terrible process.

One night he was working late at his retirement business, Professional Packers, International. He suddenly felt weak and experienced severe chest pains. He was rushed to Jackson Hospital where they discovered that he was having a serious heart attack. In fact, Garner was just a few minutes from death. Without the attention of the staff at Jackson, Pat Garner would have been gone way too soon. "Coach", as most people called him was always resilient. God was always in charge as far as he was concerned, so the heart attack didn't slow him down at all. In fact he took on another job in addition to managing the shipping company. He became a driver for Enterprise Holdings, Inc. for 10 years. He went to the office to get his assignment from Enterprise every day early in the morning. Maybe he had to take a van with three people and drive to Mobile to pick up four sedans. Maybe he had to take a Chrysler sedan to Selma and bring back a van. Coach Garner loved driving for Enterprise. It takes a flexible individual to go to the office each day in good spirits, be sent God knows where, return to Montgomery late in the afternoon with a different vehicle, and be happy when he got home. I know first hand. He got me a job with Enterprise when I retired from the military. I only lasted just two weeks. I guess I just didn't want a job. That was very much like Pat Garner. He really was concerned about me having something meaningful to do when I retired.

You see, Pat Garner was my oldest friend in Montgomery. When we moved to Montgomery from Camden, Alabama in 1945, World War II was still going on in the Pacific. I was just a shy little country boy who was really afraid to go to this fancy city school, Capitol Heights Elementary. I would be entering the second grade. We lived on Vonora Avenue, only two blocks from Cramton Bowl. Pat and his brother Earl lived much closer to the school on St. Charles Street. That was a grade above Vonora.

On the first day of the second grade I reluctantly met Pat Garner, Joe McDade, John Hixon, Johnny Andrews, Wendell Connor and Bill Shepard. All but Andrews and Garner are still alive today. We were to become good friends, but Pat Garner had a way of making me feel good in addition to being a funny guy. We had spend the night parties in those days. There was very little to do in Montgomery in those years except go to Cramton Bowl to watch a football game. It didn't matter if it was Lanier, Loretta, Starke or the "biggie" the Blue/Gray Game. Since my house on Vonora was only a block from Cramton Bowl, Pat and the gang would meet at my house and we would jump over the fence in what was center field, then drop and run for cover. Getting in free was just as much fun as watching the ball game. So, Pat Garner became one of my best buddies when we were seven years old. That friendship lasted seventy years. Every year we got even closer. After reading the next paragraph you will see that Pat was always involved in something.

Pat and I were on the first Robert E. Lee football team in 1955. We graduated together in Lee's first graduating class in 1956. He attended Troy State College where he earned a Bachelor of Science Degree in Education in 1960 and earned his varsity letter in track and golf. In 1973, he earned a Masters Degree in education, also from Troy State College. Coach Garner began his professional career in Montgomery as a teacher and coach at his alma mater, Lee High School as assistant basketball coach to the legendary Leon Ford. His golf teams won the state championship three years in a row. In 1964, he transferred to Floyd Junior High School where he served as Community Center Director; coach of football, basketball, track, golf, tennis, and swimming teams. His Falcons football team won a city championship in 1965 and the basketball team won both city and state championships in 1967, He organized tennis and golf competition for the Montgomery Parks and Recreation for all the Montgomery junior high schools. He was instrumental in developing the Fellowship of Christian Athletes in Montgomery. He was nominated for the YMCA "Man or the Year" and for Physical Education Teacher of the Year. Pat was inducted into the Robert E. Lee Hall of Fame in 2006.

Following his retirement from the field of education, Pat formedProfessional Packing and Shipping, which is successfully operating today. For the past 10 years, he was a 'professional driver' in the Relocation Division for Enterprise Holdings, Inc.

The years slipped by while we went our separate ways, me to Auburn and Pat to Troy. Without planning it, we both wound up in coaching. The coaching business was good to me and Pat. He was probably a better coach than me. I know he was a better basketball coach. In fact he should have been hired as Coach Leon Ford's replacement at Robert E. Lee in 1965 when Ford was hired at Chattanooga. The Montgomery Board of Education has been known for bonehead coaching decisions. None other shall be discussed here. You may call me at The Alabama Gazette for more information.

When things are going wrong and I feel sorry for myself, there will be no phone call saying, "Edward H. Jones, this is Howard P. Garner." This I will miss. Our yearly "adventure" with our wives to strange places will not be the same. Eely Jackson will be there. Walter Cooper will be there. But, the life of the party will be missing. So many things will remind me of Pat.

Thanks Pat... for the memories that are pressed between the pages of my mind.