From The Book Shelf 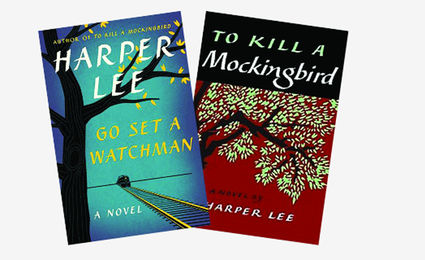 PAGE 103 CHANGED EVERYTHING. Or did it? In the end the self righteous Jean Louise proclaims to Atticus, " I think I love you very much". But wait a minute. Everyone has said Atticus is a racist. How can Jean Louise love this turncoat?

The much anticipated sequel of Harper Lee's novel To Kill A Mockingbird flew off the shelves around America. Sadly, it landed with an enigmatic thud in most readers' concept of how things are supposed to be in the small rural enclave of Maycomb.

The curious chronology of Go Set A Watchman occurs some thirty years after the famous courtroom scene that catapulted Lee from virtual obscurity to one of the world's iconic writers of this or any time.

Note, however, that Watchman was actually penned in the mid 50's before Mockingbird. Lee shopped the story around to numerous publishers which declined to pursue its release. In Elaine Showalter's biography of Lee, publisher Lippincott described the original draft to be patchy and awkward, somewhat like the character we knew as Scout.

Scout is all grown up and has long since abandoned her tomboy nickname for a more deceptively Southern double name of Jean Louise (JL).

After her tumultuous encounter with Bob Ewell in Mockingbird, we find out that Atticus decided to ship JL to a proper women's college in Georgia. From there she migrates north with degree in hand to land in the more tolerant confines of New York City, otherwise known as " sin city "to folks down South.

She has come home for a two week visit to "simply sit, pure and simple". But nothing in this story is as simple as it seems.

Atticus, now 72, still practices in his hamlet, apparently with a degree of success that makes him a community leader and local hero to most blacks.

JL arrives on the Crescent Limited one sultry day. Hank, aka Henry Clinton, greets her at the station with a kiss and embrace that would make the town blue hairs swoon. " She was almost in love with him".

Hank, Atticus' law partner, grew up on the wrong side of the tracks, but in Maycomb there was no finer man. With Jem out of the picture, Atticus found an able associate and advocate. JL bumps her head on Hank's car as she enters this new old world yet again. The two lovebirds arrive home to find Atticus agitated.

As the Finches exchange "pleasantries", the reader begins to see the aging Atticus in a different light. Crippled by rheumatoid arthritis, Atticus can not button his shirt or even shave himself. But no complaints by him about his health.

On the other hand , his disdain for the US Supreme Court's "bid for immortality" mentioned on page 24 prepares the reader that his once even temperament may have been recalibrated over the intervening years.

Alexandra, Atticus' sister, imposes her will as well as her stature on JL. Her cutting remarks that attended Jem's funeral two years prior still felt just as painful. Jem, it seems, like his mother, died of a broken heart, literally.

After his son's death Atticus built a new house retaining the old furniture. This imagery of new vs. old plays throughout the novel. "The same hearts beat in new houses after the war. Aged timbers stood strong under their additional burden. Jean Louise didn't like the new Maycomb and described her attitude as a conservative resistance to change". p 46

A lengthy, unnecessary flashback runs for a dozen or so pages. We watch Jem, Scout and Dill go about their playful mischievous ways. JL returns to the present and takes a dip with "Hank" at Finch Landing. JL complains to her would be betrothed, when she discovers the family landing belongs to Atticus no more, "I just dont like my world disturbed without some warning."

Part III brings the reader to Sunday church and the source for the title. The Doxology change annoys JL almost to the point of saying what had been, and what would always be, was no more. But to the congregation, she realizes, the new melody was either not heard or worse yet, just dismissed by them. And while Dr. Finch described pastor Stone as having " the greatest talent for dullness he had ever seen", somehow the Watchman scripture resonated with JL.

Much speculation has swirled around the language of Isaiah, Chapter 21:6.

"For thus hath the Lord said unto me, Go, set a watchman, let him declare what he seeth."

A watchman in Biblical times sounded the alarm when someone or something approached the area of his responsibility whether crop fields or city gates. Isaiah, the prophet predicts the fall of Babylon because of the evil tolerated or ignored by its people for the sake of maintaining the status quo.

But who does Lee command to watch? Not JL who blithely arrives into her town seemingly unaware at age 26 of the malfeasance of the culture. Not Atticus, who has succumbed to not only a physical paralysis but apparently paralysis of the mind as well. The Supreme Court does not watch, it executes (via Brown vs Board of Education, 1955) ordering the country to cease prejudice and discrimination. Atticus doesn't like the message or the messenger.

The book's cover is not simply a train to Maycomb. It could be the messenger. The knot on the tree has been filled as the locomotive rolls in to town. The black engine not only carries a "bigoted" JL (p. 266), it is a symbol of the future coming to a sleepy crossroad bringing ideas that may not fit so cozily into a family town where everybody is related to everybody else in some way.

Most readers sense the underlying tension and the obvious metaphors Lee brings to the fore. Referencing the past and colliding with the future: Old houses slapped with a new coat of paint; Atticus' dual watches signaling two different eras; Old furniture in Atticus new home; Or even the aforementioned retuned Doxology that the congregation simply ignored.

The culmination of all the innuendo crashes into JL 's world in Chapter 8, specifically, pp 103 and following. Jean Louise idolized version of Atticus (indeed we all saw him the same way) is seemingly stripped away to reveal a white supremacist only out for himself.

The remainder of the book has largely been overlooked by the mainstream media. Almost gleefully, most outlets reveled at the chance to destroy a paragon of Southern virtue and replace it with the stereotypical "whitey".

To be fair, from all outward appearances, it is an easy conclusion to jump to. Stopping the NAACP from meddling in a potentially explosive case, or a repugnant flyer resting by Atticus' chair, or haranguing the Supreme Court for its edict without empathy, all are fodder to draw an inaccurate conclusion of Atticus' methods and motives.

Had it not been for uncle Jack, JL surely would have walked away from Maycomb with her nose in the air, disgust on her shoes and the reader would have probably joined her. But Dr. Finch eloquently brings the volatile family situation into perspective weaving historical dynamics along with some good old fashioned country remedies to help JL see Atticus in a light that makes her once again adore her dad. Not in the sense that he is a deity anymore, but that he is a man who loves his daughter and loves the law. And as the saying goes, the law is a jealous mistress.

This might be a good point to end on, but just a few more comments.

Calpurnia, the Finches retired help whose grandson ran over a white man; her name means a "woman of power." When she quietly shakes her head to the question, JL poses, "do you hate us?". JL fails to see the power in her response. Just as many in our nation could not understand the families of those slain in Charleston expressing the same prayful power when confronted by evil.

Zeebo is the grandson in this novel, In Mockingbird, he was Calpurnia's oldest son and the trash collector who disposed of the dead dog. He was one of few literate blacks. This apparent inaccuracy leads some to an unavoidable conclusion.

Someone much more diligent than I observed that this novel was probably the first draft of Mockingbird. To support that position, one need only compare the text of the two. No less than ten times in Watchman do we find exact and I do mean exact phrases, sentences and paragraphs identical to those found in Mockingbird. If you go to our website, alabamagazette.com, you may see these portions lifted from one and placed verbatim on the other. Much speculation surrounds the decision to now publish this less than stellar piece of literature, especially when the first was received with such acclaim. The simple answer is, as it usually is, money.

In her last known interview, Lee revealed that she thought of herself not as being "Scout" but "Boo Radley", the reclusive, kind, quiet soul who was the unsung hero of Mockingbird.

It appears that Watchman was a first stab by Lee trying to express her own feelings of independence from a culture of which she harbored mixed emotions of love and hate. Watchman rambles, it twists, and it falters at key moments. Not unexpected from a young budding writer. But, a significant disappointment to the literary world hoping for something more.

To us regular readers, she bumped her head one last time.

OF GOATS & GOVERNORS By Steve Flowers

Few states have as fascinating a political history as Alabama, especially in the post-World War II era. Moving onto and off the state's electoral stage during this time period of remarkable transformation have been some of the most interesting figures in 20th-century American government and politics. Now, the backstage intrigue of Alabama politics receives a lively treatment in Of Goats and Governors, the high-spirited new memoir by former Alabama Representative Steve Flowers.

Steve Flowers is Alabama's most watched and read political columnist and commentator. His column on Alabama politics appears weekly in 66 Alabama newspapers.

In addition to his famous column, he serves as the political analyst for the University of Alabama radio and

television network. His weekly radio commentary for the University is listened to statewide on Alabama Public Radio. He is also the political analyst for WAKA/the Alabama news network in Montgomery.

Steve served in the Alabama House of Representatives from 1982-1998. During his 16 year tenure he recorded a perfect attendance record. His House colleagues honored him as Outstanding Freshman member in 1982, Most Ethical member in 1988, and Most Outstanding member in 1992.

"Of Goats & Governors offers a peephole through which readers can look back at three exuberant generations of Alabama politics." – Dr. Edwin Bridges, Director Emeritus, Alabama Department of Archives and History.

There could be no better guide to this colorful history than Steve Flowers. Former Alabama Attorney General and Lieutenant Governor Bill Baxley says, "Steve Flowers has become our state's leading political columnist and commentator. Of Goats and Governors is delightful."