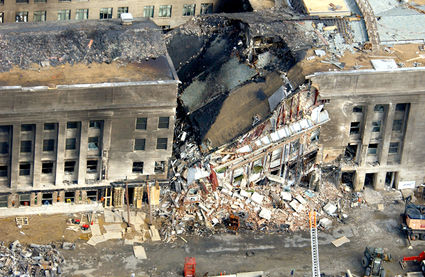 This aerial photograph shot on Sept. 14, 2001, shows some of the destruction caused when the high-jacked American Airlines flight slammed into the Pentagon on Sept. 11. The terrorist attack caused extensive damage to the west face of the building and followed similar attacks on the twin towers of the World Trade Center in New York City.

As we recognize this 15th anniversary of 9/11 it is important to pay tribute to all of the agencies that work together to keep us secure as a nation, including the branch whose efforts we generally know least about-- the C.I.A. International intelligence agencies are absolutely vital in combating terrorism. As such, in the wake of September 11, 2001 many speculated as to whether the attacks on the World Trade Centers and Pentagon could have been thwarted had the C.I.A. merely fulfilled the bulk of its basic duties as an intelligence agency. Two years before the attacks a June of 1999 publication by NATO entitled The Role of a Security Intelligence Service in a Democracy summarized the duties of modern, democratic intelligence agencies into 3 main areas: the broad functions of collection and analysis, and the more specific function of covert action. "Counterintelligence" is considered a function inherent to all 3 of the specific duties. The argument espoused by many, including many of our elected officials in the 9/11 Commission, was that while the C.I.A. had 'collected' and 'analyzed' information regarding the 9/11 attacks prior to the disaster, the failure to follow through to the third step and act on said intelligence was where the agency had potentially missed a chance to save thousands of American lives. But regardless of one's feelings towards the C.I.A.'s handling of the 9/11 attacks, there is no question that at other times throughout history U.S. intelligence agencies have succeeded in saving countless innocent lives-- both American and foreign. The following is a brief overview of America's first intelligence agency and the immediate impact it had in paving the way for an Allied victory in WWII.

While Great Britain, Germany, Russia and the other world powers of the time had intelligence agencies at least by WWI, America did not have an official intelligence office until June 13, 1942, when an executive order by President Roosevelt established the Office of Strategic Services (or OSS). The earliest pre-cursor to the CIA, the OSS. played an imperative role in defeating the Nazi and Axis powers. But for the first 2 years of its existence the primary duties of the OSS centered around supplying facts and estimates to policymakers. However, knowing that one day it would be called on for that imperative third step of "covert action", the OSS was in constant preparation for the day when there would be OSS boots on the ground behind the Axis walls of continental Europe. For instance, as hundreds of thousands of refugees from Europe entered the United States between 1942 and 1943, OSS operatives would not only contact them for information, but also for clothing and other possessions that an individual going undercover in Nazi Europe would need to successfully blend in.

By late 1943 the OSS were attaining vital information regarding the Nazi war effort and otherwise aiding the work of the Allies by spying, sabotaging Nazi missions and equipment, spreading anti-Nazi propaganda, and organizing and coordinating anti-Nazi resistance groups in Spain, France and other parts of Europe. Specifically, OSS intelligence led to the decision of when and where to launch the D-Day invasion, based on intelligence regarding the positioning of Nazi troops at the time and the somewhat successful attempt by the OSS to have Nazi leaders believe the attack on mainland Europe would be coming from Calais or even as far north as Norway. Therefore, a widely held consensus of WWII scholars espouses that without the work of the OSS, D-Day would have claimed an even larger number of causalities, or could have possibly failed altogether. The horrendous prospect of a failed D-Day invasion in regards to the increase in casualties from the day as well the rest of the war, as well as the damage to the Allied war effort as a whole. Indeed had D-Day not been successful, there is no guarantee that the Allies could have gone on to win the War at all, and, as Churchill noted in his diary, the prospective nightmare kept Churchill and Roosevelt awake for weeks prior to the established date for attack.

And although success at D-Day changed the tides of war in favor of the Allies, the Nazi's were by no means ready to give up and made it clear to U.S. and British forces to the west of Berlin, as they had to the Russian forces east of Berlin, that there would be no surrendering. For this reason OSS intelligence was still desperately needed up until the very end of WWII. In fact, on September 2, 1944 America's first intelligence agent parachuted directly into the central German Reich. The reason for this mission was to gain information on the strength and position of the Nazi military, as well as their ultimate plan for the end of the war. OSS agents working undercover as Nazi military agents, factory workers, and even SS leaders, soon uncovered Hitler's plan to have the military elite and SS leaders retreat to mountain bunkers near Hitler's private fortress in northern Austria. Armed with enough weapons and food to make the war last at least another 2 years, Hitler planned to force the Allies into a type of guerrilla warfare in the unfamiliar, dangerous territory of the Alps, and although winning the war from this position was a virtual impossibility even to Hitler, the strategy would indeed lead to massive increase in the number of Allied causalities (some historians estimating that as many as 2 million more Americans could have been lost during the time it took to completely roust the Germans from their bunker, a figure which doesn't even account for the Russians, Brits, and others would also die during that time period). Thanks to the early recognition of this plan by the OSS, however, the Allied forces were able to thwart this strategy and take Berlin after Hitler's suicide, saving an unknown number of lives on all sides of the conflict.

After the Nazi's finally surrendered in May of 1945, the OSS was sent to Japan in order to subsequently put an end to the fighting that continued in the Pacific Theater by solely concentrating on intelligence operations that would end the aggression of the Empire of Japan for good. And indeed once the OSS arrived in Asia it was only a matter of months before Japan also surrendered, and by September the OSS-- after fulfilling its proscribed duties with remarkable efficacy-- was temporarily disbanded. In January of 1946 President Truman re-assembled the OSS under title of the Central Intelligence Group (C.I.G.). A year later the National Security Act of 1947 again changed the name and assumed more of the former OSS members and duties. This time though the agency was donned the Central Intelligence Agency, and accordingly the C.I.A. has been the penultimate intelligence agency of the U.S.A. ever since.

At the height of its influence during WWII, the OSS employed almost 24,000 people. The first leader of American intelligence, William "Wild Bill" Donovan, worked closely with the British early in the war to base the OSS on Great Britain's Secret Intelligence Service of MI6. On August 14, 2008 the previously secret names of all OSS personnel were made public and included a number of individuals who were either celebrities at the time or who would later go onto to become famous after their service in the OSS. The list of 24,000 names included Julia Child, Ralph Bunche, Arthur Goldberg, Saul Padover, Arthur Schlesinger, Bruce Sundlun, Rene Joyeuse, John Ford and Moe Berg. The bravery, patriotism, and self-sacrifice exhibited by the OSS in WWII clearly exemplifies the greatest of American virtues. It is truly frightening to consider the outcome of WWII had there not been an OSS, and 70 years later the same remains true for the security of America today. Though we hardly ever see what the C.I.A. is doing to protect our nation, and though there are times when legitimate criticism of the agency has been warranted, there is no question that we are a safer nation because of the brave men and women that serve our nation's intelligence service.

Major League Baseball player Moe Berg was recruited by the OSS in 1943 because of his language skills, assigned to the Secret Intelligence branch, and took part in missions in the Caribbean, South America, France, England, Norway, Italy, and the Balkans. Later, Berg was briefed in nuclear physics, and sent to Zürich, Switzerland posing as a Swiss physics student, with the mission of attending a lecture at the Technische Hochschule by Germany's top nuclear scientist, Werner Heisenberg. His orders were to kill the scientist if he determined that the Germans were far along in their efforts to build an atomic weapon; he found that the scientist was not a threat. Berg was awarded the Presidential Medal of Freedom, but declined to accept it as he was forbidden from saying what he had done to receive the award. He is the only former Major League baseball player whose baseball card is displayed at CIA headquarters. (Boxerman, Burton Alan and Boxerman, Benita W. Jews and Baseball: Entering the American mainstream, 1871–1948 Jefferson, North Carolina: McFarland, 2006. p. 109)