A Big Boy and His Dog 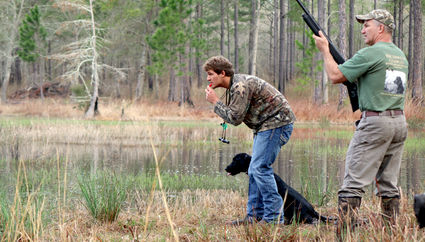 Ben and Kenny Graham with Delta at a field trail.

For far longer than we've been around, man and dog have been a team in hunting as well as life itself. The bond of loyalty and trust between the two is a privilege and a joy that only those who raise a dog can know. Dogs are beyond clever and loyal when brought up with good hand, and their skills are definitely on display when hunting.

For starters, there are a whole lot of ways to go hunting with dogs. Be it duck hunting, squirrel hunting, raccoon hunting, hog hunting, deer hunting, rabbit hunting, quail hunting, pheasant hunting, or any of the other varied ways to get out there and get after 'em, dogs always have a place by their master's side out in the woods or in the field. Retrievers, pointers, flushers, they all have their place. Sure, there's some training to do, but those loyal companions enjoy the hunt as much as we do. It's a great form of exercise, and they're all too happy to get out there and enjoy the world like we do.

For instance, I've got a Brittany Spaniel named Chipper, and every morning he gets in the car with me to go get some coffee. We head to the convenience store, grab the paper, the coffee, and head right on back home. He sits just like a person in the front passenger seat, just staring at anybody that pulls up next to us at the light. The look he gets in return is probably one of the highlights of my morning, as they weren't expecting to see a dog staring back at them, with just a slight grin on that dog face of his. Sure, we're not hunting birds or small game, but even if it's just hunting a biscuit, there's a great bond to be shared with our canine companions every day.

Now, there's a young fella out there named Ben Graham, and I got a chance to learn about him and his dog Delta, a black lab. He's had Delta since she was a pup, and he had to go up to Tennessee to get her. Since then, they've been together, day in, day out. Not just as a dog and owner, but as partners and best friends. During their first summer together, they focused on obedience training, improving their communication and teamwork. Delta was a natural, with a deep love for retrieving. At the South West Georgia Hunting Retriever's Club's fall hunt test of 2014, she earned her first two ribbons, followed by a hunt test in March for SOWEGA. Acing both of those tests, she earned her first UKC title. Now doing AKC tests, she's just one ribbon shy from her first AKC title, which is no small feat. She's gone from test fields to actually waiting behind the blind for some ducks to take a dive as they pass over, and Ben says he hunting season was incredibly smooth. Even just one year together, you can definitely see the bond that Ben and Delta have. They'll be spending every weekend together in Mississippi duck hunting, and will only miss Tuesdays and Thursdays from the duck hunts for his schooling at AUM.

Of course, this is just the beginning for Ben and Delta. Ben's dream is to become a full-fledged dog trainer, making a living doing what he loves. Given the success he's shown with Delta so far, it's not hard to imagine Ben making a great name for himself in the business, and I for one look forward to the day when I can get him to work with me on some dogs.

That's right; this Big Boy is a dog lover. When I'm at Great Southern Outdoors, I spend a great deal of my time working with dogs. They've got a whole kennel of them, and each one has its own personality. In fact, there's a couple or more of them that don't want to run fields unless it's with me! I've got one dog down there named Jake, and he's a brilliant German Short Hair. If he's 10 yards out ahead of me, and I say back, he's immediately back to my side. If he's 200 yards out, and I say back, he's back to my side, quick as can be. He does everything you could want a dog to do out in the field; he points, he flushes, he retrieves. But, just for me, when he retrieves for me, he quickly leaps up and gives me a high five, then gets right back to the hunt. To me, that's something that you can't put a price on, as the trust and loyalty these dogs display is something amazing.

So, though Alabama isn't a premier duck hunting destination yet, we still get an early Canada Goose season, starting September 1st and running through the 15th. Dove Season starts on the 12th of September, and early teal hunting starts September 12th and runs through the 27th. There's plenty of opportunity to let the dogs out and do some bird hunting in Alabama, and you better believe Ben, Delta, and I are gonna be out in the thick of it. So grab your gear, your guns, and you dogs, and go get'em!