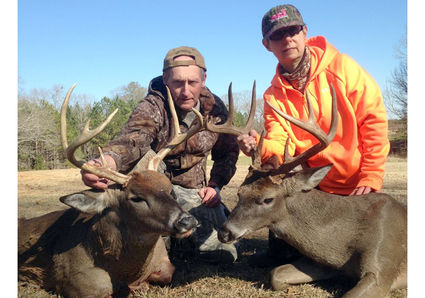 It's that time of year when the weather's finally cooled off a little, the leaves are making a mess of the yard, and deer season has started again. On October 15th, the Northern Zone of Alabama began its bow season. And on the 25th, the Southern Zone, including Montgomery County, will start its bow season.

As I've mentioned before, there's more than a few changes that have been made for deer season this year. Obviously, we've got the change in starting date between zones. Another big change is the amount of deer that you can harvest. This season, you can harvest one doe a day, one buck a day, or one buck and one doe a day. You cannot harvest more than one of each gender. There's a three buck limit for the season as well, so you want to make sure you're picking your three potential trophies carefully! You also need to take care to record your harvested bucks on your Harvest Record, as it's required. You can also contribute to the Game Check program, but I'll get to that later.

What's really important to me, with all of these changes, isn't necessarily about the changes themselves. Instead, I think about why we've made these changes in Alabama. First of all, it's about proper management. Currently, the deer population in Alabama has been on the decrease, overall, but the buck to doe ratio has never been better. With proper harvesting and management, we can continue to improve the trophy buck hunting experience. But what about does?

Think about the 10 day delay in the start of the Southern Zone's season. Many does have birthed fawns not too long before the start of bow season, and those little deer can't fully fend for themselves without a little more time to grow and develop. Those 10 days can make a dramatic difference in the survivability rate of fawns. If you ask me, I'd suggest laying off of does from the beginning of the season, for just a little while. And if you see a doe with a couple of spotted fawns behind it, it's probably not just one deer you're taking the life of, but three.

That same train of thought can work for the end of the season too. During the rut, there's no real way of knowing what you're shooting, as does could be carrying a future trophy buck after conception, so again, you might be taking more than one deer with a single shot, if not a buck you'd rather let grow up to be that new addition to the wall over the fireplace!

All of these changes are based on hard-earned data that the state Biologists have analyzed and processed time and time again, year after year, to see how we can improve hunting in Alabama. At over $1.8 billion a year, hunting brings a different kind of buck into the state in a big way. It's definitely in our financial interests to take good care of our deer population.

In fact, there's some speculation that there might be a shift in the start of archery season, or a two-week period of buck-only hunting. I'd be all for a trophy season!

So where does that data come from? Well, aside from their own field work, we now have the Game Check program available on your smart phone. By putting in the data of your harvested deer, you can do your part to help us keep Alabama at the top of the list for trophy buck hunting destinations. I strongly, encourage every hunter to contribute to the Game Check program!

Every bit of data helps us keep making changes for the better. So get out there, stick em, tag em, and report em to the program! Good huntin', yall!