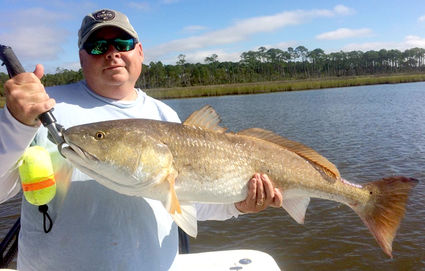 You know, it's getting later and later in the year, but that doesn't mean the fishing has let up any. In fact, right now is the perfect time to get out there and do some in-shore fishing for Speckle Trout, White Trout, and the big old Bull Reds!

Just this last Thursday, myself, along with Bruce Lieberman and AB Smith, loaded up and made the 3 hour drive down to the Fowl River Bridge for a full day of fishing with Captain Chad Palmer. The Captain is a former blimp pilot who decided that life on the water would be better for him and his family, and he absolutely kills it! He started up Finatics In-Shore Fishing Charters and never looked back.

When we hit the water, the temperature was in the upper 50's, with a high of 83. We had a light breeze of 3-5 mph. The Mobile Bay was slick as glass, making spotting the fish pretty easy. Those big Bull Reds were hanging out near the surface, schooling around on the look-out for some lunch. Heading around the bay and the Fowl River, you could see the Porgies, a type of bait fish, jumping out of the water as we made our way up river. I know a lot of folks believe the bay's been fished out, but we could see fish everywhere. With good management of our fisheries, I'm confident that we'll consistently have great fishing in the bay.

In our 6 hours of fishing, we managed to land close to 100 specks, white trout, and a few reds. There were times where you couldn't throw a line in without pulling a fish back in with it. It was an absolute blast! Out of those 100, we could keep about 50 of them for the table, and let me tell you, we fried-em up the next day and then the real fun was on. Captain Chad and his deck hand Eric filleted all of our catch, and it was some mighty fine eatin.

Not to get too carried away with my favorite part of any fishing trip, cause I love to eat some fish, but the fishing itself is fast and consistent. We used live shrimp and popping corks, as that bait works the best. In fact, when you see the shrimp, who wants to have a say in the matter, trying to jump out of the water, you know you're about to have a fish on!

If you're interested in running with the good Captain, feel free to hit up his website at http://www.finaticsinshore.com and drop him a line. For 1-3 people, it is $500, with $50 for each additional person up to 6 folks total. The average trip runs 4-6 hours. All you need to bring is Food, drinks, sunscreen, and a hat! Don't forget that camera!

I know I'll be heading back down before long, so hopefully you guys will give in-shore fishing a look and read, because lemme tell you, it's worth it! Bow hunting and football are on the brain for most folks, but don't forget about those fish! So grab your gear, get your hook wet, and go get'em!