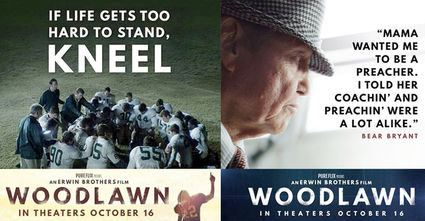 Based on the Extraordinary true story

Writing about politics is rarely encouraging. In fact, I've been at a crossroads for a few weeks and admit I have been struggling with putting words to paper.

When asked to contribute monthly to The Alabama Gazette in October 2010, I was incredibly honored that someone considered my thoughts and words worthy of print.

Initially, writing was somewhat easy because there was so much to discuss – so many battles to fight – so many people who fervently believed we could reverse the political course if only – so we were told – elect more Republicans. Many battles remain but, sadly, the majority we helped elect has seemingly become tone deaf to those of us in the grassroots and have too many times capitulated to the demands of the special interests and political ruling class.

I've considered that I have possibly run out of words and that the constant "whack-a-mole" political issues are too far gone for redemption. Or, that too many of us have been deceived to believe anything will really ever change.

Further, the recent and horrific terrorist attacks in France appear to be yet one more sign that this world is simply burning out of control.

But just when I thought it might be time to walk away for a time, I've experienced renewed hope. Oh, not that cheap "hope and change" rhetoric that we've somehow endured for the past seven years – no, REAL hope for lasting change – and the faith that will never be delivered by politicians.

That hope was expressed in the form of a movie, and in watching its impact on thirty 6th grade Montgomery inner city young men who are being led to rise above the hurdles and hostility of their neighborhoods.

The movie is Woodlawn and these 6th graders attend Valiant Cross Academy, an all-male Christian school operating in its first year at River City Church, formerly known as the Dexter Avenue Methodist Church. Woodlawn is the production dream of Birmingham-born brothers Andrew and Jon Erwin; Valiant Cross is the education and community dream of Montgomery-born brothers Anthony and Fredrick Brock.

I don't personally know these 6th graders and my rural Caucasian world is far removed from the one in which they live. Along with several others who have been praying for this new school, I was invited to attend as a chaperone, but our presence was hardly needed as these young men were by far some of the best-behaved and well-mannered children I have ever seen.

At some point during the movie, as I sat with young and old, black and white, male and female, seeing these young children enthusiastically embrace the movie's theme of forgiveness and Christ's love as being our only hope, a good bit of my discouragement began to melt away.

I do not pretend that the serious problems in our own communities, state, and nation diminished that day along with my discouragement. If anything, our fiscal, social, and security crises are intensifying at a frightening pace and the chance of our nation destroying itself from within looms larger than ever in my lifetime.

Yet a movie and a fledgling school still provides me hope. Woodlawn gives hope because it relates the true story of a football team and an entire school coming together despite racial turmoil because of the love of Christ. Valiant Cross Academy offers me hope because of its intent to not only educate at-risk young men academically, but to also teach them to rise above whatever obstacles life throws at them with honor, discipline, integrity, excellence, and love. Their mission beautifully states: "The world does not need supermen. It needs supernatural men; men who will learn from their youth, to let go of self, to let the power of the Holy Spirit raise them to new heights. Courageous men, righteous men, committed men, loving men who will rise up to lead, to serve, to inspire."

Whether it be movie producers sharing the much-needed Gospel or dedicated adults who commit to giving thirty 6th graders an educational opportunity to "rise above" and beyond their expectations, the lesson to remember is we always have hope – and there is always somewhere each of us can serve to save our nation. It's time for us all to "rise above."