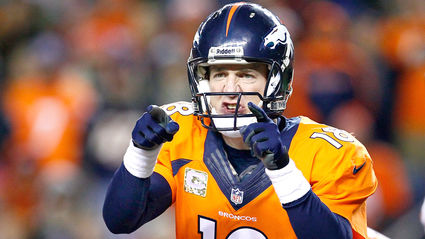 Levi Stadium in San Fransisco could be "Peyton's Place" on February 7, 2016. Two months shy of his 40th birthday, Peyton Manning will start the 50th Super Bowl with a determination to end his remarkable career with a win for the Denver Broncos over Cam Newton and the Carolina Panthers. This is a contrast between the past of one of the greatest quarterbacks in history (Manning) and the new breed of quarterback (Newton) which may define the future. Peyton will be the oldest quarterback to start a Super Bowl at the spry young age of 39. Newton will be one of the youngest quarterbacks to start a Super Bowl at the really young age of 27. This is a first for Newton. It will be Manning's fourth. He is 1-2 in Super Bowls. Manning has no more Super Bowls in his physically challenged, broken down body. Newton has many Super Bowls to fight for in his seemingly indestructible, physically powerful body. It is indeed a contrast in age, experience and style. Never has a Super Bowl had such contrasting quarterbacks. It's the brainy 18 year veteran (Manning) and the five year wonder (Newton). It's "The Sheriff" against "Superman". It will be "Peyton's Place" or "Cam's Casa". In the minds of most football pundits, regardless of the outcome, it will be Peyton Manning's last hurrah! I really hope he retires before he permanently damages himself.

Should Peyton Manning manage the game with his experience and know-ledge of defenses, the Denver pass rush of Von Miller and DeMarcus Ware will give the Bronco's a chance to send Peyton riding off into the sunset of his playing career with his second Super Bowl ring. His first win came when he was with the Indianapolis Colts. No quarterback in history has ever won a Super Bowl with two different teams. This could be a trivia question for decades if he wins.

Peyton comes from good football stock. His younger brother, Eli, has won two Super Bowls for the New York Giants. His daddy, Archie Manning, was building his legacy as quarterback of the New Orleans Saints when Peyton was born. Archie is more of a legend at Ole Miss than Peyton is at Tennessee. He was the best college quarterback that I had ever seen. Of course that was in '69, '70 and '71. In 2010, I saw a phenomenon which is unexplainable even today in quarterback Cam Newton, as he led Auburn to a national championship. Cam had already won a junior college national championship. Now he is vying for a third national championship, the 2016 NFL Super Bowl. So, even though Manning has the edge in experience, Newton has been on the national stage before. He will not be intimidated by the pressure of the Super Bowl. He really has less pressure than Manning. Manning has to win. Newton will have other chances.

The two quarterbacks represent a long list of contrasts, but they have some similarity's as well. They are both good field generals in that they make good decisions in the heat of battle. They are both leaders. Every member of the Broncos want this game for Peyton. He is their guy. The Panthers look to Cam to do what he does best - lead the way. Both command their locker rooms. Coach Gary Kubiak of Denver leans heavily on what Peyton thinks in preparation and during games. Coach Ron Rivera of Carolina gives Cam much freedom in altering the game plan to fit his skills into the situation at hand. Peyton is a coach on the field. Cam has an engine that cannot be governed, a strength that can't be harnessed. Peyton is a shadow of himself. In his prim, he was really a force to be reckoned with, as Cam is right now approaching his prime. Both will be in the Hall of Fame someday. Peyton and Tom Brady of the New England Patriots are the best of the "drop back" quarterbacks. Cam Newton and Russell Wilson of the Seattle Seahawks are the best of the new breed. One cannot categorize them. They play the position with improvisation never seen in the NFL.

As bad as I would like to see Manning end his career with a victory, I hate to see Cam Newton lose. Two former SEC quarterbacks have never faced each other in the Super Bowl as far as my recollection. There are so many reasons that this Super Bowl is different...No matter who wins, this will be fodder for the coffee clubs all over America for years to come.