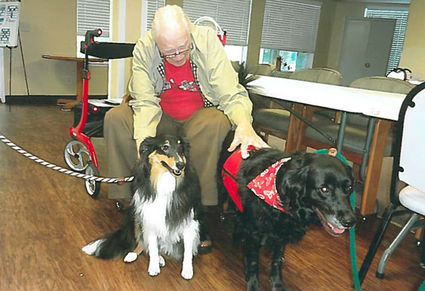 Willa and Cassie with their senior citizen friend

It's been a good eight decades since your humble scribe has enjoyed the company of a dog; and then it was for only a short time.

But now, canine company once more brightens this humble life, albeit its once every fortnight, and then for only an hour. But, one makes the best of what one is allowed.

This time its many dogs, but they belong to someone else. At any rate their company is enjoyed even though its only twice in a month. And it is enjoyed with a vigor, as may be witnessed by the way the dogs' countenances light up at our meeting. And so it is with other seniors when "Dogs on Call" make their twice monthly visit to Elmcroft at Halcyon – bringing with them great pleasure and companionship.

Carolyn McFeely and her daughter, Sherry, bring with them two beautiful canine friends, Willa and Cassie, and a host of other pet owners share their pets with seniors, for whom their fortnightly visit is greatly anticipated and enjoyed; as well as that of other canine members of "Dogs on Call," who stop by, first at Eastdale Estates independent living facility, then they share their presence with your chronicler, and other residents of Elmcroft assisted living facility on Halcyon Boulevard.

At these meetings one may witness the joy it gives to the residents wherever such meetings take place. And, if you don't believe this, just ask Columbia Professor Mary Park Byrne, who writes: "It doesn't take a scientist to know that pets make humans feel good; anyone who's ever stroked a dog's fur or felt a cat's thrumming purr knows this."

She goes on to note that: "Just 15 minutes bonding with an animal sets off a chemical chain reaction in the brain...."

The faces of the old folk at Eastdale and Elmcroft light up and smiles brighten their countenance at each fortnightly visit. These visits mean a lot to the residents.

One Saturday, for example, your humble scribe forgot about the dogs' bi-monthly visit, until there came a knock on the apartment door and there awaited a bevy of dogs who filled the apartment with excitement and tail wagging-their trademark. They hadn't forgotten their old friend.

"Dogs on Call" are a part of Easter Seals of Alabama's "Canine program," which has been bringing joy and happiness to seniors in the Montgomery area since 2008.

The volunteer, non-profit group supports, trains, and certifies both the dogs and their owners to provide compassion and assistance to folks in a variety of settings, such as hospitals, senior living facilities, schools, hospices, and a variety of other settings, where their presence is greeted with anticipation and pleasure.

Among those who regularly visit with the seniors are: Sherry McFeely and "Cassie," and her mother, Carolyn, who brings "Willa," to visit with the old folks. Also making regular visits are Anita Sherman, who brings "Charlotte," to the Saturday sessions, and Cheryl Dorsey with "Mora." Claire Edwards brings "Scout," and another "Scout" comes with Lynn Higgins.

"Dogs on Call" is a 501c3 non-profit organization. The dogs are tested at several levels of certification. Nationwide, they provide comfort to more than 25,000 people annually.

Anyone who has been watching the side show labeled "Presidential Debates" has probably heard a frequent reference to brouhaha. The word itself seems more than applicable to what the so-called Republican "debates" have become.

We know what the event has degenerated to on our TV screens, but has anyone ever wondered where the word itself comes from, or what it originally meant.

There are those who believe it came from a Hebrew phrase: bar Ukh hasbba, which meant "blessed be he who enters."

But the word itself comes from the late 19th Century French version of the Hebrew phrase, which eventually came to mean a "noisy confusion of sound." At least that's what the Internet reveals.

And if what we've been watching on our TV screens lately is any indication, it sounds as if brouhaha, might just do the trick.

From this writer's standpoint, what's been going on under the guise of "Presidential debates" also brings to mind the word anarchy. It can't come to an end too soon.

You may be over the hill if... it costs more for the candles on your birthday cake than it did for the cake