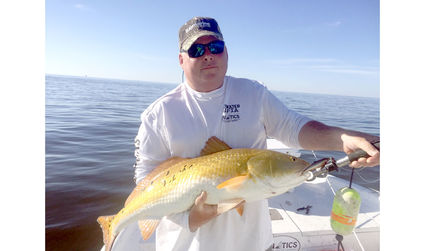 By the time you folks get to cast your gaze over this article, there will only be 6 days left in Turkey season! For some, it's been a pretty darn good year for turkey hunting, while others have found it to be a little on the slower side. Regardless, it's going to be wrapped up fairly soon, and as we approach the end of one season, my mind starts to steer towards the next season. And in this case, I've got fishing on my mind.

I imagine y'all might be a bit more familiar with fishing down in the Mobile Bay by now, as I've written about it before, but we're finally at that point where things are starting to really heat up, literally and figuratively! My great friend, Captain Chad Palmer, with Finatics In-Shore Fishing down in the Mobile Bay Area, has let me in on what's going on down that way, and boy is it starting to look good!

So, Captain Chad's got himself a state license for Red Snapper, which means he can now fish out up to 9 miles off-shore for those big boys. The state season also typically lasts longer than the fed, which will end pretty darn early. This change in state law is a new development, so be sure to take advantage of it with the great fishing we'll have this year! Of course, you can fish for a lot more than snapper, and Captain Chad's given me the rundown on what's biting.

He says that since the water's started clearing up Dauphin Island, trout have been spotted and are increasing in number, making for some good fishing. The Sheepshead spawn is still good for a couple more weeks on nearshore rigs. As for the big red bulls, lots of schools are hanging out just off the beach. Spanish Mackerel are also starting to show up along beaches as well. Cobia should have their run rather soon, as they've been caught as close as Pensacola.

As you can see, Captain Chad's got his fishing on lock; he knows his stuff. I asked him for any tips or secrets he could pass on, and he figured he'd let me in on one; his approach for the trout and red bull relied on UnFair Lures. He swears by them.

All that being said, Finatics In-Shore Fishing has multiple boats and captains, and Chad says that booking is really starting to fill up. So, if you're interested, feel free to drop on over at http://www.finaticsinshore.com/ and see about booking in advance to make sure you don't miss out on some excellent fishing!

I'm interested in hearing about how everyone's turkey season has gone, and I know I'll be enjoying this last week we have. My mind's on fishing, but I'm not gonna be giving up on these thunder chickens just yet! So grab your camo, your ammo, and maybe wet your hook and lines, and get out there and go get'em!