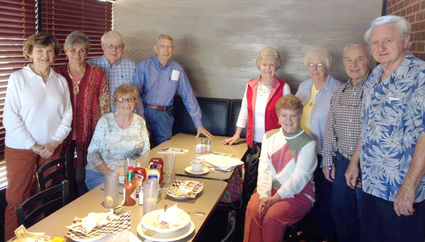 The 60th reunion of the class of '56 enjoyed a wonderful meal at a great facility inside the Wynn Lakes Country Club April 16, 2016. It was so special to see 78 year old friends acting like teenagers, that is, those who could stand up without assistance. Some even tried to dance to the sounds of the '50's'. Not many danced very long. There were no oxygen tanks in the room. After me and my wife Betty tried to dance "The Panama City Bop", we were glad to hear the end of Chuck Berry's "Long Distance Information". The last announcement made by the program emcee was "Eat, Drink, Be Merry and Go Home...if you can!

The class of '56, the first graduating class of Robert E. Lee has remained close over these sixty years. There were 144 who graduated in the first class. Many went on to distinguish themselves in the military, the arts, education, science, business, medicine and coaching. They have been selected to various halls of fame. This includes the Robert E. Lee Hall of Fame.

It all started in the spring of 1955. A new high school was being born on Ann Street in what was then East Montgomery. At the time, Sidney Lanier High School, which had been an intellectual bastion of excellence and an athletic power in the state of Alabama, was bulging at the seam, with over 2,000 students. News of the new school's birth was somewhat confusing to nineteen Lanier football players, who would be eligible to transfer to the new school, which would be named Robert E. Lee High School. They had all grown up hoping to play football at Lanier, so there was some hesitation as to what to do.

Some fellow named Tom Jones had been hired by the Board of Education to be head football coach. Coach Jones played for the great Coach "Hot" O'Brien at Tallassee. This experience would serve him well over the next thirty years.

Coach Jim Chafin, the first year line coach at Lanier, would be going to Lee to coach the line and be the baseball coach. Coach Leon Ford was picked to coach basketball along with duties coaching the ends in football. Coach George Peters was selected as the "B" Team coach.

There were nineteen Lanier players that were upcoming juniors or seniors who had the choice to stay at Lanier or transfer to this unknown and unseen Robert E. Lee High School. The other Lanier students who lived in the new Lee District had the same option.

All but four players agreed to transfer. These fifteen players, along with the rest of the students who would make up the first Lee student body, picked the colors, the nickname, the name of the school newspaper and the name of the yearbook. You could say that this class laid a strong foundation for those to follow.

Who would have believed that the Lee football teams would win five state championships in the first ten years under Coach Jones. Coach Chafin had great baseball teams and would later become head football coach and win a state football championship as well. Coach Ford annually contended for the state champ-ionship in basketball. He would eventually become the head basketball coach at the University of Chattanooga.

It should be noted that Larry Chaver, the class president of the '56 class, has attended every reunion. He lives in Oregon and has even come when he was ill. We owe a debt of gratitude to a man of his character who believed that he was so responsible to this class.

Marie Parma and the reunion committees over the years have been so faithful in keeping up with the class of Robert E. Lee High School, 1956. This has resulted in such great attendance. Over 100 people made the 60th reunion...the best reunion of all!

How Long It Has Been!