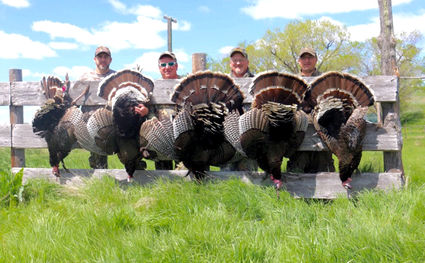 I gotta tell ya, folks, I just got my final turkey hunting fix for the year up in lovely South Dakota! Dan Schofield, Hunter Smith, and myself had 8 tags between the three of us, and in 5 days managed to tag out! The weather was phenomenal; pretty every single day. I've been making this trip each May for 23 years now, and even compared to every other time I've been chasing down those Merriam's Thunder Chickens, this year stands as one of the best. Those birds never disappoint!

Of course, good turkey hunting requires something that we don't always take into consideration; good nesting by hens! Every year, we hunters decrease the turkey population, which seems pretty obvious, but leads to more questions about how turkeys reproduce. I recently came across a great article from Jimmy Stafford of NWTF, and I want to share some of these insights with you.

First and foremost, there's an order to the process. Hens have to be bred first before they nest. As it turns out, research suggests that the hen's physical condition has quite a bit to do with when that biological clock kicks in for breeding. If she's not in good enough health, the hen's nesting period will be pushed back later and later, creating complications down the road. What that means for us is that anything we can do to improve the turkey's habitat will also improve nesting.

Once a nesting site is chosen, the hen will lay her eggs, over the course of a few days, until she reaches her compliment of roughly 9 to 13 eggs. She won't hang around the nest unless she's laying an egg. After that, the incubation period begins, where for roughly the next 4 weeks, the hen will stay on the nest, day and night, to keep those eggs nice and warm. She might take a brief break during the day to go get a quick meal, but that's about it. This puts the hen at great risk, as predators such as coyotes won't turn their noses up at a shot for an easy meal.

Hen nesting site choice is something of a mystery, but we do have a few clues as to general preferences. For starters, the nest needs to be fairly close to a good brood habitat, where the poults can be raised properly. Proper brood habitat is usually an open space, such as a road shoulder or a food plot. Hens also like a nest site with some good lateral cover, with light cover overhead to help hide the nest from potential predators. Lastly, hens also like having a good field of vision so they can spot predators before it's too late while still keeping the majority of their body hidden behind vegetation and brush.

The biggest problem facing eggs and poults, however, is predation. Skunks, bobcats, foxes, dogs, hogs, raccoons, crows, and even a few snakes will all make a snack out of a turkey egg. Even after hatching, a young poult is still easy prey for other birds, such as hawks and owls. Various studies place 10 to 40 percent of nests having a successful hatch. After that, poults have a 75 percent mortality rate in the first 4 weeks. The odds are pretty long on turkey survival to begin with, but even so, population numbers seem to be keeping up with intense predation, regular hunting, and other occurrences.

The best thing we, as hunters and outdoorsmen, can do is keep educating ourselves and keep working on providing proper habitat for the wildlife we look after. The hunting season for turkey is over, sure, but the work we put into it is only just getting started. So get out there, throw in some work on that property, and get ready for next year so you can go get'em!