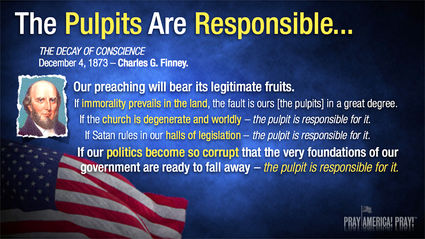 Four years ago, I wrote a piece for The Alabama Gazette that recalled the leadership from the pulpits of the Black Robed Regiment during the founding days of our nation, and how those courageous patriots, with great risk to their lives and property, defied the tyranny of King George with sermons to empower their congregations in the fight for liberty.

At that time, I speculated as to why I believe ministers and pastors today are reluctant to speak out regarding the political issues that threaten our God-given freedoms, and, unfortunately, that hesitancy appears more prevalent now than ever. Too few of our American clergy are willing to risk the loss of non-profit status for their organizations, and too many operate under the fear of litigation or concern regarding repercussions from church hierarchy.

Last year, my friend and recent Congressional candidate Becky Gerritson organized a free pastor's conference in Montgomery to address the increasing threat to our religious liberties and ways in which churches can protect their ministries from legal assaults while remaining faithful to God's truth. Legal scholars and experts from the Jones School of Law at Faulkner University led the conference and shared ways in which pastors can better prepare for the legal storms that lie ahead.

This year, Mrs. Gerritson has planned a second free conference scheduled for Tuesday, August 16th that will expand the topics and provide even more vital information for churches, Christian schools, and Christian ministries. ENGAGE 2016: A Religious Liberty Conference will host Tim Wildmon, President of American Family Association as well as local Jones Law School professor and Vice Dean Rob McFarland, and Associate Professor Adam MacLeod. Other speakers include Randy Wilson, National Director for the Watchmen on the Wall Initiative of the Family Research Council, and a personal favorite, Sam Sorbo, syndicated conservative talk show host and wife of actor Kevin Sorbo, who may be best known for his role as the college professor in the movie God's Not Dead.

According to the conference registration as well as information from Mrs. Gerritson, the conference will "help Christians understand the real threats we face to religious liberty in America." Topics to be discussed include the fallacy regarding the separation of church and state, how to effectively engage the culture to preserve liberty, and why the attack on our families is also an attack on our liberty with ways in which we can rebuild both.

Last year's conference was well attended and I trust that more tri-county pastors will take advantage of this second educational opportunity of learning effective ways in which our churches can stand for religious liberty while maintaining compassion for those in our communities.

Increasingly, conservative Christians are being pushed by marginalization and ridicule to accept government mandates and regulations that put us at odds with our belief system. While it is far easier for ministry leaders and congregations to stay silent as culture redefines the family, marriage, and gender in addition to diminishing the value of life, those who still value liberty, freedom, and the precepts of a moral society must be willing to defend those beliefs by using all the legal means at our disposal.

Given the turmoil in our society today, I would think that church leaders would avail themselves of every opportunity to learn how to protect the religious liberty that was obtained by the sacrifice and blood of past patriots.

When I last wrote about the Black Robed Regiment, I included a quote that I had seen pictured on a church sign: "In the face of tyranny, a silent pulpit is a complicit pulpit." Whether the silence is intentional or simply from not knowing what can be done to stand for liberty, our voices and involvement is needed. Are you willing to share this conference information with your local church leaders?

To register online for the conference, go to http://wetumpkateaparty.com/Issues/Engage2016.aspx or for more details, call Becky Gerritson a 334-452-0453.