Bow Season is In the Air 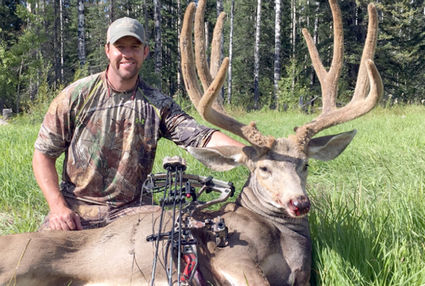 It may just be me, but it feels like everything's settling into place. The air seems just a hint cooler, college football is kicking off, and the anticipation of another round of deer hunting keeps on building. Up first, of course, is bow season, and before we get too excited and just stomp off into the woods, there's a few things you wanna keep in mind so that you don't ruin your season before it even begins!

For starters, you need to know the lay of the land. Sure, you know how to get in and get out of the stand and all, and you probably have a decent idea of where the buck is gonna come out, but the actual method of scouting is important, too. Make sure you're not going in to check game cameras too often, or that you're going in right before season kicks off. Deer are sensitive to pressure, especially those big old bucks, so be wary of tipping them off. The dumb ones don't live long enough to get that big, so don't give them any reason to avoid your hunting area.

This also means setting up a good entrance and exit plan. You want to make sure you're not setting yourself up for failure when you get into the field or leave it. Again, those old bucks are crafty, and they know when something isn't right. Just climbing on down and waltzing off the field at the end of the day is a dangerous proposition, as bucks tend to follow behind does, so even if you don't see any antlered deer on the field when it's time to go, be wary all the same, as spooking them will ensure they don't come back to your spot for some time. In fact, if you need to, just wait till after dark and have a buddy come drive up and get you. If they get spooked by a truck, that's one thing, but they're still not being tipped off by you and your stand location.

Another point is to remember scent control. You want to make sure you're prepared with not just scent control for your camo, but for you as well. It's still toasty out there, and you'll work up a sweat on the way to the stand, so prepare accordingly. Another bit of preparation is to ensure that you've shot your bow, making sure your pins are on point. Keep an open mind about range, as that buck isn't going to just sit there, looking pretty, waiting for you to shoot. Know the layout of your field and the range of your shots. During scouting, a range finder isn't a bad tool to have on hand when setting up your stands and clearing firing lanes. Make mental notes about landmarks to help you stay on target for when it's time to make that shot count. Don't forget about bugs, either. ThermaCells are your best friends, as they have no scent.

As for where to hunt, make sure you know what food supplies you have available. Different years have different sources in different amounts, so your pre-season scouting should definitely involve making and maintaining notes on what sources are available. Of course, you don't want to just plop down on top of that food source, as all you'll likely see are does and yearlings. The big boys, early season, tend to do their eating after dark, so don't just park on that white oak that's just dropping acorns. Rather, set up about 50 yards away or so and see if you can find the big boy at the end of the line of deer processing their way to that supper spot. Lastly, take the time to practice your shots. Even the most experienced of hunters can catch Buck Fever at the worst time, pulling their shot to the side at that critical moment. So make sure you prepare mentally as well. There's no worse feeling than missing the perfect shot! Also check your broadhead's shots. Even if it's mechanical, there's no guarantee that sucker will fly like a field tip, so always check their flight path a few times. Check the condition of your arrows as well. The veterans of a few rounds of shooting may have some bad fletchings or a bend in the shaft, which will only hurt your chances of filling out that tag.

I hope you guys are as excited about the return of deer season as I am. There's plenty to keep us busy, so make sure you're prepared for that shot of a lifetime. So grab your camo, take a few practice shots, grab your game cameras and notes, and go get'em!