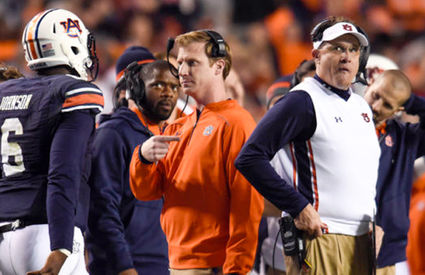 "DON'T ASK ME, HE CALLED IT. ASK HIM! Rhett Lashlee talking to QB Jeremy Johnson as Coach Damien Craig listens during a football game in 2015

Auburn Head Coach Gus Malzahn has been coaching for over twenty-five years. He has been a head coach in college for four and one-half seasons, one at Arkansas State and three and one-half at Auburn. This year, after losses to Clemson and Texas A&M in the friendly confines of Jordan-Hare Stadium, Coach Malzahn announced to the world that he would be giving up his play calling duties to Offensive Coordinator Rhett Lashlee. Lashlee has been with Malzahn for all of his college career and during some of Malzahn's high school years. He was an outstanding quarterback in high school where he played for Coach Malzahn. Lashlee is a bright young man who probably has a future as a college head coach someday.

Evidently for all of Malzahn's coaching career, he has always called his own offensive plays. We must assume that this is true because he mysteriously came up with a plan that he seemed to believe was unique. He said that he would no longer be calling the plays because he could not efficiently take care of his duties as head coach and continue to call the plays. What a revelation! Most coaches learn that from watching football on TV.

In my first job as a high school coach, I had to call the plays because there was no one on the staff but me and a part time assistant named Jack Bell. Bell had been a teammate of mine since junior high school. We both played on the first Robert E. Lee football team in 1955. After service in the Marine Corps, Bell was offered a scholarship to Baylor University to play offensive end. After two years at Baylor, he transferred to Huntingdon and offered to help me with my first team at Catholic High School in the summer of 1962. His experience playing at Baylor was invaluable to me as a first year head coach. His head coach was an old Auburn guard named John Bridgers. Coach Bridgers was the offensive coordinator for Weeb Eubank when he was head coach of the Baltimore Colts during the Johnny Unitas hey days. So, we incorporated a pro style offensive system to complement my split "T" background. We had people split all over the field, people in motion away from the ball and people in motion from wide receiver toward the ball. In 1962 that was not being done in high school in Alabama. We won a few games with this spread motion system and I must say it looked good on film.

But, at no time did I consider conferring with Coach Bell on calling the plays. Sometimes he had to miss practice because of school. Therefore, he would not always know the complete game plan or changes in the offense. At times he would recommend something during the game, and of course at halftime. High schools today seem to have four or five coaches even at the smaller schools. I would have loved to have had on offensive coordinator and a defensive coordinator. At Catholic High School in the early sixties, I was the athletic director, football coach, basketball coach, wrestling coach, track coach and head bus driver. We had to drive from the downtown campus all the way to St. Bedes on the Atlanta Highway to practice football. Of all my duties, I suspect that the best job I did was driving that old Blue Bird school bus.

Now, back to the head coach at Auburn. Gus Malzahn's epiphany is one of the strangest announcements that I have heard from a college football coach. Of course it is best to have an offensive coordinator call the plays. For the three years of Malzahn's reign, he and Rett Lashlee conferred on their head "gizmos" as to what play to call. That is where the title of this column gets it's name. For fifty years I have been saying, "Two people can't drive a pickup truck." I don't know where that came from but it is illustrative of the theory that one person has to be in charge of any endeavor. Two coaches can not call the offensive plays successfully at any level of football, be it high school, college or the NFL.

Steve Spurrier won several championships at Florida and one national championship calling his own plays. It didn't work very well at the Washington Redskins or at South Carolina. Steve gave up calling plays before he gave up football in the middle of the 2015 season. Paul Johnson at Georgia Tech calls his own plays, as does Mike Leach at Washington State, two schools that you would like to have on your schedule. There is just too much that a head coach has to do to keep the ship afloat. He really does not have time to call offensive or defensive plays. Successful coaches run the game. Successful business people run the business. Educators have one person running the school. That's just the way it is. "Two people can't drive a pickup truck"!

Since Rhett Lashlee and Gus Malzahn ceased to be jointly responsible for play calling, Auburn has beaten a very good LSU team, although barely. They have destroyed a not so good Mississippi State team. They destroyed a good Arkansas team 56-3. They are 5-2 as of this writing and ranked in the top twenty again. They have a workable schedule left starting with Ole Miss at Oxford, Vanderbilt at Auburn, Georgia in Athens and Alabama in Tuscaloosa. Auburn will not win the SEC this year. In all probability Alabama will be favored and will be a tough out. However, Auburn matches up well against Ole Miss, Vandy, Georgia and Alabama. It is possible for Auburn to wind up the season with two conference losses which would be good enough for third place in the SEC West, unless Malzahn violates my rule again; "Two People Can't Drive A Pickup Truck"! War Eagle to you coach. You are now on the right track. You be Batman and let Lashlee be Robin! They never lose, but then again, they don't even have a pickup truck.