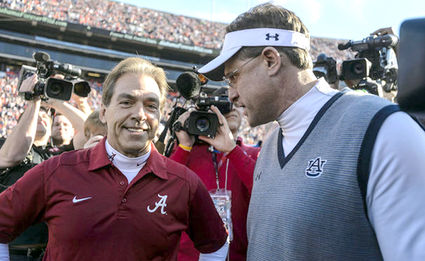 Most of the pundits had Alabama as a prohibitive favorite in the first bowl game of the year, the Iron Bowl. The Vegas line was 17 - 18 points. Many Auburn and Alabama friends of mine wanted to know what I thought would happen Saturday, November 26. My reaction never waivered. I believed that Auburn could make it close if Alabama had at least two turnovers in the game. If not, then I saw Alabama winning by 14 points. They had two turnovers in the first half and Auburn only trailed by four points, 13 - 9. I was only half right. The first half was close but Auburn only produced three field goals by Daniel Carlson, Auburn’s only offensive weapon as it turned out. But the second half was a statistical rout. Alabama scored 17 points to Auburn’s 3, but it was really worse than that. The hapless Auburn offense would have done better by quick kicking on second down or punting on third down. Then the Auburn defense would have had a better opportunity to win the game with eight second half field goals by Carlson. Or, maybe John Franklin could have completed a few more long passes in order to get Auburn in the end zone. It was obvious that no matter how many offensive plays Auburn had, first downs were just not available. The Tigers did scratch out one first down in the first half. Well, that is better than no first downs in the second half of the Georgia game.

It is no disgrace to lose to Alabama this year, they are by far the best in the nation at the end of November. Nick Saban’s Alabama team will walk Florida because they are better and the coaching is better. Beware; Coach Jim McElwain at Florida has nine lives. He used up six prior to the SEC Championship Game. He will probably have to wait until 2017 to use up his other three.

In the Iron Bowl, Auburn’s defense kept the Tigers in the game in the first half. They caused four fumbles, all covered by Alabama. True freshman defensive back from Robert E. Lee High School in Montgomery, Daniel Thomas, intercepted two of Jalen Hurts’ passes which turned into six points. Hurts also fumbled three times but all were recovered by Alabama. All of his freshman miss-steps occurred in the first half. In the second half Jalen Hurts looked like the Heisman candidate that he is. For the game he completed 28 passes for 298 yards as Alabama pulled away for the big win. Alabama now plays Florida for the SEC Championship and for an almost certain play-off spot.

Early in the game, junior defensive back Stephen Roberts returned a punt 58 yards to set up Daniel Carlson’s first field goal. With Auburn’s three and out offense, the Auburn defense was on the field most of the second half but still only gave up a field goal and two touchdowns to the best team in America. Coach Kevin Steele has done a magnificent job in his first year as the defensive coordinator at Auburn. It is yet to be determined how to judge the offensive staff. It appears that the offensive staff cannot come up with any kind of plan to beat a team that is better than Auburn. Obviously, the roulette wheel is not the answer. Every team in America has a first string quarterback and a back-up quarterback that is capable of running the team’s offense. Not Auburn. They are afraid of the second team quarterback, Jeremy Johnson, so they limit his use of the total offense. They are even more afraid of John Franklin, the third team quarterback. He has basically been told not to throw the football. He has shown in limited appearances that he throws very well. He is not as accurate as Sean White, the number one guy, but he threw a 55 yard pass completion to wide receiver Eli Stove against the best secondary in the country in the second half, which accounted for Auburn’s only score of the half, a field goal of course. Maybe he is just lucky. Well, Auburn needs a lucky quarterback. Why was he signed if he was not going to play? That is an interesting question!

Well, lets be realistic. Regardless of the pre-season discussion as to how good this Auburn team was going to be, there were some misconceptions. Coach Kevin Steele came over from LSU to run the defense. He has exceeded all expectations. The offense was still being run by the coach that I labeled “Malzahn the Magician” after the 2013 season. At every stop on Gus Malzahn’s college journey he has had great success with his quarterbacks and with his offenses; Arkansas, Tulsa, Auburn, Arkansas State and the first year at Auburn as head coach. I admit that he had a bit of luck in 2013 when he took Auburn to the National Championship Game. But, since that time he has had relatively bad luck. Coach Paul “Bear” Bryant had a saying that I like; “The harder you work, the luckier you get”. I can not comment on how hard the offensive staff works because I have no way of knowing. I would think that they work very hard and long hours. However, there is something missing in the decision making in that hard work. Someone can not evaluate the talent on hand and the talent to be recruited. No team in the country was as confused as to what to do with their quarterbacks and their running backs as was Auburn in 2016. There has to be a reason and there has to be a solution. We wait, some not too patiently.

Auburn has been overrated all season by the Associated Press, which is made up of people like Paul Finebaum, sports editors of newspapers, radio and TV personalities, most of which have never played or coached football. Surprisingly they come very close to the right rankings. The College Football Committee is made up mostly of Athletic Directors, former players, former coaches, football experts from other areas, and one former Secretary of State. This august group had Auburn in the top 15 going into the Alabama game and had talked about Auburn being a long shot to make the playoffs, that is until they lost to Georgia. Playing a quarterback with a severly injured throwing shoulder in Athens was the low point of Auburn’s season. That is how afraid the offensive staff was to play one of the back-up quarterbacks.

Now, an 8 - 4 season is no disgrace. In fact the Tigers could be in the Sugar Bowl on January 2nd. We will know on December 4th when the CFP Committee releases its top 4 teams. I reluctantly picked Auburn to go 9 - 3 in my pre-season poll in August. Here is a breakdown of the Auburn 2016 football season. Auburn won three games over teams that had a winning season; Arkansas State who is in the Sun Belt Conference with Troy and South Alabama. They have at this writing a 6 - 5 record. LSU could not beat Florida, who has as bad an offense as Auburn’s. They wound up with a fired coach and a hired coach and a 7 - 4 record. Arkansas is the pretender in the conference. They create all kinds of noise every year only to fold somewhere in the season and become ordinary. Arkansas finished 7 - 5. Those three teams compiled a record of 20 - 14.

Auburn won five games over teams without winning records; Louisiana Monroe, Mississippi State, Ole Miss, Vanderbilt, and Alabama A&M. That looked good at the time, but it really was not much of an accomplishment as the season played out. These five teams compiled a record of 23 - 35.

These are just facts and statistics but they do need to be looked at by Gus Malzahn and Athletic Director Jay Jacobs. Changes must be made within the staff or look for another offensive staff. Gus Malzahn has probably bought one more year at Auburn with this not so impressive 8 - 4 season. His record at Auburn is 12 - 2, 8 - 5, 7 - 6, and not counting a bowl game this year, 8 - 4. He has a loosing record in the SEC which is his biggest problem. I hope he stays at Auburn, cleans up whatever mess the staff is in, recruits well enough to compete in the SEC and makes Auburn relevant again. He is a good man with a good family. Besides, what would the Waffle House in Auburn do if Malzahn left?

Nick Saban is now 3-1 over Gus Malzahn. At the left are the Auburn – Alabama statistics. If you are for Auburn they will make you throw up. If you are for Alabama, you will probably say…Why didn’t we do better!