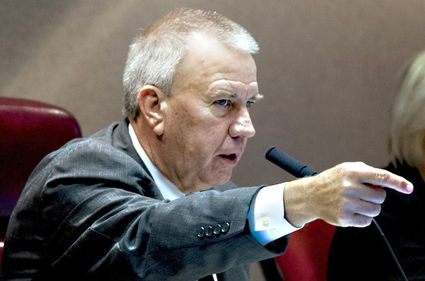 McCutcheon (R) was elected Speaker of the House during the first day of the special session of the Alabama Legislature held at the Alabama Statehouse in Montgomery, Alabama, on Monday, August 15, 2016. Speaker Mike Hubbard was ousted after convicted on ethics charges. This will be McCutcheon's first regular session.

Vital issues for our 2017 Alabama Legislature

The budgets will be the biggest problem facing lawmakers this session.

It is expected that the ongoing struggle on gambling legislation will be prominent again this session.

Gov. Bentley has indicated he will propose a plan similar to his plan last year to borrow $800 million to build four new prisons.

House to seriously consider an increase in the gasoline tax.

Increases in the cost of health insurance for education employees and state employees.

Medicaid again will be one of the areas facing a shortfall.

Republicans have had a majority since 2010.

Advisory committees on the budget will be informing lawmakers of any earmarked funds that can be reshuffled.