The Negatives of Baiting 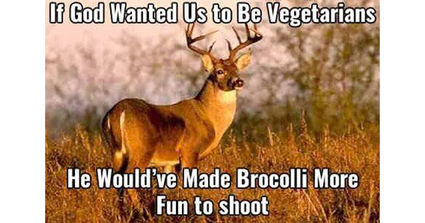 For the last five years or so, there's been a bill taking passes through the House and Senate in Alabama, and this year it's looking to come in with a little steam. The bill in question is House Bill 184, which would allow hunters to hunt both deer and feral hogs over bait. As it stands, the bill has passed the State House, and is looking to come up for consideration in the State Senate.

Personally, I'm not a fan of hunting over bait. We can currently use bait, as long as it's 100 yards away and out of sight. As someone who's been hunting deer for what feels like an eternity, simply dumping out some corn and shooting whatever comes to feed on it doesn't really seem like the kind of challenge I'd be looking for. It'd just be a massacre with no true fair chase. Of course, Fair Chase is a concept that doesn't get mentioned a lot, but more discussion on it couldn't hurt. Fair Chase is an expectation that a hunter won't do anything to give them an overwhelmingly unfair advantage over the game animal like baiting or fencing. It adds to the challenge of hunting while keeping a sort of honor code amongst hunters. Ultimately, it's a matter of personal interpretation, as it's generally just you and the hunt.

At any rate, QDMA's representative on this matter, Kip Adams, has a few solid points against this bill. I'll share them with you guys, in hopes that maybe some more discussion can be had on baiting and the consequences it can have.

For starters, Chronic Wasting Disease (CWD) is something that QDMA has taken great lengths to study and combat. CWD is an illness that deer can get that can absolutely ravage a deer population. With baiting, you're potentially bringing a lot of deer into one area, including those that might be infected. While CWD isn't prevalent down here in Alabama, should it ever rear its ugly head in our deer population, baiting would aid in its transmission from deer to deer.

According to various surveys, most hunters just plain don't like baiting. Similar surveys show that the non-hunting public isn't pleased with the idea either. Everyone's got their reasons to believe what they do, and in this case, it seems like the majority surveyed didn't care for baiting.

Speaking of hunters and baiting, legalization of baiting has shown to create both offensive and defensive baiting situations across property lines, resulting in potential conflict amongst hunters and property owners. Deer are considered the property of the state; not any one person's property. Concepts such as property lines don't matter much to deer, as they go where the food is, leaving hunters, who are legally bound by property lines, in an interesting position when baiting is added.

As for the deer themselves, they can dramatically change their travel and eating habits based on bait availability. Deer have a preference for feeding at night if they can help it, and if that feeder's out there belting out corn every few hours, you better believe they'll stop on by when it's safer for them. In fact, research has shown that legalizing baiting doesn't increase harvest rates.

Speaking of following the food, predators will key in on this set of changes as well. If the deer are constantly going to one place, you better believe the predators will as well. For those of you who've kept up with these articles over the years, you might remember the Predator-Pit Scenario, where a deer population can be decimated by a perfect storm of food availability and predation rates. Baiting has the potential to throw your local deer herd into that situation, wreaking havoc on your deer population.

Other states with legalized baiting have shown to have a dramatic 4-8 times increase in artificial food on the landscape. Of course, another impact baiting would have is the increase in nuisance animal populations, like feral hogs and raccoons. Hogs don't need much help with breeding and spreading, and raccoons are very opportunistic, finding food where ever they can, and troublesome, as they tend to leave a mess wherever they go. Hogs, of course, do the same, but on a much larger scale, as they can tear up large amounts of land with their rooting.

Ultimately, the decision on this bill lies with the State Senate. If you'd like to weigh in on it, feel free to contact your Senator and tell him or her what you think. Personally, I'm hoping it will not pass. I'll always welcome more discussion on the topic, as we can only benefit from trying to learn from one another, sharing our experiences on the subject. So get out there, keep your feeding and hunting legal, stay active, and go get'em!