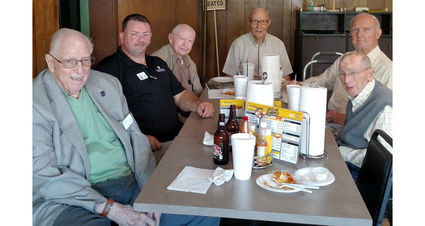 By the time our readers peruse this item, downtown Montgomery's famous Chris' Hot Dogs will have celebrated its 100th year of serving its famous hot dogs.

For many of us who earned our salaries working in the area, Chris' Hot Dogs was often a lunchtime destination.

Chris' has been a favorite eating place in Alabama's Capital City for the last century, and is likely to endure for a good many years more.

Family owned and run since May 1, 1917, Chris' has hosted presidents Franklin D. Roosevelt, and Harry S. Truman, plus the Bush's, both father and son, Elvis Presley, and Hank Williams, who was a regular diner there. Also enjoying the famous hot dogs were: Clark Gable, Oprah Winfrey, Dr. Martin Luther King, Jr., and Hank Williams, to name a few.

This year, on the 22nd of March, five residents of Elmcroft at Halcyon, and Maintenance Director Shawn Secrest, rode downtown to Dexter Avenue, where they were graciously received and enjoyed an early luncheon of Chris' famous hot dogs.

On May 1, of this year, Chris' will celebrate its 100th anniversary. Back in 1917, Christopher Anastasios Katechis migrated to the U.S. and opened his business on its present Dexter Avenue site and Montgomerians have been enjoying his famous hot dogs there ever since.

Certainly, the group of seniors who congregated there on March 22 of this year were no exception.

Over the last century, many local residents and visitors, would stop by Chris' for their lunchtime snack. And loved it.

The month of April might well be identified as "The Month of Presidents," since many of its days are celebrated as having a presidential significance, as reported on your writer's tired old computer in "The History Place." This tally includes one Confederate president (there was only one), and a baker's dozen of Union presidents; a couple of them were mentioned twice.

On April 1, 1998, the sexual harassment case against President Bill Clinton was dismissed by a federal judge in Little Rock, Arkansas.

Eviction notice was issued by Gen. Robert E. Lee, on April 2, 1865, notifying Confederate President Jefferson Davis that he must evacuate the Confederate Capitol at Richmond, Virginia.

The third day of April in 1948, was the day that President Harry S. Truman signed the "Marshall Plan." The purpose of this endeavor was two-fold: to stop the spread of Communism in Europe, and to restore the economies of countries that had been destroyed in World War II.

On April 8, 1952, Pres. Harry S. Truman seized control of America's steel mills to prevent a strike. On the 29th, a U.S. District ruled the president's act was unconstitutional. And, the strikers received a pay raise, plus other benefits.

The 9th day of April, in 1866, despite Pres. Andrew Johnson's veto of the Civil Rights Bill, the measure was passed by Congress, giving blacks the rights and privileges of U.S. citizenship.

On April 11, 1968, the Civil Rights Act was signed into law by Pres. Lyndon B. Johnson. The act prohibited housing discrimination, and expanded the rights of certain residents of this country who have been erroneously dubbed "Native" Americans. There is no such thing as a "native American."

On April 12, 1945, Americans mourned the death of President Franklin D. Roosevelt, the only U.S. President to be elected to office four times. During his presidency the U.S. citizens endured the Great Depression and World War II.

Also on April 12, Alan Shepard became the first American in space; followed a year later by Pres. John F. Kennedy's call to land a man on the moon before the decade had ended.

Back in 1743, on April 13, Thomas Jefferson was born in Virginia. Beside being the 3rd U. S. President, Jefferson was an author of the Declaration of Independence.

On the 14th of the month in 1865, President Abraham Lincoln was assassinated.

Moving ahead 121 years, also on April 14, 1986, Pres. Ronald Reagan ordered the bombing of Tripoli and Benghazi, in retaliation of a bombing of a Berlin discotheque killing 37 persons, two of whom were Americans.

Jumping back to April 23, 1791, James Buchanan, our 15th President, was born. He was the only bachelor to occupy the White House.

On the 26th of this month in 1944, federal troops in Chicago seized the offices of Montgomery Ward and removed the chairman after he had refused President Roosevelt's order to recognize the CIO labor union.

Another famous birthday that occurred on this day in April, this time it was in the year1822; that of Gen. Ulysses S. Grant, our 18th president.

Another President who enjoyed an April birth was our 5th president, James Monroe, who was born on that day in1758. His most significant achievement was the Monroe Doctrine, which closed the door on any nation wishing to extend its holdings or use its armed forces in North or South America.

And, finally, on the 30th of April 1789, George Washington became America's first president. He took the presidential oath of office on the balcony of Federal Hall in New York City. Washington, DC, was yet to come.

Finally, as we watch the daily newscasts on TV we must wonder what, of any significance, will occur in March of 2018?

The Fall Of A Great Profession

When your aging scribe first stumbled into the realm of journalism there existed a number of rigid rules to which each of us blindly adhered.

The first concerned the guide by which each reporter abided; that being an adherence to the rule of objectivity. Reporters didn't take sides. Despite one's political, religious, or whatever leanings; a news-person prepared his or her reports in an objective manner.

The second rule was one laid down in 1902 by Rudyard Kipling in his Just So Stories, and soon became gospel; for news reporters. Kipling wrote:

(They taught me all I knew);

Their names are What and Why and When

and How and Where and Who.

A third rule by which all news-persons reported was anonymity: Not until the advent of television did the pronoun I, become a part of the reportage. News reporters religiously removed themselves from the picture. It wasn't until they stepped in front of the camera did the actual existence of the chronicler become a part of the narrative. The use of the pronoun I in a newspaper narrative could bring down the wrath of the editor upon the hapless journalist. Not so today. The reporter has become an integral element in the narrative, to the extent that television reporters soon became referred to as "On air personalities." This ushered in the beginning of the end of objective news reporting.

And so, journalism has sunk deeper and deeper into a mire that has swallowed up this once proud field of news reporting and turned it into a quagmire of personality and fiction that, today, goes under the name of news reporting.

And so has news reporting sunk into a soft, muddy pool of abuses of expression; along with much of our once proud English language. We just ain't got no couth no more.

Throughout history pet owners who have tired of their animal have taken it far out in the country and dropped it off, mistakenly believing that this was the end of the story.

Usually, however, within a day or two who shows up at the back door but the unwanted critter.

And so it has been with government health care; such as the ever popular, but hopeless, Obamacare.

Some years ago Teddy Kennedy's efforts to launch a similar federal health care program caught your writer's attention. On the surface, this looked like a fine solution to a growing problem.

However, after some extensive research it became clear that national healthcare was a quagmire that the wise man avoided.

The concept of federally planned and subsidized health care was a specter one didn't really want haunting his or her house. But, try to tell that to governmental do gooders.

For one thing, there are too many factions involved in the process, each with its own point of view on how nationalized health planning should be handled. The wisest choice; however, seemed to be: leave it alone!

Look at who the major players have been:

And each proponent of how efficient health care should be managed is a health care provider: the entity responsible for handling the new system. This list of narrow focused do gooders grows with each attempt.

They bicker and argue, and in the end, nothing is accomplished. But they plod along. And, historically, none of them has succeeded-including the last President of the United States. The scenario is usually a big fanfare on how the government is going to, magically, come up with a solution to this historic problem. But when the dust settles, it's swept under the carpet until the next patron comes along and fans the flames. And at the end of their effort, they go down in flames.

For a good many years your writer studied, wrote about, and actually became a player in the health planning process, only to come to the conclusion that government-handled health care will never come to fruition. There were too many factions, each with its own objective, and often in fierce conflict with the other players, all of which spelled disaster. Yet they press on.

And so it shall be with Obamacare. The previous president, and his minions, produced Obamacare, which never really got off the ground. It consumed millions of dollars, held out false promises to many citizens in need of a well organized health care system, and eventually ended up like Franz Kafka's Hunger Artist, it just withered away because there was nothing that could be done to remedy his situation.

It makes for good theater, but there's really no hope for any of these proposals to succeed.

The human factor won't allow it.