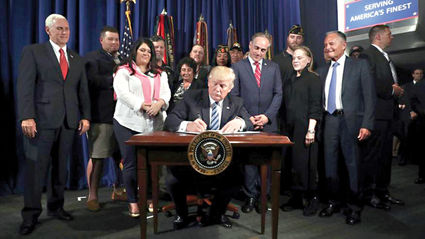 President Donald Trump signs an Executive Order on "Improving Accountability and Whistleblower Protection" at the Department of Veterans Affairs, Thursday, April 27, 2017, in Washington.

The new law expands the 2014 VA reform law by granting VA Secretary Dr. David Shulkin increased flexibility to fire, suspend, or demote any VA employee – regardless of rank – for poor performance or misconduct. The law also contains increased protections for whistleblowers who expose wrongdoing within the VA.

U.S. Representative Martha Roby (R-Ala.) was present at the White House for the bill signing and said the law brings unprecedented, long overdue accountability to the VA.

"I was honored to be at the White House as President Trump signed this historic VA reform legislation into law," Roby said. "For far too long there has been a culture of complacency at the VA, and our own Central Alabama VA became a prime example of poor performance, negligence, and even abuse. These new accountability standards and whistleblower protections will lead to better care for veterans. I appreciate the commitment President Trump and Secretary Shulkin have shown to work with Congress to enact long overdue changes at the VA."

I was honored to be on hand at the White House as President Trump signed the Department of Veterans Affairs Accountability and Whistleblower Protection Act into law. It was one of two recent developments that will bring significant improvements to veterans' services in this country.

For the last several months, Congress has been working to build upon the VA reforms we passed in the wake of the 2014 veteran wait list scandal. That law took an important step to increase accountability by making it easier to remove high ranking VA officials. However, our efforts to extend that flexibility to fire problem employees down the chain of command to rank-and-file workers were unsuccessful due to objections from the Obama Administration and the then-Democratic Majority Senate. I've always maintained that senior managers aren't the only ones responsible for misconduct at the VA. Everyone entrusted with the care of veterans should be accountable for a high standard of service and integrity.

Another improvement we've needed is protection for whistleblowers who come forward to expose wrongdoing. The brave whistleblowers who told me the truth about the misconduct and abuse at the Central Alabama VA faced serious retaliation for their efforts, and many others around the country have reported similar treatment.

The new law grants Secretary of Veterans Affairs Dr. David Shulkin increased flexibility to fire, suspend, or demote any VA employee for poor performance or misconduct. It increases protections for whistleblowers and establishes a new independent office within the VA specifically to look out for those who bring misconduct to light. Another important provision of the new law streamlines the hiring process for VA medical center directors. I personally advocated for this new authority after bureaucratic problems delayed the hiring of a new director for the Central Alabama VA for more than two years.

To be clear, most VA employees care deeply for veterans and work hard to offer the best care and service, but for too long a culture of complacency has allowed some to get away with poor performance, negligence, or misconduct. Our veterans deserve the very best care we can give them, and I believe those who depend on the VA will be better served as a result of these reforms.

Earlier this month, Secretary Shulkin announced the VA is finally modernizing its patient health record system and bringing it in line with the platform used by the Department of Defense. This is long overdue. It has never made sense to me that the VA would use a different health record system than the military. Think about a veteran who has recently returned from a deployment who has symptoms of PTSD or another battlefield injury. They need access to care right away, but too often they have trouble because the systems don't communicate properly. We hear from veterans every day who face these gaps in health care, and it is past time the problem was fixed. Congress has prioritized funding for modernizing the health record system, and I am very pleased Secretary Shulkin is using his authority to make this change.

Our new reform law and this important policy change within the Department of Veterans Affairs show that Congress and the Trump Administration are working together to turn around the VA and improve services for veterans. I appreciate President Trump and Secretary Shulkin for their commitment to working with lawmakers to put these important changes in place.

Three years after the waitlist scandal erupted in our own backyard, I remain directly engaged in pushing for improvements at the VA facilities Alabama veterans count on. Last week I met with VA Inspector General Michael Missal and his staff in my office for an update on their efforts to perform facility inspections and investigate allegations of wrongdoing. I also held my regular call with Central Alabama VA Director Dr. Linda Boyle and her team to go over various issues facing the system. On both a national and local level, the endless saga at the VA has demonstrated the importance of strong, consistent oversight. As your Representative in Congress, I intend to keep applying that oversight and I will continue to keep you updated on our progress.