There Are Some Positives With Coyotes 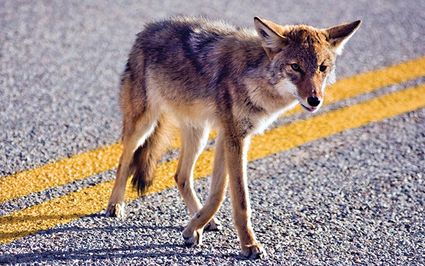 Coyotes are located all across Alabama. Seeing coyotes is becoming more common across our great state

Folks, we've talked about coyotes before, and how they impact deer herds. The pack-hunting critters are always willing to make a quick meal of a fawn or any other animal it can get a hold of, and it's starting to really show with our state's deer population. Of course, the flip side is that this is all a part of the natural order; coyotes are predators, and deer are prey. That being said, it's important to understand their place in the woods and how they live.

Coyotes are the kind of critter that hunts whenever convenient, feeding on just about whatever they can find. They're true survivors; be it grass, carrion, weak or injured animals, even cat and dog food, a coyote won't mind chowing down when it gets the opportunity. They're also highly adaptable; if you leave a food source available for them, in time, you'll attract coyotes. Of course, that includes the city, like Montgomery. We have our share of them too.

Typically, a coyote's lifespan is around three to four years, making it fairly short lived. Averaging 40 to 50 lbs, they're not incredibly threatening to us grown adults, but the odd attack has been recorded. The vast majority of contact with coyotes isn't fatal; they're in this for an easy meal, not an uphill fight, so they're not putting us humans in immediate danger, though not inviting them around you and your home is probably for the best. Make sure to keep animals and their food inside or in a protected area, where those critters can't get to them.The deer and livestock populations do face challenges from coyotes, and those of us who can should exercise good judgement in how we manage their populations.

Some of you may be thinking that the only good coyote is a dead one, but that's not the case. Ever since we pushed wolves and mountain lions out of their natural habitats in Alabama, the coyote has moved into that slot in the food chain. They're scavengers, so they'll eat anything, including carrion; nobody wants that around. They also help control various animal populations as they hunt down their prey; obviously, some don't need help with thinning, but they're still an important part of the process, so care should be taken if you decide to thin their numbers through trapping. Management is about having a plan and achieving a proper balance, so be prepared!

Aside from eating carrion, coyotes keep rodent populations down, which is a plus. Keeping carrion gone greatly helps reduce disease spread, keeping the local populations of other critters relatively healthy.

Personally, I'm no huge fan of coyotes, but as I stated above, they are part of the deal, so they won't be going anywhere anytime soon. It really does go to show how important the entire ecosystem is, from top to bottom. Everything has a place, and the coyote's is fairly important, so long as they're not overdoing it.

Naturally, if you have issues with coyotes and want some more information on what you can do, you can visit www.outdooralabama.com and check out their info on local season and bag limits. Classified as a furbearer animal, you can hunt them or trap them, during daylight hours only. There is no bag limit, nor is there a closed season. As always, make sure you have a valid hunting license before you go, and always respect state laws and rules on hunting!

As for me, I've popped a coyote or two in my time, but they're pretty hard to find just sitting up in a tree. The slick little devils are pretty good at avoiding unwanted contact, if they want to. Of course, if they get used to being around humans, it's another story. Being such great survivors and adaptation specialists, they'll move right into a neighborhood, even in a city like Montgomery! I know I've heard them at night from time to time, which doesn't surprise me at all.

I hope all of you are enjoying this lovely month of June, and I look forward to hearing from all of you about your late spring shenanigans out in the woods. And be careful out there; snakes are out there, doing what they do best. So get out there, get some fishing done, some lake fun, and go get'em!