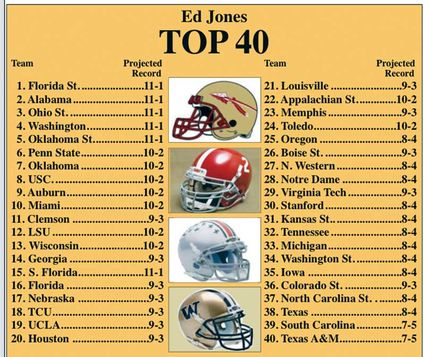 Picking the top football teams in the country for the 2017 season was very difficult. There are more good teams this year than in other years it seems.

There will be more ten win seasons this year than ever as far as my calculations are concerned. It is my belief that there will also be no undefeated teams as we end the regular season. The Alabama - Florida State game on September 2nd in Atlanta will not determine who wins the national championship, but it will give the winner a little cushion for the rest of the season.

Florida State, Alabama, Ohio State, Washington, Penn State and Oklahoma State have the best chance to fill the top four spots of the final College Football Play Off Ranking in December. However, a team from anywhere in the top fifteen could get hot and knock some of these teams out. That is why college football is so popular. The play off system has certainly raised the interest level for the sport.

In the NFL it is probable that a team with four or five losses could win their division, win their conference championship and play in the Super Bowl. In college, two losses will almost always knock a team out of contention. Of course the NFL season is decided over a sixteen game schedule where the college game is determined over a twelve game schedule

unless a team agrees to play Hawaii. Then

When my interest peaked regarding the pre-season polls there was only the Associated Press Poll (AP) and the United Press International Poll (UPI). Now there are dozens of polls that come out, some as early as July. The UPI Poll was replaced by the Amway Coaches Poll. None are really scientific even though some polls refer to their "nine sets of indicators" calling for a team to win so many games.

My top forty teams are based on their record, their strength of schedule, the strength of their opponents schedule and to some degree on the history of the teams, and the history of their coach. In order to get myself off the hook when my top forty does not perform well, I call my picks "projections" instead of predictions. It works. It is my desire that you look at my poll, compare it to your favorite poll and have fun taking pot shots at me in December.

Tee it up boys. It's gonna' be a long three months.

MAY YOUR FAVORITE TEAM