Bow Season has already started for all of Alabama 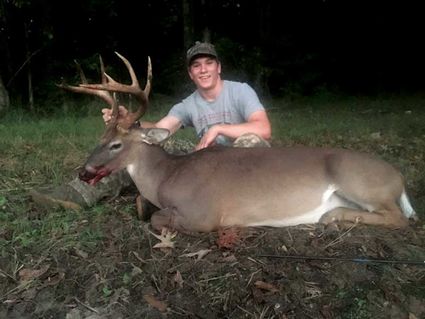 As you read this, Bow Season has already started for all of Alabama. Despite the rough weather we've had in recent weeks, I've seen quite a few deer out and about, later in the evening. So take heart, Bow Hunters; they'reout there!

If setting up trail cameras is a part of your pre-season scouting efforts, they can really pay off when setting yourself up for bow hunting. While there is no such thing as a guarantee when it comes to placing a buck, you can get a fair idea of where the deer are coming and going from in certain areas. Set yourself up accordingly!

Another weapon in the bow hunter's arsenal is scent control. Deer rely heavily on all of their senses to anticipate and survive potential ambushes, and smell can be the game changer. A good, clean, and ethical shot isn't any further than 30 yards, so you're definitely going to be within smelling distance of that buck. Between scentlok camo, wind direction, and what kind of detergent you use, you can eliminate a lot of early warning signs for deer that danger is near.

Speaking of detergent, be careful with your choice there. Laundry detergent that brightens colors actually increases how much Ultraviolet, or UV light, is coming off of the clothing. While we can't really see it, you better believe that deer can! If you're ever interested, throw a little detergent under a blacklight, and you'll see what I mean. You'll be lit up like a Christmas Tree as far as deer are

concerned. As far as sight goes, the only other advice I can give is practice being at half draw on your bow from time to time, as movement is your greatest enemy when hunting deer. If that trophy decides to stare you down at half draw, you might be stuck a while.

Of course, sound is another issue for hunters. It may be obvious, but be sure to keep accessories like keys, calls, and other items properly secured. As you may have to make an odd adjustment while setting up your shot, you don't want to clang anything against your stand! Keep your cell phone on silent as well, unless you're expecting an emergency call. Honestly, if you can get away with turning it off entirely, you should. One of the charms of being in the outdoors is to leave all of that stuff behind, after all.

Ultimately, discipline is our greatest weapon, so practice and preparation are key for success. Even though there's only so much you can do before the hunt, every bit of it is needed to just let that deer get close enough.

Now, camoflauge is pretty darn important for bow hunting. While color isn't as huge of a deal for deer hunting, pattern is absolutely essential. Solid patterns aren't great, as they don't blend in, so tree based camo is your best bet. There's a pretty huge selection for types and brand of camo out there, but I can give a good recommendation for Bald Cypress Camo. Give them a look online sometime!

The season is in its early stages, so I'm eager to hear from you folks about what all you're hearing and seeing. If you keep some of those tips in mind, you might be able to brag about another trophy buck! So study up, get practiced and prepped, and go get em!