Can you make a "case" for celebrating Christmas on December 25th? 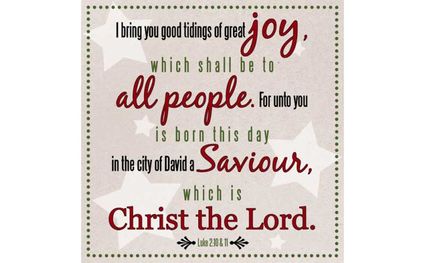 The Bible does not tell us the date of Jesus's birth nor does it tell us to celebrate His birth. A celebration of Jesus's resurrection following His death on the cross is a more appropriate celebration for Christians than His birth. That is because Jesus' resurrection from the dead is the proof of the deity of the Son and the real hope for those that believe on Him that their soul will reside with God forever.

Society however would much rather celebrate a birth rather than a death. I remember when my son was born. Looking at this innocent, beautiful child and thinking about how all possibilities were open for him. My mother and father-in law waited outside as he was born and was able to see him minutes after that miracle had come to fruition. Looking at the way my father-in-law held him, I believed he was quietly thanking God and praying for what his life would be. My brother, wife's grandmother and several friends came to visit while my son and wife were still in the hospital. The day after we brought my son home, my parents, my sister and my wife's aunt and uncle came to visit. It was a celebration of a new life and the hope that goes along with it.

While the deaths in the family have been a celebration knowing that our family members are now free from the afflictions of the body and reside without pain in Heaven, we still grieve at their death and the loss of the earthly relationship.

To your question, can I make a case for celebrating Christmas on December 25th? Maybe, number one since we don't know the exact day and number two if you think about God's gift to mankind that God the Son would reside in an earthly body and walk among us, then the date is not really relevant. There are several theories and possibilities.

It seems that pagans of various cultures such as the Egyptians and barbarians of northern and western Europe celebrated births and had various celebrations in or around December 25th. While there is suggestion of Christmas celebration as early as the third century, it seems that Constantine first made Christmas official. While some celebrated Christmas on December 25th, others (I understand the Armenians still do) celebrate Christmas on January 6th. January 6th is supposed to also coincide with the Feast of the Epiphany, being that day in which the magi came to see Christ and is said to have been His introduction to gentiles. There is also the theory that Jesus was conceived and crucified on the same day of the same month, placing His birth on (or about) December 25th. Some writers seem to be hesitant about considering sheep in the fields in December in that it would be too cold. In looking at expected temperatures for Bethlehem this year it does not seem that it should get any cooler than about 45 degrees F.

To me, if you really want the best clues to the birth of Jesus. I think you have to consider the birth of His cousin, John the Baptist. Zechariah was a priest and of the division of Abijah. Within that division the priests were chosen by lot to burn incense in the temple. With knowledge of when other divisions served it is believed that Zechariah served during the last week of Passover. Zechariah encountered an angel while in the temple. He was told that his prayers had been heard and that he would have a son. Zechariah was frightened and replied that he and his wife were very old. The angel told Zechariah more about who his son would be and that because of his unbelief he would be unable to speak until the baby to be named John was born. Further reading in the Bible shows an encounter between John's mother, Elizabeth and Mary the mother of Jesus in the sixth month of Elisabeth's pregnancy. Zechariah was told that John would be filled with the Spirit even in the womb and it was evident when John jumped in Elisabeth's womb when she encountered Mary who had recently become pregnant with Jesus. Extrapolating out nine months from that time puts Jesus' birth at the end of September, which also coincides with the Jewish

Festival of Booths or Tabernacles. There are other times that Zechariah could have served in the temple but many writers seem to favor service of the division of Abijah during Passover.

Regardless, I hope that in your celebration of the Christmas season that it will focus on Christ and remember that "for God so loved the world that He gave His only begotten son, . . . ". I hope that each of you have a blessed Christmas or to my friends of the Jewish faith a Happy Hanukkah.

This article is informative only and not meant to be all inclusive. Additionally this article does not serve as legal advice to the reader and does not constitute an attorney- client relationship. The reader should seek counsel from their attorney should any questions exist."No representation is made that the quality of legal services performed is greater than the quality of legal services performed by other lawyers."