Bow Season ... tracking a deer after it's been stuck with an arrow. 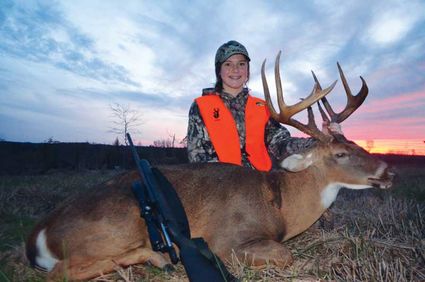 This month, I want to talk about how to anticipate tracking a deer after it's been stuck with an arrow. There are some tell-tale signs to keep an eye out for when the arrow hits that can give you a good idea of where you hit it and how long you need to wait before tracking it. Of course, I can right out tell you that shots to the head and neck aren't really what you want. Sure, they're pretty vital, but with all the bone, skin, muscle, and fur in the way, you're more likely than not just going to give that buck the shave of a lifetime and not a spot on the wall. Your main target is just behind the shoulder, where the heart is. A true shot through the heart will typically have that deer give a mule-kick, followed by a rather short meeting with the ground. In the rare case that the deer scampers off, and you're not sure where you tagged it, if the blood is a bright, almost pinkish color with some slight bubbling, you can bet that whitetail isn't too far off. The bubbling, for the curious, is from the arrow clipping the lungs, as it's pretty hard to shoot the heart without getting a bit of a lung shot.

Now, if you've ever been out there hunting deer, you know as well as I do that those animals rarely ever give you a good, clean, broadsided shot. Typically, you'll make do with the best shot you can get, so it pays to note what the deer does when it's hit, as well as what kind of blood trail you're looking at. Let's say you tag that buck in the spine. Odds are, with the thick bones and everything else, your arrow is going to break. However, a spine shot means that buck isn't going anywhere, but you'll need another shot to deliver that buck from its misery. Don't wait.

If you tag it in the gut, you're in for a long night. That sucker will take a few short steps, arch its back, tuck its tail right in tight, and slowly walk or trot out of the field before bedding down somewhere nearby. You want to take your time before trailing this deer, as a gut shot will normally be fatal, but not quick. If you push after that deer too quick and too soon, it'll get up and run off before bedding down again, making locating it far, far more difficult. Your arrow will have flecks of brown and green on it as well as blood, and you'll definitely know if it's a gut shot from the smell. Try to avoid this one as much as possible!

If you tag it in the liver, that deer is done for. However, like a gut shot, it will take some time before you'll safely be able to approach; 3-5 hours is probably a good rule to follow. Your arrow will be covered in a very, very dark red blood, with a good start to the trail as it slowly fades out. Liver shot deer can go anywhere from 200 yards to a quarter mile before bedding down. As for the initial hit, just like a lung shot, the deer will more than likely trot off a little bit, or maybe just walk. Unlike the lung hit, where the deer will shortly fall over, a liver shot deer will take time to find a good place to rest. Just be patient and be ready.

Of course, while aiming for the heart is optimal in all situations, if you pull too far over, you'll smack that arrow against the foreleg of the deer, right into the scapula, which, unfortunately for you, is designed to protect the deer's vitals. If you pull back towards the heart and vitals, you'll have meat in the freezer for sure, so hope, pray, and aim well, that your shot goes away from the bone. If you think the shot was high, up into the shoulder and bone, don't wait. Get down there and get ready to finish the job. If you're sure you nailed the vitals, then the wait is just a few minutes; a wounded animal is always dangerous to approach, so please be careful when approaching.

All that being said, we're gearing up for some gun hunting, so let's talk about deer roaming habits. As most of you know, the big old bucks don't get that way by being dumb, and every researcher worth his or her salt knows it too. Naturally, they're working hard to get to the bottom of those big bad bucks' mysteries, and our wildlife biologists and researchers have turned to the latest in gadgets and tech to help reveal just where that trophy's been hiding. Of course, I'm talking about GPS collars.

After tagging a buck with a collar, biologists can check up on their subjects through the Eye in the Sky, letting us know just what a buck does with his day. As it turns out, from multiple studies performed across the United States, they do a whole lot of waiting. Most bucks seem to stay right smack in whatever area they can find that's chock full of cover and food. Clearcuts with plenty of browse are a favorite, and they will stay in them all day, every day. Most studies have shown bucks will only leave well after hunting hours are over; we're talking 3 in the morning! Now, as the weather cools off, browse gets sparse, and the rut starts cranking up, those big boys will start to wander out of their comfort zone a bit more often. If you're a bowhunter, early season, you'll want to find a good thick-growth area with lots of protection, and try your darnedest to sneak up alongside it without getting caught. You might find yourself with a good story and a better trophy.

As gun season rolls around, stay patient; the big boys don't head out of their homes without good reason, so finding a buck in broad daylight is more or less like hitting the lottery. Be patient and resist the urge to leave the stand early. After the rut kicks in, all bets are off, as those lover boys aren't as concerned about safety as they are about those does.

Another thing to remember is that pressure will push deer off of their daily routine faster than anything else. GPS collars have shown that deer will adjust the same day they sense a hunter moving into an area, in as little as 12 hours. The average time for them to head back to an area with pressure is about 3 days, it seems. Keep your presence minimal and your impact light, or you might not get what you came for!

All in all, there's a whole lot more to go over, but we're already here at the start of the season. I hope all of you have prepared well and scouted out ahead of time, and I also hope all of you bow hunters managed to get a good story, if not a great trophy. So get out there, grab your camo and your ammo, get your Game Check ready, and go get'em!