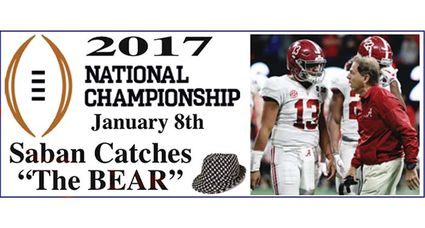 Nick Saban may have done the best coaching job of his career at Mercedes-Benz Stadium in Atlanta on the night of January 8, 2018. Trailing for the entire game, Saban made a tough decision at halftime down 13-0. He pulled Jalen Hurts and started Tua Tagnovailoa in the second half. Hurts has been the quarterback for 25 wins and only two losses in two years. However, those losses were devastating. One was in the national championship game last year against Clemson. The other was to in-state nemeses Auburn in the last regular season game.

It was painfully obvious that in order for Alabama to overcome a terrible first half, they would have to throw the football more. Enter, Tua Tagovailoa. He has always been a better passer than the multi-talented Jalen Hurts. Why Saban has not played Tua more is a mystery to me. It is always best to play only your best quarterback. But, if your best is a runner and the second best is a runner and a passer, playing two quarterbacks can be very effective. Maybe, Nick Saban is so smart that he was waiting until the national championship game to go to his “second best”. Don’t count on that. Alabama was in a desperate situation, so desperate measures would be required. Still, it took a lot of intestinal fortitude to make the decision to replace a proven winner with an unproven freshman who had not attempted a pass against a Division I team since October.

As a coach, you are never sure that your decisions will be rewarded. You just have to go with your gut feeling. That gut feeling in Saban’s mind ultimately won the game for Alabama and enshrined Nick Saban into the legend category for good. His six national championships in a span of fifteen years will never be duplicated. This feat is unprecedented in the history of college football. He finally caught “The Bear”.

Georgia actually won the battle and lost the war as freshman quarterback Jake Fromm completed 16 of 32 passes for 232 yards, making key plays on third downs most of the game. The Dawgs ran the ball 45 times for 133 yards, thereby, keeping the ball away from Alabama. The game was Georgia’s for 3 1/2 quarters. Alabama only had the ball for 26.2 minutes. That was just enough time for Tua to bring the Tide back over and over again. Finally, Alabama tied the game at 20-20 with a pass to Calvin Ridley, a top 10 projection in the spring NFL draft.

Time left was 3:49. Alabama stopped Georgia on their possession and Tua started driving the football, running and throwing to get in position for a field goal to win the game. He masterfully guided the offense to the 19 yard line as time was running out. Saban called a time out with 3 seconds on the clock and trotted Andy Pappanastos out on the field for a sure 36 yard field goal. Not so sure! Pappanastos pulled the ball badly left for a heartbreaking end to his college football career. Overtime favored Georgia because the ball starts on Alabama’s 25 yard line. Two first downs with Sony Michel and Nick Chubb, the best running back tandem in the country, will give Georgia either a first down inside the 3 yard line or a touchdown. All these two backs would have to do is gain 3 yards per carry and Georgia wins. There were more heroics to come, but without the unbelievable defensive stand by Jeremy Pruitt’s defense, it would have been difficult for Alabama to match the touchdown. The Georgia field goal made the score 23-20 giving Alabama a shot at winning. That is exactly what Tua did. When he lost 15 yards on a sack, Coach Saban became unglued. You never take a sack like that. Throw the ball away and live to fight another day. A field goal from this range would be a fifty-six yard try. Alabama loses. Not so! Unfazed, Tua dropped back, looked off the safety on the left and threw a 41 yard strike to freshman wide receiver DeVonta Smith. Game over in one overtime. Alabama 26-23!

Kirby Smart is probably still kicking himself for the decision in the fourth quarter to slow the game down, run time off the clock, and deny Alabama time to score enough to win. This one decision probably cost Georgia the national championship. One more score of any kind and Georgia wins. It was a game for the ages. Alabama aged well. Saban and The Bear are at the pinnacle of college football