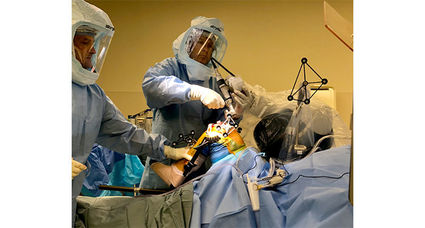 Knee replacement is performed approximately 700,000 times per year in the United States. The history of knee replacement has been one of steady technological improvements, and the latest innovation has now come to Montgomery.

While traditional knee replacement has been very successful in improving quality of life, studies have shown that robotic arm knee replacement is over three times more precise than manual methods and has reduced incorrect alignment by a factor of more than three.

According to Dr. Roland Hester of Southern Orthopaedic Surgeons, traditional methods remove the arthritis and shape the bone for the implant, then the surgeon must release tight tissues until the knee has similar tenson in flexion and extension and from side to side. While a variety of methods can assist in balancing the cuts and soft tissue releases, in the end the surgeon works until the knee look and feels right. While surgeons become very skilled at this method, there is some variablity in outcomes. Using the Mako robotic arm system, a CT scan of the knee is performed, and a computerized, virtual 3D image of the knee is made. Prior to surgery, the surgeon then is able to place the components on the model and make adjustments on the computer to achieve the desired alignment and balance. In surgery, a visual array system is then attached to the knee, the knee is mapped out, and this mapping is matched to the CT scan on the computer. The knee is tested and the system tells the surgeon exactly how the knee will perform if components are implanted as planned. Components are then adjusted on the virtual 3D image until position is optimal. The exact position is determined prior to any cutting of bone. The desired position is loaded onto the

computer and robotic arm, and the surgeon guides the robotic arm to cut exactly as planned. Because most of the knee balancing can be done by adjusting component positions, less soft tissue cutting is done, which allows less trauma to the knee. The robotic arm also automatically stops if it gets out of the planned zone, which adds a significant extra level of safety to the procedure.

"The precision of the system has been pretty amazing," says Dr. Jason Randall. "I have been very impressed with the system. It has greatly improved our ability to give our patients the best possible knee." Dr. Brock Howell stated that studies show that well aligned implants perform better, and this system optimizes implant alignment.