How Can California Divide Itself Into Three Separate States? 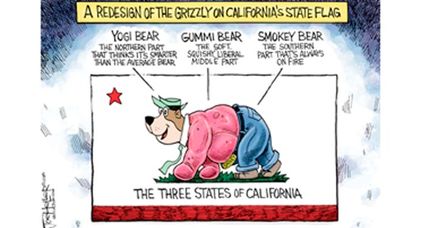 The state of California has a larger economy than many countries and is the most populous state within the United States. Many in California think differently from those of us in Alabama with resultant taxes and the cost of living being significantly higher, in case of taxes by design of it's legislators. Even so, within California there are different schools of thought and that is somewhat evident by the current number of Californians leaving to settle in other states which has California losing more residents than those that move in.

A gentleman by the name of Tim Draper began the division proposition of California into six states and has now narrowed it down into three states. There are now enough signatures to place the proposition on the ballot in November.

1: New States may be admitted by the Congress into this Union; but no new State shall be formed or erected within the Jurisdiction of any other State; nor any State be formed by the Junction of two or more States, or Parts of States, without the Consent of the Legislatures of the States concerned as well as of the Congress.

So what would the process be for a division of California? After an affirmative vote by the citizens of California it would be considered by California legislature, the California Supreme Court and then Federal and even the Supreme Court of the United States. If the division was successful then there would be two Senators from each of the three states, assuming those Senators then in office would

occupy seats in their respective states. Because House representation is based on population there may be some change in House membership since populations would shift even though they would grossly be unchanged.

Should the vote pass and as well in the California legislature and California Supreme Court I would think there would be opposition by most or all Republican Senate and House members. But at this point while I cannot look into a crystal ball and foresee the thinking of the United States Supreme Court. I think the allowance of separation of statehood of California would be a dangerous precedence to other states. What if the state of Huntsville (Alabama) were to come to exist? While it would be a relatively affluent and conservative state, it would definitely damage the economy of Alabama and I can see the possibility of some areas of other states that feel they bear a greater economic burden or simply have a very different way of thinking wanting to break away as well.