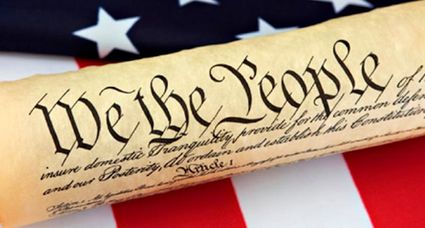 is an iconic symbol of American independence, located in Philadelphia,Pennsylvania. Once placed in the steeple of the Pennsylvania State House (now renamed Independence Hall), the bell today is located in the Liberty Bell Center in Independence National Historical Park. The bell was commissioned in 1752 by the PennsylvaniaProvincial Assembly from the London firm of Lester and Pack (known subsequently as the White-chapel Bell Foundry), and was cast with the lettering "Proclaim LIBERTY Throughout all the Land unto all the Inhabitants Thereof", a Biblical reference from the Book of Leviticus (25:10). The bell first cracked when rung after its arrival in Philadelphia, and was twice recast by local workmen John Pass and John Stow, whose last names appear on the bell. In its early years the bell was used to summon lawmakers to legislative sessions and to alert citizens about public meetings and proclamations.

From Wikipedia, the free encyclopedia.

Almighty God, who has given us this good heritage, we humbly beseech Thee that we may always prove ourselves people mindful of Thy favor and glad to do

Thy will. Bless our land with honorable industry, sound learning and pure manners. Save us from violence, discord, and confusion; from pride and arrogance, and from every evil way. Defend our liberties and fashion into one united people the multitudes brought out of many kindreds and tongues. Endow with the spirit of wisdom those who in Thy name we entrust the authority of government, that there may be peace and justice at home, and that through obedience to thy Law, we may show forth

Thy praise among the nations of the earth. In the time of prosperity, fill our hearts with thankfulness, and in the day of trouble, suffer not our trust in Thee to fail. Amen

Pray this prayer by George Washington for our nation.

A double minded man is unstable in all his ways. James 1: 8 KJV

Their loyalty is divided between God and the world,

and they are unstable in everything they do. James 1: 8 NLT