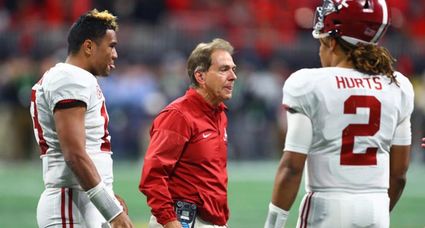 For the last seventy years, my attention has been on the game of football, especially college football. To my knowledge, during this time, never has there been such an obsession with who the quarterback will be at Alabama for the 2018 football season. Alabama fans are apoplectic. Some are actually being counseled for this unusual disorder. A number of sports writers in the state are providing fodder for this addictive behavior. What makes the quarterback situation at Alabama so puzzling is that there is almost always a quarterback controversy at Alabama as well as many other college football teams every year. The following few paragraphs will try to expose the folly of having apoplexy over the situation at Alabama.

It has been said that Alabama has a "quarterback problem." In the three encounters that I have had with Coach Nick Saban, he seemed to be capable of handling any problem that might come up. Before he had ever coached a down at Alabama, he graciously filled in for the fired Coach Mike Shula. Shula had agreed to be our banquet night speaker at the Montgomery Quarterback Club. Banquet night is the last and most important meeting of "The Club" each year. Awards are given to high school and college players for their performance during the season. The media is "all ears" and "all eyes" for this banquet because we usually have an important personality at this meeting. Radio, TV, nor The Montgomery Advertiser can be found during the normal meetings during the year. Our budget is such that we can only spend between $500 - $1,000 for each speaker with few exceptions. After the dinner, normally the speaker will take questions when his presentation is concluded. The first question was from me that night. I asked him if he would require his players to wear the same colored socks. He look at me menacingly and said, "Are you telling me that the players at Alabama have been wearing different colored socks? I answered, "Yes coach, some wear white socks, some wear black socks, and on rare occasions red. He countered, "That won't be a problem. Next question."

So far there has been only one player during the Saban years to break this tradition. That was Jalen Hurts, who wore a solid crimson stocking on his left leg through the entire 2017 season. He also wore a "medusa" style hairdo for two years. After the freshman from Hawaii Tua Tagovailoa pulled out the championship game last year in which Hurts had been ineffective, Hurts cut his hairdo.

It is my opinion that Coach Saban will choose to play both Tagovailoa and Hurts. There is an old axion in football that says "if you have two quarterbacks, you don't have any." Someone made that up who never had two great quarterbacks. In my short coaching career, we were lucky to have 3/4 of a quarterback. Alabama has the best "problem" that they have had since Saban became coach in 2007. There is no controversy at quarterback. He will make the right decision. If I were in his shoes, I would recommend making it right with the two quarterbacks so that he can play both. If one has a "hot hand" in a tight game, let him go. Don't forget that Jalen Hurts, as a freshman, won the national championship for Alabama in 2016. With time running out and Alabama trailing Clemson, he scrambled for a thirty-five yard touchdown giving Alabama the lead, with only two minutes left on the clock. With Alabama's vaunted defense, game over? No, the defense allowed Deshawn Watson to drive the field and complete a short out route in the end zone with six seconds left. A field goal would not have won it for Clemson. Alabama's defense lost that game and not Jalen Hurts.

Now, let's look at some other teams who are having this same struggle, not knowing which quarterback they will eventually go with. Clemson comes to mind first. The Clemson fans are not the least bit interested in who the quarterback will be at Alabama. A large part of the football fans along the Southeastern Seaboard, especially the state of South Carolina, are beginning to act like Alabama fans.

There is much consternation among these fans over who Clemson's quarterback will be. Kelly Bryant took Clemson to its second straight play-off following in the footsteps of Deshawn Watson, who edged Alabama in 2016. The 2017 play-off game did not go so well for Clemson. Alabama had their way with the Tigers in the semi-final game. How does Coach Dabo Swinney bench Kelly for a hot shot freshman, who incidentally has already caused two Clemson quarterbacks to transfer? True freshman Trevor Lawrence (6-5, 210 lbs.) has the ability to start at 90% of D-I schools. His best assets are his arm strength and maturity. With the latest success of the Clemson program under Swinny, the Clemson fan base is becoming as fanatical as Alabama's. The majority of the fans want Coach Swinney to kick Bryant down the road and start Lawrence. Does this sound familiar? This is just as big of a deal in South Carolina as Alabama's fan base wanting Saban to go with the Hawaiian Heisman candidate, Tua. Can you believe that some publications have placed Tagovailoa as high as fifth in the pre-season Heisman poll for 2018? He has never started a game!

Georgia really has a "bad" situation. Jake Fromm (6-2, 225 lbs.) led the Bulldogs to the national title game last year as a freshman. He did it with the flair of a veteran. How can Coach Kirby Smart kick Fromm to the side for the "new kid on the block," who is even more heralded than was Fromm? Fromm "almost" led Georgia to the national championship last year. But, he didn't win it. So Georgia fans are all excited about this new guy who could finish the job. Incoming freshmen, Justin Fields (6-3, 225 lbs), is the fan favorite to take Georgia all the way to the "promise land" this year. This is the same battle that is going on at Alabama and Clemson. "Big shot" alums are in Kirby's ear about making the change. Does this sound familiar?

Tennessee has its own controversy going on. The difference in Tennessee and Alabama is that the Vols may improve in 2018 and still finish 5-7. But, the demise of the excitable Butch Jones has brought hope to Tennessee.  Jones was uprooted by Saban disciple, Jeremy Pruitt, who was the Tide's defensive coordinator in 2017. Unrealistic expectations have gotten the fan base believing that the "Glory" of Tennessee football is just over the rainbow. However, Coach Pruitt must decide if he can go with sophomore Jarrett Guarantano (6-4, 210 lbs.), called the quarterback of the future in his freshman year. Or should he please the fans and look elsewhere. Last year Guarantano took a beating, but he showed signs of "greatness" even though he only started seven games in 2017.  Of course, Tom Brady, would have looked bad playing behind the Tennessee offensive line last year. A graduate transfer from Stanford has brought new enthusiasm and new controversy. Keller Chryst, who was 11-2 as a starter at Stanford, has the Volunteer fan base frothing at the mouth with the possibility of benching last year's starter in favor of the new guy. Although, neither quarterback could start at Alabama, Clemson or Georgia, the money makers in Knoxville are hyped up for a change. They see that Tennessee football can become Tennessee football once again. They are hyperventilating over the Tennessee quarterback situation. However, they are probably a slight bit interested in what is going on in Tuscaloosa. Tennessee will be fighting for nothing but pride this year, but they will be fighting!

Unlike Alabama, Clemson, Georgia and Tennessee, the situation in An Arbor, Michigan is becoming what I would describe as "reverse enthusiasm." Jim Harbough, an outstanding Michigan quarterback in his own right, was lured by the right price for seemingly the right situation. Alma Mater Michigan has gone through coaches like shoppers through a supermarket. The team with the most wins by any college football team in history was floundering under its own notoriety. Favorite son, Jim Harbough, was supposed to ride to the rescue under a wave of enthusiasm and a fat contract. He was a "Michigan Man", whatever that is. His first three years have been marred by close losses to Ohio State and Michigan State among many other losses. Coach Harbough is winning, but not enough for the Maize and Blue alumni and fans, of which Michigan has millions. The powers that be did not expect this from the vociferous and publicity hunting Jim Harbough.

Talk about a quarterback controversy, going into Harbough's fourth season at Michigan, it has become apparent to his base that he is simply human after all. Michigan will have to beat Ohio State and Michigan State this year or the weary fans of "mighty" Michigan could be calling for a fresh start with another coach. "The Quarterback" has not been able to recruit a quarterback that can win at Michigan. So, what does Harbough do? He borrows one from Ole Miss. Shea Patterson was an excellent quarterback at Ole Miss, but decided to take a graduate transfer to Michigan. One reason was that there is "trouble in river city" at Ole Miss. On the surface, this looks like a good marriage. Harbough needed a quarterback and Patterson needed a place to play where he would be more exposed to NFL scouts. Shea will be competing with Brandon Peters and Dylan McCaffery. You've heard of them. Well, it looks like Jim Harbough is going down or up with a graduate transfer. Patterson my be the piece of the puzzle that he needs. Michigan has been good defensively under Harbough. With a good football player at quarterback, the Wolverines may just go to the Rose Bowl this year. Unlike most people, I hope that they do!

Back to the original question. Does Coach Nich Saban start a quarterback who has only lost one game in two years? I can not "credit" Jalen Hurts with the loss to Clemson in the 2016 national championship game. I put that on the defense. Or, does Coach Saban roll the dice with a guy who has never started a college football game? That's it, other than mop up duty. Tua has played one half of football in a critical situation. Even so, he did look like the incarnation of Kenny Stabler. Or, do you take the money plan by playing both. If it is your business, what would you do?

The interesting thing to me about this "monumental controversy" at Alabama, Nick Saban can't make a bad decision!