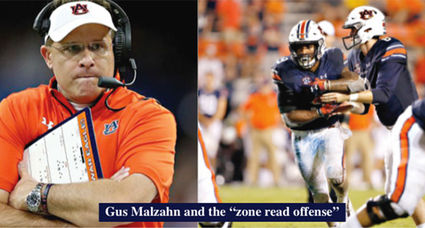 There has been a resistance on my part to address my concerns about the Auburn football program under Gus Malzahn. One of the reasons for that is my belief that he is a good man with a good family. He has the best interests of his players foremost in his program. Malzahn has done well in recruiting, flirting with the top 10 each year. He has worked diligently and tirelessly to take the Auburn football program to the heights desired by the alumni, the fan base, former players and the administration. In addition, any multi-millionaire who eats at the Waffle House is my kind of guy. Unfortunately, last spring, Malzahn was given the keys to a Maserati, but only has a license to drive an F-150 Ford pickup truck. This is not his fault. Look higher up!

I had never heard of Gus Malzahn until Gene Chizik hired him as his offensive coordinator in 2009. That worked out very well. It bothers me to hear people say that the reason that Malzahn is where he is now is because he is just a high school coach. What does this have to do with the problem at Auburn. Many high school coaches have had successful careers in college. Some have even had success in the National Football League. Paul Brown founded and coached the Cleveland Browns for many years. Nobody ever called him just a high school coach. However, he was a good high school coach. More recently, Bill Clark, the coach at UAB has been magnificent with a program that should not even be playing Division I football. He will get a better job sometime in the near future. He was a high school coach at Prattville before he was hired as an assistant at Jacksonville State. He did such a good job there that they hired him as their head coach. He did a great job with Jacksonville State. It is a Division I-AA program that has perennially been in contention for the DI-AA national championship. He parlayed that job into the D-I job that he now has at UAB. I have never heard anybody call Bill Clark "just a high school coach."

Coaches that have the "it" factor can coach in junior high school, high school, college or professionally. What is this "it" factor? Nobody can define it but they know it when they see it. I was personally in favor of hiring Gus Malzahn at Auburn in 2013. His offense had taken Auburn to offensive heights that we have never seen as Gene Chiziks offensive coordinator in 2009, 2010, 2011. His offense kept Auburn in every game. The defense was impotent at best. Chizik was supposed to be a defensive "genius" and in came Malzahn as an offensive "genius." How could Auburn be in better hands. Malzahn was a genius in running the "zone read offense." He had been developing his version at two high schools in Arkansas and was extremely successful in doing so. His teams were in the hunt for the Arkansas State Championship every year. Sometimes he won it.

Gus Malzahn's fortunes turned on the hapenstance that he had the number one high school quarterback in Arkansas and one of the best wide receivers as well. Some of the power brokers in Arkansas decided that they could get those two players to come to Arkansas if they hired Malzahn as Houston Nutt's offensive coordinator. I have spoken with Houston at length and it is my belief that this was not Coach Nutt's decision. But, he lived with it. The quarterbacks name was Mitch Mustain. The receiver's name I do not remember. This arrangement did not go well. Nutt and Malzahn were just not on the same page. Arkansas had probably the two best backs in the country. But, they could not take advantage of these two backs while running the zone read offense with Malzahn. There were natural disagreements on how to implement the use of these backs. Mustain played some as a freshmen, but the controversy resulted in Nutt firing Malzahn. Mustain transferred to USC never to be heard from again. Shortly thereafter Arkansas fired Nutt.

The University of Tulsa hired Malzahn as the offensive coordinator and that worked out very well for Tulsa and Malzahn. For two years Tulsa had winning seasons with two different quarterbacks in the top five in total yards gained. He had two quarterbacks to exceed all expectations, one that he inherited and one that he developed. This was not ordinary. It was very impressive. Enter, Gene Chizik at the end of Auburn's 2008 season.

It is not that Coach Malzahn does not know how to coach college football. The problem has been that he was basically a "one trick pony." He was the best zone read offensive coach in America at the time of his hiring. He confused every coach that Auburn played and took the Tigers to the national championship game in his first year, 2013. It was not Auburn's offense that failed in the championship game against Florida State. It was defensive coordinator Ellis Johnson's defense that failed the Tigers. The decision was made to go to the "prevent defense" with 1:30 left on the game clock. A field goal could not win it. FSU had to have a touchdown. They got it with 13 seconds left on the clock. One sack during that drive would have won the game for Auburn. But, Auburn chose to defend instead of attack. That is a defensive coordinator's recommendation. It is a head coach's decision. Even so, Malzahn seemed to have what it would take at Auburn. In 2014, Auburn had as much talent as they did in 2013. But, Nick Saban, Les Miles and others had begun to figure out this Auburn zone read offense of Malzahn. Even so, Auburn came very close to repeating the success of the previous year. However, at mid-season, the "Gus Bus" ran off the road in the closing minutes of a loss at home to Texas A&M. Auburn had first and goal from the A&M three yard line with very little time left. A touchdown for Auburn would win the game and put Auburn on the way to a showdown with Alabama to see who would go to the SEC Championship game. More about this later.

At the insistence of Coach Bill Joiner, we installed the wishbone offense at Lanier in 1971. The quarterback had to take the ball, stick it in the fullback's belly and at the same time read how the defensive tackle reacted. The tackle would be unblocked, thereby giving the offense an extra blocker. If the tackle made a play for the fullback, the quarterback was to pull the ball and run an

option off the defensive end. If the tackle did not take the full back, the quarterback wash to leave the ball in the fullbacks hands. Sounds simple? It really was except for one thing. The quarterback did not always make the right decision and neither did the fullback. We left many a ball on the ground at McCants Field at practice in the early going. The decision described by Malzahn's offense is the same decision as described in the wishbone offense. There is a delicate "mesh point" where the quarterback and the running back have the football jointly. Any mistake by either will cause a "busted play" or a fumble, which the defense usually recovers.

Before Guz Malzahn ever coached down at Auburn, we had an extensive discussion about the difficult decisions by the quarterback and by the running back. It is crucial to the wishbone offense and to the zone read offense. After pleading my case that this could be a very difficult sequence of events during a football game, he gave me his final thoughts on the subject, "that will not be a problem."

Now, back to the Texas A&M game in 2014. Auburn had first and goal from the three yard line. A touchdown wins. QB Nick Marshall ran the zone read left. The running back gained two yards. Now, it was second and one for the win. Same play. Marshall rode the running back, but, this time he tries to keep the ball, the running back tries to hang on to the ball, and Gus Malzahn's future was defined that night in Jordan Hare Stadium before 87,000 screaming fans. The ball fell harmlessly on the two yard line. Texas A&M recovered. Game over! Not a problem?

Guz Malzahn's career has been up and down since that Texas A&M game in 2014, haunted by inconsistency and confusion, two things that will kill any football program. His SEC record at this writing is 27-21 after five and one half seasons. His overall record is 55-28. That means that Malzahn has won 28 non conference games. Go back and look at the Auburn schedule for the last five and one half years and study the non-conference teams Auburn has beaten.