Alabama has had a special season so far, even measured by Alabama standards. They started the season ranked number one and have maintained the ranking every week of the 2018 season. If the Tide can beat Georgia in the SEC Championship Game, win two games in the four team national championship playoff, it will accomplish a feat that not many teams have been able to do. They will have gone through the entire season from start to finish ranked number one. They also will be 15-0, a record that has only been reached by Alabama, Ohio State and Clemson. Speaking of Clemson, the purple and orange Tigers could be the biggest stumbling block in Alabama's quest for the national title. With Alabama finishing at number one and Clemson finishing at number two, they would both be forced to win their first round games in order to meet, regardless who their opponents are. Incidentally, Alabama and Clemson were favored in every game of the 2018 season. If Clemson meets Alabama for the champ-ionship, Alabama will be favored by a touchdown.

There is no real "secret" to Alabama's success under Saban. Their unbelievable domination of college football is a combination of factors. One is that Coach Saban expects his team to be of championship caliber. That expectation is no "pie in the sky" attitude. He teaches his players and his coaches to expect perfection from every player. Of course this is not humanly possible but it creates almost perfect execution from Saban's players. It was the great NFL coach, Vince Lombardi of the Green Bay Packers who coined a phrase that is copied by great coaches today. When Lombardi took over the Packers in 1958, they were as bad as a professional team could be. At the Packers first team meeting, Lombardi empathetically declared, "We will relentlessly strive for perfection, and in doing so we shall achieve excellence." The Packers won several NFL titles and won the first two Super Bowls in 1967 and 1968.

No one is privy to what Nick Saban says in his team meetings, but whatever he says, it must be similar to the message used by Vince Lombardi sixty years ago. Formations change, rules change, players change... but football never really changes. Success comes in the pursuit of perfection.

greatest recruiter in the history of college football. Saban will never put a team on the field where his players are not superior to the opponents players. He knows how to recruit nation-wide, which obviously includes Hawaii. He has a system that is just superior to the systems of other coaches. If I knew what it was, I would not be writing this article. When you have the "best" players and you coach them to pursue perfection you get excellence. Excellence = Alabama Football. How long can it last? Who knows? In his late sixtys (67), Saban looks like a man in his late fortys. He can't coach forever but the "quittin' place" is up to him. He certainly does not need the money. He is already the richest football coach of all time.

The third reason for Saban's success is an approach where he gets the coaches and the players focused completely on the success of "The Team." In his world, nothing can get in the way of the team. If a coach or a player is not in the program for the team, Saban drops him, as in Lane Kiffen just before the 2016 championship game that Alabama lost to Clemson. In his mind it was a decision he had to make because of his "team concept." I believe that his decision cost Alabama the championship. Yet, I applaud the decision. Saban is on the brink of winning two national championships since that decision. 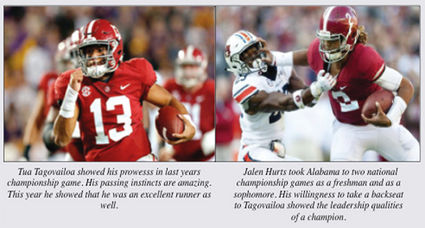 All great coaches apply the three principles mentioned above. Some are just better at doing it than others. I just can't resist telling the story of a great friend, Coach Vince Dooley. In 1979, Dooley printed T-shirts that read "There is no I in team." This was the first time that I had seen a college coach make his players wear a motivational message at practice and under their pads in games. "Dooley's Dogs" won the national championship for Georgia the next year (1980). Saban would have been a young assistant coach at the time. I'll bet he had heard the story. Saban has surpassed Dooley, Bowden, Paterno, Bryant and Rockne. He knows how to teach "team" better than all of them.