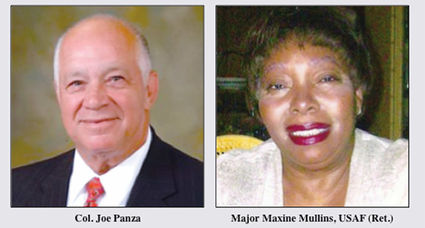 Col. Joe Panza serves as the Executive Director of the Air University

Foundation at Maxwell Air Force Base. His distinguished military career

encompassed 34 years of service in the U. S. Navy and the U. S. Air Force. At age 17, he joined the Navy as a Communications Technician with the Naval

Security Group with oversees tours in Hawaii, Okinawa and Japan. After being discharged with the rank of Second Class Petty Officer (E-5), he worked for IBM for one year before graduating from San Jose State University as an Air Force ROTC Distinguished Graduate with the rank of 2nd Lieutenant. Completing his pilot's training at Vance AFB, OK, in 1966, his first assignment was flying the C-131 Samaritan an, Aeromedical Evacuation aircraft, at McGuire AFB, New Jersey.

After one year, Col. Panza received orders for Vietnam and was assigned to a Combat and Search and Rescue Helicopter Unit, the 40th Aerospace Rescue and Recovery Squadron. After transitioning from fixed-wing aircraft to helicopters, he was sent to Eglin AFB, FL, for combat crew training for proficiency in combat tactics, air-to-air refueling. He served for one year with the 40thARRS based at Udom Royal Thai Air Force Base, Thailand. Their call sign was JOLLY GREEN. Col. Panza participated in a number of combat rescues during his tour of duty in Southeast Asia. Over the course of the war in Southeast Asia, the Jolly Greens rescued thousands of aircrew personnel preventing their deaths or captures.

One of Col. Panza's dangerous assignments was the rescue mission to pull everybody off of a 5,600 mountain where a top secret radar site, Lima Site 85, a covert mission of the U. S. military and CIA to conduct surveillance and support operations against North Vietnam, was under attack. Eleven men were lost during the attack, the largest single ground combat loss of United States Air Force personnel during the Vietnam War. One of the radar technicians, CMSgt. Richard L. Etchberger was killed during the rescue operations and was subsequently awarded the Medal of Honor for heroism by President Obama at a ceremony at the White House which Col. Panza attended. Following his attendance at the White House ceremony, Col. Panza initiated the CMSgt Richard L. Etchberger Team Award which was established at the Air Force Senior Non-Commissioned Officer (SNCOCA) at Maxwell-Gunter AFB. Col. Panza has presented the Etchberger Award to the winning team at each class graduation since 2011.

Another significant mission was a highly contested rescue effort of a Forward Air Controller who had been shot down over Saravane, Laos. His helicopter endured 75 small arms hits from ground fire causing sustained damage to the main servos, hydraulic and fuel systems and rescue hoist, and one crew member was wounded. Col. Panza was hit between the shoulder blades; however he was saved by the titanium seat that stopped the bullet.

After completing his combat service, Col. Panza flew the C-141 Starlifter at Norton AFB in San Bernardino, California where he accumulated over 2,200 flight hours with the majority of time spent in flying across the Pacific in support of the war in Vietnam. Col. Panza was a member of the C-141 crew that picked up the moon rocks at Johnston Atoll and delivered them to the Houston Space Center in Texas after the splashdown of Apollo 11 in July, 1969. Col. Panza also flew two missions in 1973 in support of "Operation Homecoming" following the release of our POWs from Hanoi where many had been held captive for more than eight years.

Col. Panza attended the Air War College at Maxwell AFB graduating in the Class of 1984. He was then assigned to the United States Air Forces Europe (USAFE) as Assistant Chief of Staff and subsequently as Executive Officer to the Commander USAFE at Ramstein AFB, Germany. He completed his five-year overseas tour in Europe as Commander, 7274th Air Base Group, RAF Chicksands, England, and returned to Maxwell AFB where he retired in 1992. His distinguished career included over 4,200 hours flying the T-37, T-38, C-131, H-19, HH-3, C-141, T-39, and T-29. His awards and decorations include the Distinguished Flying Cross, (w/2 OLCs), the Air Medal (w4 OLCs), the Defense Meritorious Service Medal and the AF Meritorious Service Medal (w/1 OLC) among others.

Since retirement, Col. Panza has been honored by the Pararescue Association by inducting him as an Honorary Pararescueman, and he was inducted as an Honorary Chief Master Sergeant by the Maxwell-Gunter Chief's group. He continues to be active in the Air Force Association, and for three consecutive years, was awarded the AFA Medal of Merit and was named the AFA Montgomery Chapter 102 Executive Council Member of the Year. In addition, Col. Panza has been awarded the AFA Exceptional Service Award and the National AFA Presidential Citation. He holds membership in the Military Officers Association of American (MOAA), the Veterans of Foreign Wars (VFW), the Order of the Daedalians, the Jolly Green Association, the Montgomery Area Chamber of Commerce's "Wright Flyers." He is the past Chairman of the Board of Governors of the Capital City Club, Montgomery, AL, and has recently been chosen as a National Honorary President of the "Silver Wings."

He has two children and three grandchildren. His dog, Frankie, lives with him at Montgomery, AL.

Major Maxine Mullins, USAF (Ret.) served as a nurse in the United States Air Force for over 20 years (1970-1991). Because of a persistence recruiter for the United States Air Force who had initially been interviewing her brother, she later became interested in joining the Air Force. After working for a short period in Bronx, New York, she returned to her hometown of Opp, Alabama, and immediately joined the Air Force as a Second Lieutenant. Maxine's initial assignment was Robbins Air Force Base, Georgia. Her next assignment sent her across the Pacific Ocean to Clark Air Base, Philippines (1972-1973). During this period, she cared for assigned personnel and family members. She also cared for wounded military personnel from Viet Nam and served as one of the nurses who cared for the POWs upon their return during Operation Homecoming. She separated from the Air force in August,1973, and went to work at D.C. General Hospital in Washington, D.C. and then returned to service in the Air Force in January,1974. She was assigned to Lackland AFB, Texas, followed by an assignment as a nurse recruiter in Northern New Jersey. Upon completion of her recruiting assignment, she returned to Clark AB, Philippines, as a flight nurse caring for patients requiring medical evacuation to and from hospitals in Southeast Asia and Northern California. Maxine's later assignments were Keesler AFB, MS. and March AFB, CA, as an Emergency Service Supervisor and an Outpatient Department Clinical Coordinator. Major Maxine retired from the Air Force in 1991 and returned to Alabama. She continued to work as a nurse in the civilian community. Her nursing positions included home health nursing, nurse education coordinator and nurse educator. Maxine taught nursing at Tuskegee University, voluntarily taught CPR classes and assisted with Advanced Cardiac Life Support classes at Jackson Hospital at Montgomery, AL.

Maxine was born in Opp, Alabama, June 10, 1947, where she attended Covington County Training Schools. She graduated from Woodson High School, Andalusia, Alabama, in 1965. She earned a B.S. Degree in Nursing, Dillard University, New Orleans, LA., MSN, Nursing Education, Troy State University, Montgomery, AL., and a Post-Masters in Primary Care, Adult Health Nursing, University of Alabama at Birmingham, AL. Even as a little girl, she wanted to become a nurse with the aim of caring for and helping people. She worked for a brief time at Opp Mizell Memorial Hospital, and then went to New York City where she worked at Montefiore Medical Center, the University Hospital for the Albert Einstein College of Medicine in the Bronx prior being commissioned as a Second Lieutenant in the Air Force.

In reflecting upon her military career, Maxine thinks that the military nurtured what she already was. An example of her service to others was a time that she successfully encouraged a veteran who had become a homeless drug addict to seek rehabilitation and turn his life around. As a cancer nurse, Maxine was a life-line to families who had relatives affected by cancer. She thanks God for giving her the patience and fortitude to care for others.