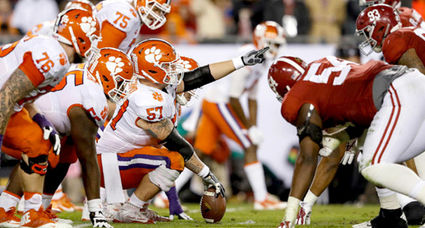 The magic is gone. Tua Tagovailoa is human after all. Coach Dabo Swinney had his Clemson Tigers so prepared for The National Championship Game with Alabama, there was nothing Nick Saban could do that would stem the onslaught of the Clemson defense. Alabama had the football inside the red zone enough times in this game to have won it. But, the inept play selections and the adept Clemson defense turned the Tide away over and over again. Meanwhile, freshman quarterback Trevor Lawrence did his impression of Peyton Manning every time Alabama mounted a comeback. Manning is Lawrence’s idol. I could not tell the difference Monday night; January 7th, a day that will live in infamy with the followers of the Alabama Crimson Tide.

Never in my memory has an Alabama team been dominated like they were in this game. One must go back to the last game of the Coach “Ears” Whitworth to find a similar foray of errors. That year, Auburn beat Alabama 40-0, which catapulted the Tigers to the 1957 Championship.

Most Alabama fans are too young to remember the details of that game in 1957. But, they will forever remember the beat down Alabama suffered on January 7, 2019. This comedy of errors will also be imbedded in my football mind as the worst loss an Alabama team has ever suffered. There was so much at stake in this one. First, the national championship was on the line. A win would have given Nick Saban an unprecedented seventh national title. This would have cemented the concept that Saban is the “greatest coach of all time.” He is still tied with Paul W. “Bear” Bryant at six national championships. Also, the winner would be the first 15-0 team since Penn in 1897. Most people will hang on to the idea that Saban is the greatest coach of all time. It is a title that is difficult to convey on a coach because of the difference in the way football is played today. The rules are much different. The players are much different. The rewards are much different.

Prior to the four team play-off, the NCAA finally agreed to a two team national championship game in which a “committee” would start ranking the teams at mid-season and at the end allow the two top teams to play for the official NCAA National Championship. This worked well until too many SEC teams played in the game, winning eight of the first ten games. Then the NCAA, under pressure from the member schools, formulated the present four-team play-off, which satisfied everybody but the fifth and sixth team. There is now talk underway to expand the teams to eight. This will only result in unhappiness and dissatisfaction from the ninth and tenth team. It is my opinion that the eight-team play-off will not occur. Without going into minutia on the subject, let me say that is also my opinion that the eight-team play-off would lessen the importance of the regular college football season. College football is at a crossroads anyway. Attendance is down. The television ratings are down. It is somewhat like the theory that ice cream is fantastic, but too much ice cream can make one sick, or simply tired of eating ice cream. This is where we are in the college game. The NFL is suffering the same fate but for different reasons.

Getting back to the greatest coach of all time, it is interesting to look at some of the “greatest coaches of all time.” Of course, Nick Saban is constantly compared to Coach “Bear” Bryant. The difference in Coach Saban’s record and Coach Bryant’s record is that Saban has won six national titles in 23 years at Toledo, Michigan State, LSU and Alabama (five at Alabama and one at LSU). He has amazingly won five in a period of ten years. This is unprecedented. Coach Bryant won his six national championships all at Alabama over a period of 38 years of coaching at Maryland, Kentucky, Texas A & M and Alabama (25 years). He took over four football programs that were “dead in the water.” Was it harder to win championships in Bryant’s era, or is it harder to win championships in Saban’s era? The majority of people think that it is harder to win today with the play-off system than it was when the Associated Press just voted on the national rankings. Then the team holding the number one spot at the end of the season or after the bowl games was declared national champion. It is my belief that depending on sports writers to make the right choice for the national championship is similar to playing poker. If you have a good hand, you may win if someone else does not have a better hand. In other words, would you rather play for the championship or hope that you have the best hand?

During Coach Bryant’s time, he won six championships using the voting system. But, in the years that he did not win, his teams finish 2nd, 3rd or 4th many times. He had to depend on the whims of the media to give him a championship. It is also my belief that during those years where he did not finish first, he would have won many more championships if there had been a four-team play-off. That is why it is hard for me to “crown” Nick Saban as the greatest. He could probably continue on his present pace and win nine or ten national championships during this play-off concept. He is only 67 years old. Coach Bryant died when he was 69. This humiliating defeat by Clemson may reduce Coach Saban to becoming mortal again. He can win most of the time but not all the time. If we live long enough we will know the answer.

There have been many coaches during the era of voting for the championship that could have won more titles in the play-off system. Most of them did not coach as long as Saban even (23 years).

Coach Frank Leahy at Notre Dame won four national championships in ten years of coaching (’43, ’46, ’47, and ’49). Had he coached longer would he have more than six championships? Probably!

Coach John McKay of Southern California (USC) won four national titles over a coaching career of 15 years (’62,’67, ’70, and ‘74). He was also a dear friend of Bryant. What if he had coached a few more years, and had the opportunity to get into a four-team play-off. It is my contention that he would have more than six championships.

Coach Bud Wilkinson of Oklahoma coached for 17 years and won three national titles (’50, ’55 and ’56). He won 31 straight games (’48-’50). Had he continued coaching, there is no doubt in my mind that he would have won more championships. Until Coach Bryant came along, I thought that Wilkinson was the best coach ever. He had several undefeated streaks during his tenure at Oklahoma.

Lastly, Coach Knute Rockne coached for only 13 years, all at Notre Dame. During that time Rockne won 105 games, lost 12 and tied 5. On the way to that record, “The Rock” won three national titles (’24, ’29 and ’30). For many years all coaches were measured by the standard set by Rockne. Unfortunately a plane crash after his 13th season took the life of the “immortal” Rockne. There is little doubt that if had he lived he would have won many more championships at Notre Dame.

Now, back to the Alabama-Clemson game… I mean the Clemson-Alabama game. The two teams were really mirror images of each other. Alabama had Tua Tagovailoa and Clemson had Trevor Lawrence. These are the two best quarterbacks in the country, even though Trevor Lawrence is a true freshman, and Tua is a true sophomore. It will be amazing to watch these two in the coming years. The defensive lines were even. Alabama had a slight edge because tackle Dexter Lawrence of Clemson was ruled ineligible for the play-off games. Lawrence is a high first round draft choice and was missed, but not much. The Alabama defensive line looked as though they were “gassed,” even during the second quarter. Alabama’s line looked big, fat and slow. Clemson’s line looked big, fat and quick. That was really the difference in the ball game.

Alabama’s offensive line, which was at least comparable, missed blocking assignments, made critical errors and had difficulty moving Clemson’s defensive line. Alabama started the season with a very inexperienced secondary, but by the end of the season they were playing great. Not so in this game. Clemson hit pass after pass, making it look like practice against the scout team. No Saban secondary has ever played this bad. The linebackers for Alabama had problems getting to the ball, thereby leaving too much running room for the Clemson backs. Clemson’s linebackers were not great until Alabama got into scoring position. Then they showed up. Not so for Alabama’s linebackers. The absence of outside linebacker, Christian Miller, was evident all night long. His injury did not heal in time for him to play. The running backs for Alabama were relentless. They did not go down easily and they always fought for the extra yardage. Kudos to the Tide’s running backs! Clemson’s backs matched the output of Alabama’s. It was a great exhibition by the running backs from both teams. Alabama’s touted offensive line was confused all night by the gap switches and stunts. Tua did not have the time to throw that he has had in the past. When you pressure any quarterback, there will be errant throws. Not the best night for Tua. He threw two interceptions in the first half and fumbled in the second. However, he is still as good today as he was on January 7, 2019. Lawrence played out of his mind after a shaky first quarter. The Alabama pass rush just did not faze him, which really gave Clemson the edge. Clemson just made more plays than Alabama when they had to.

There will be speculation that Coach Saban has passed his prime. Don’t believe it. He will not ever forget this game. It will actually make him better. Whether or not he can sustain the pace he has been on is something to think about. But, that will not be relevant until next year. Alabama will be knocking on the door again. The bad news is Clemson and Coach Dabo Swinney will be on the other side of the door.