Can a city such as Birmingham decide to remove existing historical markers or monuments if the city feels it should no longer honor them? 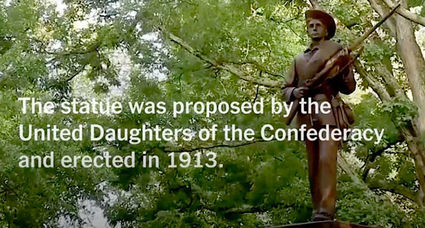 I am sure you are referring to the reaction of the past few years mostly to mentally unstable individuals who have committed crimes of murder and hate and shown to wave the Confederate battle flag believing it to be a sign of supremacy and racism.

For a bit of history, about 122,000 Alabama men served the Confederacy in the various segments of its military. Of those it is believed that about 35,000 died during their service leaving about 20,000 widows and 60,000 orphans. Dependent on the age of the Alabama soldier, I would suggest 6-7 generations of descendants have been born since that time. Of course a couple of the older generations have completely died off and many in the older pre-WW II generation have not passed on. Extrapolating that out with only an average of two children produced from each generation still leaves hundreds of thousands of descendants now living, spread not only throughout this state and country, but even parts of the world. Without a doubt there are some that may know of their descendancy and either do not care or have reached the opinion that there is some reason not to honor their blood kin. Some because of the slavery issue that many educators, media and activists have propagated as being the only cause of the War Between the States.

Confederate soldiers did their duty to defend their country from northern invaders who in some cases pillaged, burned homes and committed crimes against non-combatants, free and slave. Consider that most battles occurred in the South and exacted heavy tolls on cities like Atlanta and Richmond and left supplies short through the rest of the South. Even with former foreign enemy combatants of the United States, descendants of soldiers may honor their kin that did their duty without being involved in criminal action. I had ten lineal

descendant great-great or even great-great-great grandfathers, which fought for the South. Some endured injuries, some capture and imprisonment, and even one died of disease the day after his fortieth birthday. I do honor each of them. Only those men that are descended from Confederate veterans and a part of the Sons of Confederate Veterans and those women also descended that are members of the United Daughters of the Confederacy have rights to use the Confederate flags and then only as symbols of heritage, respect and NEVER hate. The memorials and plaques placed in various Alabama cities are for those hundreds of thousands that care that their Confederate ancestors have been honored. It is fitting that other groups who have had landmarks and memorials placed on public property to honor their heroes and heroines should also remain and be maintained. Those so raised on public property should not be discarded or dismantled in weakness when politicians feel years later that it affects their voter base. Consider former Birmingham Mayor William Bell who was defeated a year after his order to cover a Confederate monument. I don’t know if his actions played a part in his defeat especially since he was replaced by another individual in his own party.

The Alabama Memorial Preservation Act was signed by Governor Ivey in May of 2017. It provides for the security of memorials, etc. that are greater than 40 years of age, for those 20-40 years certain protections and a process for review and certain considerations for memorial named schools greater than twenty years old. There is a $25,000 fine for each violation.

In August 2017, then Mayor William Bell of Birmingham ordered the Confederate Soldiers and Sailors Monument in Linn Park first covered in plastic and then by plywood. The Alabama Attorney General then filed suit against the city for violation of the Memorial Preservation Act. In January 2018, Alabama Tenth Circuit Judge Graffeo (D) issued an order only twenty minutes before his retirement started which basically said that the State could not control the free speech of a city and that the fine allowed for no due process and was overbroad. State Sen. Gerald Allen, a co-sponsor of the Bill said: “Under the Constitution, judges are to be neutral umpires who apply the rule of law fairly. A judge’s personal beliefs, whether about politics, sociology, or history, have no bearing on how he is to apply the law. Judge Graffeo has taken it upon himself to know and declare that it is ‘undisputed’ that the majority of residents of Birmingham are ‘repulsed’ by the Linn Park monument, and has thus ruled the Alabama Memorial Preservation Act void. But judges are not kings, and judicial activism is no substitute for the democratic process.

An appeal to the Alabama Supreme Court provided for a stay in mid February on Judge Graffeo’s ruling. Attorney General Steve Marshall was pleased and said, “The Supreme Court’s stay allows the Alabama Memorial Preservation Act to remain in effect until the Supreme Court resolves this appeal over the Act’s constitutionality. We continue to hold that the Circuit Court erred when it ruled that the U.S. Constitution grants cities free speech rights that they can enforce against the State. For more than a century, the U.S. Supreme Court has held just the opposite, recognizing that ‘a political subdivision, created by the state for the better ordering of government, has no privileges or immunities under the federal constitution which it may invoke in opposition to the will of its creator.’ We look forward to presenting these arguments to the Alabama Supreme Court.”

Memorials placed with permission on public property should be honored and not removed or defaced just because the political leaders become emboldened by change in political climate. Short of compelling information that an honored hero or heroine committed a heinous crime, there is no reason to attack a memorial so approved by local or state government whether we find favor with that memorial or not.