A Starr Has Fallen 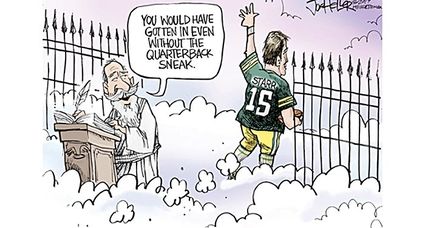 Bart Starr has fallen many times during the last few years, mostly due to heart attacks and strokes. On Sunday May 26th, he fell for the last time in Birmingham with his life partner by his side. Cherry, his wife of 66 years, has been his loyal care giver since 2014 when the physical problems began. They moved to Birmingham after Bart’s final retirement from the NFL. They operated several businesses during that time under the corporate name of Bart Starr Enterprises. They were all successful of course like everything else Bart was a part of. Bart died at home in Birmingham but his heart was always in Montgomery where he was raised. Bart Starr was 85. There is so much to be said about Bart that it is hard to find a place to start. Almost every native of Montgomery and every citizen of Green Bay, Wisconsin knows a lot about Bart Starr. They know all about who he was and what he has done. I think for my tribute to Bart, I will tell about who he was not and what he did not do.

Bart was not born to be a great football player. I think that the first position he played on a team was at guard. That was because Ray Scott, of Bass Master fame, got up enough money from Montgomery merchants to buy the football jerseys needed to participate in the YMCA Youth League. Ray, being Ray, decided since he raised the money, he should be the quarterback and Bart should play guard. That was the last time Bart played guard and also the last time Ray played quarterback.

In junior high school, Bart was a skinny little kid who was trying to find a place to play. He developed an ability to kick the football so he became the punter for the Baldwin Tigers. He was not very fast so he began to try his hand at quarterback. His friend Richard Fulmer was the fullback and star of the team. He did his best to protect Bart because of how little he weighed. But, Bart took to football like a duck on water, even though there seemed to be little future in it for him. However, Bart started growing and by the time he got to the 10th grade he was about 5-10 and about 140 lbs. This was not an indicator of a potential All-Pro NFL quarterback, but it was a start in the right direction. Bart’s daddy was a master sergeant at Maxwell Field. So he had a little time in the afternoon to toss the ball around with Bart. Ben took an old tire and hung it from a rope in the back yard. He helped Bart get started passing the football at the hole in the tire. Bart must have thrown 10,000 passes at the hole in that tire. He got very accurate as a result and began to have confidence in his ability to play quarterback. In 1949 Bart finally got a break. Coach Bill Moseley was hired as the head coach at Sidney Lanier High School. Moseley played at Kentucky before World War II. He came back to Kentucky after the war to finish his eligibility and his education. By that time Coach Paul “Bear” Bryant had been hired by Kentucky. In 1946, Coach Bryant made Moseley his fullback and the captain of the team. I saw Bill Moseley and Bryant’s ‘46 team play Frank Thomas’ last Alabama team in Cramton Bowl in 1946. I remember the game well. Alabama won 21-7. I was only eight years old and had no clue that Moseley would be our coach one day.

Coach Moseley had a lot to do with the success of Bart Starr, but so did his dad, Ben Starr. Mr. Starr was a tough career Air Force Master Sergeant who knew how to get things done. He was tough on Bart as you can imagine. Bart didn’t get away with much at the Starr household. One of the defining moments in the development of Bart occurred during his first year at Lanier. Mr. Ben came home one afternoon during football season to find Bart in the den. He ask him why he was not at football practice. Bart said, “I quit.” Mr Ben said, “Why.” Bart said, “I’m better than the other quarterbacks and I’m not gonna sit on the bench anymore.” Mr. Ben said “Git in the car.” Ben took his boy to the Lanier gym. He found Coach Moseley. Ben said, “Coaich,” Bart seems to have made a mistake. He wants to talk to you about it.” With that he left and went home. That was the last time Bart thought about quitting anything.

Bart was playing behind a quarterback named Don Shannon. Don was number 20 and Bart was number 21. Shannon was a senior who was also a good athlete. He was doing well until an injury opened the door for Bart. Shannon was a friend of mine who lived on the same street as I did. We played touch football in the street. So, he was a favorite of mine. But, one night at Cramton Bowl in the second half of a game against Tuscaloosa, Don ran an option to the left and was tackled very hard on the sideline. His leg was broken. Tuscaloosa was ahead of Lanier at the time. As an eight grade wee football player, I was devastated that Shannon was out for the season. In came a tall lanky quarterback wearing number 21. His name was Bart Starr. I did not know anything about him. I didn’t need to. He knew a lot about himself. Starr marched the Lanier team down the field to the winning touchdown without a single penalty, mistake or even a pass if my memory is correct. Bart was not born a star, but a Starr was born that night.

With Coach Moseley’s connections and the fact that Coach Bryant wanted Starr to come to Kentucky, a very important agreement was made after Starr’s junior year. He would spend a few months in Lexington working out with Bryant’s All-American quarterback, Babe Parelli. This is where Bart honed the skills that would one day put him in the NFL Hall of Fame. With Bart at quarterback, Coach Moseley’s Lanier football teams only lost two games.

Somewhere in here, there comes a pretty young coed at Lanier by the name of Cherry Morton. Bart was confident but shy especially when it came to girls. He told his friend Richard Fulmer about Cherry and how he would like a date with her. Richard told him to ask her. Bart said, “I don’t know if I can.” At which Richard said, “I’ll get you a date with her.” He did. They double dated and the future was set for Bart Starr. He has said may times. “I have never met a woman quite like Cherry.” I don’t know if he ever looked at another one.

Bart was trying to decide to go to Kentucky while Cherry went to Auburn. Football

at Kentucky and Cherry in Alabama just didn’t fit well in Bart’s mind. So, he told Coach Bryant that he had decided to go to Alabama. That didn’t sit well with Bryant. As head coach in the Blue-Gray Game in 1955, he hardly let Bart play at all. However, Bryant did quite well without Starr and Starr did quite well without Bryant.

Coach Red Drew had recruited Bart to play at Alabama. Drews teams were doing well at the time. He brought his great ‘52 team to Cramton Bowl to play Mississippi Southern coached by the famous Pie Vann. It was a fairly close game for three quarters. With Alabama leading 14-7, I was thrilled when Coach Drew let the freshman Starr take the team on a drive to its last touchdown. Bart Starr and Nick Germanos had been the stars of that famous Lanier team of ‘51. Nick also signed with Alabama and played four more years with Bart. He played end for Coach Drew.

In my opinion the Gates of Heaven opened up Sunday, May 26th and took in a fallen Starr!

Great article Ed. I subscribe to the Ala Gazette. Live in Issaquah, WA. Born in Ragland Al., lived all my life in Fl. Love the Tide. Relatives all over Ala. and Fl. Enjoy the Gazette and the positions it takes on many social and political issues. Thanks Ed for all you do and your work writing for the Gazette. Keep up the good work. Go SEC football!