"Work and Witness" Mission in Cuba 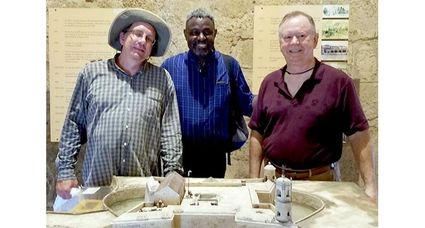 Fifteen members of the Church of the Nazarene, most from the Alabama South District, visited Cuba on a “Work and Witness” mission in June. We were able to provide labor and supplies to assist with painting and refurbishing a church in the Havana area of Juanelo, as well as experience the people, culture, and country of Cuba. Visiting with the pastors of numerous churches throughout Cuba provided the opportunity to reflect on the work of the Church in the world. Witnessing first-hand the impact of a pervasive and unchecked government provided the opportunity to reflect on the ramifications of the civic and political structure of that world.

Cuba has experienced four separate eras since the 16th century. Spanish explorers and colonizers began arriving in Cuba in the late 1500s. Numerous forts, cobblestone streets, cathedrals and squares constructed by the Spanish still remain in Havana. Cuba remained a colony of Spain until 1898, despite frequent wars for independence. The Spanish-American War saw Cuba freed from its position as a colony of Spain and an independent republican form of government established, albeit one with significant United States influence. The majority of existing residential structures in Havana and other significant cities were constructed during this time of U.S. influence, which ended in 1962. Fidel Castro then assumed control of the Cuban government in a violent revolution and installed a Communist regime. The Soviet Union began providing aid to the tune of one billion dollars each year, which was used to construct large and drab apartment complexes and water towers. When the USSR ran out of other people’s money and collapsed, Cuba suffered from the lack of financial support. Beginning in the early 2000s and accelerating in 2012, the Cuban government began to ease off a bit on the centralized control of the every day economic life of the Cuban people. Coinciding with this has been the construction of large, modern resort or motel type structures built by the Cuban government to meet the demand for tourist housing.

While government still controls virtually all industry and business and provides housing and food rations to the Cuban people, when available, some private wealth is being built. Some free market ventures in the form of small restaurants or Airbnb rentals are permitted, which is opening new opportunities for the Cuban people.

Nevertheless, the Cuban economy remains constricted and depressed under the socialist structure of the Cuban government. Virtually anyone who works, be it in agriculture, tourism, or healthcare, works for the government. So not only does government get to decide who should be able to obtain employment, but also how much each should be paid. Cuban doctors are paid the same as Cuban waiters and innovation or job performance has little to no impact upon this pay. The purpose of work, in the view of the government, is to benefit the community or society as a whole, rather than the individual providing the good or service. As a result workers are alienated from the product or fruit of their labor. The physician who spends eight years in medical school and provides excellent care is compensated the same as the waiter who takes a nonchalant approach to their duties. This results in a drain on talent and skills from the country as those who are the highest skilled seek opportunities to leave to provide their labor in a market that will compensate them for their efforts and abilities.

The Cuban Constitution provides that housing is a right and that no Cuban citizen can be removed from their home. While this works well for those already housed, there is no incentive, or opportunity, for a private sector builder to construct housing to meet demand. As a result there is a housing shortage in Cuba. The government is occupied in building tourist housing and Cuban citizens are left to find abandoned homes to rebuild and make livable or Soviet built apartments if they become available.

One of the most significant areas the all-pervasive impact of the government is seen, especially in contrast with our approach in the United States, is the perceived role of a minister. U.S. culture views the occupation of a clergyman as one of the ten most respected occupations in society, with 62% of Americans saying the role of the minister is a prestigious position. We arrive at this societal view through the individual choices of the populace at large. Some people hold ministers in contempt, some are ambivalent, and some hold them in high regard. The cumulative input of us all, however, results in a societal view that is positive regarding the clergy. In Cuba ministers are viewed as leeches on society.

Ministers do not produce a needed good or service, they merely take whatever those who are foolish enough to attend church are foolish enough to place in the collection basket. When one becomes a minister in Cuba, that individual is prohibited from participating in Cuba’s retirement system and banned from obtaining other employment. Until recently the children of ministers were restricted from preferred universities and jobs. This is not necessarily due to the cumulative view of the people of Cuba, however. Fidel Castro held this view of ministers. Whether it was due to his atheistic leanings as a Communist or unpleasant experiences with the Catholic Church as a child he held this view, thus government in Cuba held this view, and as a result it became the overall approach of the society. When government derives its power through force, rather than through the consent of the governed, the views of the few can be imposed on the many.

Despite the challenges faced by pastors in Cuba, churches are advancing the Gospel message. Church buildings of evangelical churches are typically small. Due to space limitations, especially in urban areas, and the difficulty in obtaining building supplies, there is little opportunity to expand. As a result the many churches we visited looked as if they could comfortably hold 50 to 70 people. Their actual attendance, however, was usually double the number they could comfortably seat. Churches in Cuba are full and are often quite close together. Given the difficulty in transportation and the absolute absence of parking most people attend a church within walking distance. As a result a small church of 70 may meet on one block and another church of 70 or so will meet just a couple miles away, each serving the people of its immediate community. Churches are largely free to conduct services within their buildings and in members’ homes or established church ministry locations free of government interference. Meeting in public locations including parks and evangelistic activities like showing the Jesus Film, which our team wanted to do, require extensive permits and advance planning. In most cases, this activity is difficult to accomplish.

Churches in Cuba are growing, however, demonstrating that while evangelistic activities may be hampered, the Word of God is not bound! (2 Timothy 2:9)

Our experience in Cuba highlighted concerning trends in our political direction at home. The absence of individual liberty in Cuba has resulted in a lower standard of living and an economy in recession, although such terms are not really applicable to the type of stagnation seen in Cuba’s economic activity. The Revolution was presented to the Cuban people as a means of obtaining greater equality in economic conditions and, to characterize it bluntly, free stuff. This Revolution was accomplished with significant violence and resulted in the murder of some 7,000 to 11,000 Cubans. While the violence was integral to the establishment of Fidel Castro as a Communist dictator, at the same time it was also accomplished by the acceptance of the populace at large in exchange for the promised economic equality and free stuff. In the political campaigns of our day the same message can be detected. It is often couched in such terms as Medicare For All or free college or ensuring “the rich” pay their “fair share.” Nevertheless, the unspoken outcome remains the same. Individual liberty is to be surrendered for centralized planning and control. While Cuba appears to be headed away from this condition, admittedly in incrementally small steps, the United States appears to be headed toward it, perhaps at a more rapid pace. Given the absence of understanding of history, economics, and human nature which appears to characterize such large swaths of our population it may be that our nation provides a different answer this time to the rhetorical question: Is life so dear or peace so sweet as to be purchased at the price of chains and slavery? It may be a simple yes. One of the most frustrating aspects of our national political conversation is the traction obtained by arguments for centralized planning and governmental tyranny coinciding with existing demonstrations of the tragedy of such policies.

This short visit to Cuba was a great experience. Enjoying the sights and sounds of a Caribbean island away from the tourist trap locations and mingling with the Cuban people was the most rewarding part of the journey. While it was enjoyable it was also enjoyable to return to a society that currently offers greater religious and economic freedom. Let us do what we can to ensure it remains that way.